It's Hard To Be Free

That's what the Silver Fox said to me this morning. We were discussing the calls for a permanent security fence around the US Capitol--the "People's House" as Pelosi likes to call it, except she doesn't want the people inside. Nor does she want members exercising constitutional rights inside. No word yet on whether Trump--a real expert on building security walls to keep people out--will be called in to help. And then there's the matter of what the Silver Fox calls the Standing Army of the Potomac--the same people who want We The People fenced out of the "People's House" also want a permanent presence of this new Army of the Potomac inside the Imperial City.

Nothing quite says "Unfree" like these types of very visual measures. As we discussed yesterday, it seems clear that the Globalist Left is gearing up to impose the Great Reset in America by Executive Order so far as possible, and efforts to ram other measures through Congress are only a matter of time. The bailout of bankrupt Blue jurisdictions--school districts, cities, possibly even some states--is certainly being contemplated. 'Plotted' may be the better word, since to ram this through Congress may well involve measures--as with Obamacare--that will shred what little remains of our constitutional order.

But of course there's more. The brazen censorship--for practical purposes--and increasingly the spectacle of people being fired for their ideas. Or even for their suspected ideas--did you read about the woman who was fired by a literary agency because ... she had accounts on Parler and Gab? Of course examples of this sort--going back years (think Brendan Eich, for starters)--could be multiplied. Many normals in America live underground existences, living in fear of retribution for their beliefs during their public time on the job or even just associating with anyone except their nearest and dearest. There's more than just a whiff of burning witches in the air.

Enabling this is Big Tech--most of us live in what amounts to a total surveillance state. Most Americans are spied--actually or at the least potentially--by the technology they have freely chosen to surround themselves. If you have a device with a microphone and/or camera and can be connected to the internet--it can be used against you. Your movements, of course, can be tracked--even ex-bartender AOC warned her followers not to bring phones to protests. But tracking your movements is, in many ways, the least of the surveillance. As we know so well. And yet this surveillance is largely self imposed. We've been lulled into it because it's just so convenient and, after all, isn't there a Constitution to protect us from any abuses of this Brave New Digital World? Haha! Joke's on you!

Have you seen the NSA's Utah Data Center? The welcoming sign says so much: 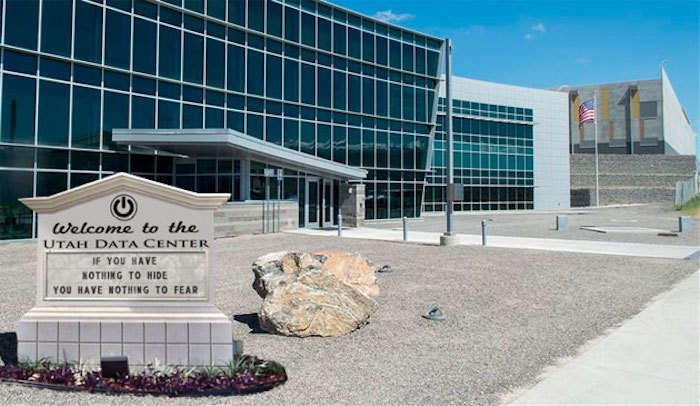 See what it says? "If you have nothing to hide you have nothing to fear." What kind of sick joke is that, in 21st century America? Isn't the real point that, from one day to the next, nobody actually knows any longer whether or not they have anything to hide? You'll be informed of whether you had something to hide by the woke mob that comes for you. As we used to say in the Deep State, whether or not you have something to hide is one of those "Need To Know" things. It's a target of inquiry that's always moving, always changing in shape and size. The sad fact is that many--perhaps most--of us live in an America where our neighbors would be quite happy to turn us in to the Thought Police.

What would Stalin have given to have had this kind of power at his disposal? The ability to instill fear into so many with so little effort and with so little resistance. A perfect metaphor for this occurs to me every day when I go for my walk. The majority of people I encounter, when they see me coming down the sidewalk, go out into the street to avoid coming within, say, 20 feet of me. A few brave souls step out onto the grass to get away from me--six to ten feet. Hardly any dare stay on the sidewalk. This fear of others is exactly what all forms of totalitarianism seek to impose on the subject population, but here in America we've imposed it on ourselves, in defiance of all science--freely available, where else, on the internet!

I have no practical advice to offer--as far as that goes, I'm trying research that myself. However, a reminder is always in order.

True freedom lies within--it's the truth that makes us free, and knowledge of the truth is a responsibility for each of us individually. That truth--which has been under relentless attack for centuries now--is the truth of the God-created order of all that exists, and above all of human nature. We must seek to internalize God's order within our lives if we are to spread the order to the rest of society. Only in this way will we find the fortitude to go on and to endure and overcome.