Is It Reasonable To Doubt The Integrity Of US Elections?

Apparently the US Establishment thinks such doubts are ipso facto unreasonable. On the other hand, US News ran an article about a month before the election that suggests that those who doubt may be on to something:

Research shows that U.S. elections have rated poorly compared to other democracies in recent years.

The report doesn't exactly say that the US is a banana republic, but it does say that our electoral integrity rates "much lower" than that of some actual banana growing republics, such as Costa Rica. If it makes you feel better, at least the US rates as well as Mexico and Panama:

A 2019 report published by the Electoral Integrity Project, an independent project based out of Harvard University, found that U.S. elections from July 2012 through December 2018 rated "lower than any other long-established democracies and affluent societies." Each country in the index was given a score out of 100 based on assessments of the quality of each of its elections – including categories such as electoral laws, voter registration and voting process – one month after polls closed.

The U.S. score of 61 – the same score as Mexico and Panama – is the second-lowest among liberal democracies and much lower than other countries in the Americas region, including Costa Rica, Uruguay and Chile.

So, yes, maybe those pro-Trump demonstrators are on to something. And maybe Trump is, too. Here are some graphics from the report that help place the US among other countries: 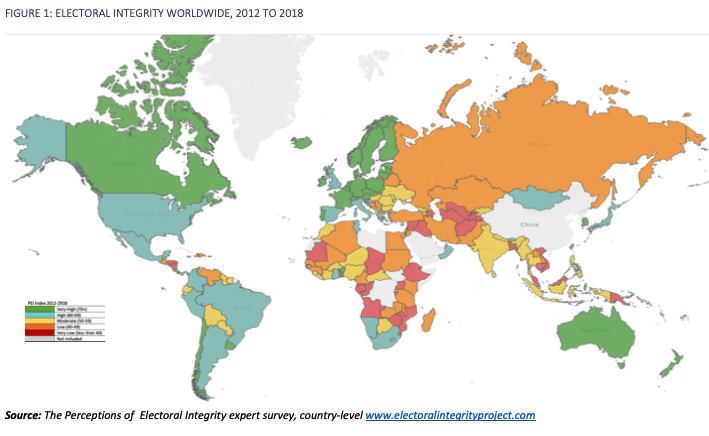 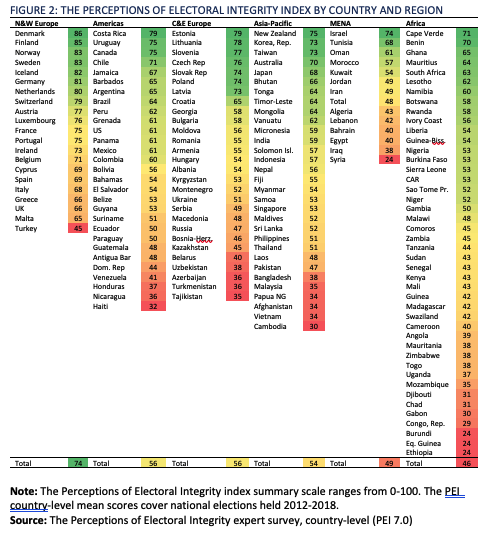 It's just something to keep in mind the next time you hear one of the usual suspects pontificating about how Congress needs to get on with the sacred constitutional business of rubber stamping, er, certifying the election.