This is Bergoglio's Game

How many times have you heard people say things like: "Bergoglio is really very traditional--he talks about the devil all the time?"

Today at Catholic World Report you can read in an article about reform of the Roman Curia--yes, a joke topic if ever there was one--the following:

[Bergoglio's] constant recommendation to pastors, that they foster and encourage popular piety and private devotion among the faithful, is water in the desert.


OK, so what's "popular piety and private devotion"? For the sake of argument, let's say that a major form would be Marian piety and especially, saying the rosary. That seems to be what the author has in mind, since he cites Bergoglio's "personal simplicity and deep devotion to Our Lady."

Question: Does "deep devotion to Our Lady" preclude a determination to utterly sweep away every vestige of an objective moral order? It would seem not, based on Bergoglio's own example. After all, Amoris Laetitia to one side, we've all seen his interviews with the atheist journalist Eugenio Scalfari, Bergoglio's chosen mouthpiece to the world. In them we can read such nuggets as this:

Another Attempted Defense of Ratzinger's Orthodoxy

Sandro Magister has published a second blog in which a writer attempts to defend Ratzinger's orthodoxy against Antonio Livi's initial critique of Ratzinger: Why Ratzinger Is Not a Heretic. As in the case of the first defense of Ratzinger that Magister published, this defense is written by a person who is not a professional, philosopher: Francesco Arzillo, "an administrative magistrate of Rome who is also an esteemed author of works of philosophy and theology." While avoiding addressing the specifics of Livi's critique of Ratzinger--which revolve around Ratzinger's concept of faith--Arzillo attempts to portray Ratzinger's views as substantially identical to those attributed in Acts to St. Paul in his address to the Greeks at the Areopagus. This metaphor has a certain significance. Paul's address at the Areopagus is regarded as a model for the Church's outreach to non-believers and an expression of the Church's natural theology, so Arzillo is using this metaphor to suggest the same regarding Ratzinger: not only is Ratzinger to be viewed as a bulwark against heretics but he's a model for outreach to non-believers. As we will see, however, Ratzinger's attempts to assimilate Paul's views to his own simply don't work. Arzillo begins his defense by quoting a number of passages from an address Ratzinger gave in Paris as Benedict XVI.

UPDATED: Bergoglio And Ratzinger: Two Peas In A Pod?

So, on January 2, "theologian" and internet gadfly Massimo Faggioli (aka "Maximum Beans) presented what appears to be the new Bergoglian talking point: an attack on Bergoglio is ipso facto an attack on Ratzinger--darling of Vatican II "conservative" Catholics. And an attack on Ratzinger is, ipso facto, an attack on Vatican II itself, since Ratzinger was one of the Modernist clique that led and directed the Council to their desired end. So, lay off Bergoglio unless you want to jeopardize the entire Ratzingerean legacy or--God forbid!--position yourselves on the "the wrong side of history": 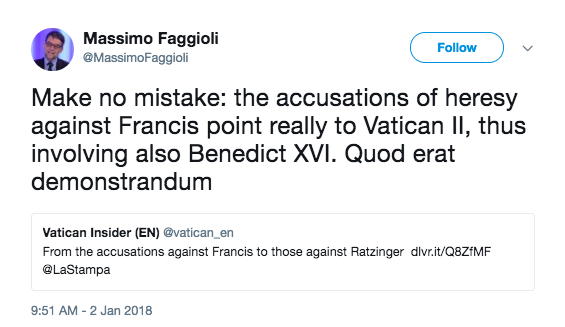 This "narrative" that Faggioli deprecates is, of course, exactly that of Antonio Livi, the Italian philosopher whose book review, L'eresia al potere (Heresy In Power), we translated and examined a couple of days ago. Livi, reviewing the new book by Enrico Maria Radaelli, Al cuore di Ratzinger. Al cuore del mondo (At the heart of Ratzinger, at the heart of the world), makes the irrefutable--because so obvious--case that Ratzinger, far from being "a providential bulwark against what he himself called the dictatorship of relativism," was (with Wojtyla) in effect a Great Enabler of Modernism in the Church in the decades that followed Vatican and throughout his own papacy:

Having written the previous post in response to the Italian lawyer who attempted to criticize Antonio Livi's critique of Ratzinger's views on faith, I did a few online searches. Those searches confirmed a number of things. One is that the world has become a very small place, indeed, with the advent of the internet. I came across an article in the New York Times by the Professor (now emeritus) whose course on Philosophy of Science I took as an undergrad.

The paper I wrote for that course argued that there is not, in fact, any such thing as "scientific method." Rather, I argued, science is simply a refinement and quantification of "common sense" methods of knowledge common to all humanity, i.e., a careful utilization of the normal methods we all use in coming to know the world around us, extended and refined by the use of instrumentation and mathematics. I received a B for that effort.

Over forty years later, my former professor authored the article I just read: There Is No Scientific Method.

A survey of Ratzinger's writing over the decades since Vatican II leads to the conclusion that his views remain essentially unchanged, to include his naive views on scientific positivism's affect on philosophy, faith, and human knowledge generally. Unfortunately, his views are clearly based on German philosophy from the 18th century that is accepted only by philosophically naive people--such as scientists and theologians. Oh--and Italian lawyers. The truth is that "modern" philosophy doesn't explain "modern" science. Kantian agnosticism is, as Etienne Gilson pointed out, an unjustifiable presupposition. Would that Ratzinger had bothered to actually read and reflect on what the Thomist Gilson had to say, rather than grousing about the scholastic textbooks he (Ratzinger) was required to read in seminary--as Ratzinger has done for the last five decades.

On Sandro Magister’s blog this morning there’s a reply to Antonio Livi's critique of Ratzinger, which I covered yesterday. Tellingly, the reply is by a lawyer–not a philosopher. Once again, the blog is in Italian: Joseph Ratzinger teologo. Non “modernista” ma moderno: “Joseph Ratzinger, Theologian: Modern but not ‘Modernist’.” The lawyer/author starts by pronouncing himself “not convinced” by Livi, but then goes on to confirm exactly what Livi said: Ratzinger rejects Thomism, rejects the very notion of praeambula fidei, and adopts instead a “modern”, i.e., Kantian, approach. In essence the lawyer is saying: It's true that Ratzinger is not Thomist and is Kantian--but (the lawyer simply asserts) that's just being "modern," (i.e., it's a good thing), not "Modernist" (which, he presumably agrees, is a bad thing, and is therefore to be denied). In fact, however, it's simple historical fact that Kantian thinking is the very basis of Modernism (cf. the links in yesterday's post, cited above).  It's important to further note, however, that in attempting to make this case the lawyer quite mistakenly identifies modern science with a “methodological atheism.”

What Ratzinger does, and the lawyer is quite explicit about this, is to accept this supposedly methodological atheism of modern science (or, more properly, its “agnosticism”) as controlling for philosophy. IOW, he accepts that "science" in the modern sense of the word is the only truly valid form of human knowledge, and he insists that the man of faith must bow to the scientific method as exclusively valid in all areas of human inquiry. Therefore, in Ratzinger’s view, belief that there is a cause for the existence of all that exists, which we call God, is and can only be an hypothesis. It cannot be a certainty because it is not subject to experimental verification, which Ratzinger implicitly accepts as the only valid form of “modern” knowledge. In this Ratzinger is both very modern and very Modernist, exactly as Livi says. (Parenthetically, it's worth noting that these views are at the bottom of Ratzinger's extreme--and frequently expressed--skepticism regarding the validity of historical critical study of both Scripture as well as history more generally, and it amply explains his preference for subjective, allegorical approaches to Scripture.)

Heresy, Thy Name Is Benedict. Or Ratzinger.

Yesterday, the Italian Vaticanist Sandro Magister--a generally mainstream, Vatican II-ish commenter whom I've always regarded as generally sympathetic or respectful towards Joseph Ratzinger/Benedict XVI--hosted a remarkable essay at his Italian language site. The essay is alluded to on the English version of his site, in the blog titled: Ratzinger Rehabilitates Müller. But the Pope Emeritus Himself Is Being Hit with Accusations of Heresy, but the essay itself, L'eresia al potere, has so far only appeared in Italian. That essay appears below in my English translation, with my own comments interjected (in brackets) and with links to other sites that provide some additional information regarding persons and topics that are mentioned.


The essay is written by Antonio Livi, and is introduced by Magister as follows:

"The attack in recent days on Ratzinger as theologian comes in a book just off the press that has as its author Enrico Maria Radaelli, known as the most faithful disciple of Romano Amerio (1905-1997), the Swiss philosopher who in 1985 published in “Iota Unum” the most systematic and detailed accusation against the Catholic Church of the second half of the twentieth century, for having subverted the foundations of doctrine in the name of modern subjectivism.

"Radaelli’s book is entitled “Al cuore di Ratzinger. Al cuore del mondo,” ... What led Radaelli to the decision to accuse Ratzinger’s theology of being subversive as well was the reading and analysis of his [Ratzinger's] best-known and most widely read theological work, ... “Introduction to Christianity” ...;

Now, what is most most striking is that Radaelli ... received immediate support from a theologian and philosopher among the most decorated, Monsignor Antonio Livi, dean emeritus of the faculty of philosophy of the Pontifical Lateran University, a pontifical academic and president of the International Science and Commonsense Association. In Livi’s judgment ... Ratzinger and his theology ... contributed to the ... ever more hegemonic role in the seminaries, in the pontifical universities, on the doctrinal commissions, in the curia dicasteries and at the highest levels of the hierarchy up to the papacy, of what he calls “the modernist theology with its evident heretical drift.”


I take this as a very positive development--both that an academic as eminent as Livi has put his name to such accusations as well as that his essay has appeared on such a widely read and respected blog as Magister's. It appears that the shock of Bergoglio's manifest heresy has sunk deeply enough that intelligent observers--who initially may have thought that the Church's crisis began only with Bergoglio--have begun to think this whole thing through and have come to the realization that the Bergoglio phenomenon can only be the fruit of long development. Livi places blame squarely on Ratzinger, who has supported heretical positions throughout his long career, beginning even in his seminary days. Of course, the roots of this crisis go much deeper even than Ratzinger and the Modernist clique that hijacked Vatican II. But this is an excellent start for reflection and important enough that I feel justified in reproducing Livi's essay in toto.
Read more »
Posted by mark wauck at 9:55 AM 4 comments: