The Thomas More Society is seeking to prevent the leftist Secretary of State from certifying the election, claiming that over 500K ballots were cast illegally in the state. PJ Media has the details:

In the wee hours of Thanksgiving Day, the Amistad Project of the Thomas More Society filed an explosive election lawsuit asking Michigan’s Supreme Court to prevent Secretary of State Jocelyn Benson from certifying the election results until the Michigan legislature can fully investigate fraud claims and to force election officials to hand over all election materials to the legislature for this purpose. The lawsuit claims that officials illegally counted or threw out no fewer than 508,016 ballots, far more than Joe Biden’s 154,000-vote margin over Donald Trump.

“State and local officials brazenly violated election laws in order to advance a partisan political agenda,” Phil Kline, director of The Amistad Project, said in a statement. “The pattern of lawlessness was so pervasive and widespread that it deprived the people of Michigan of a free and fair election, throwing the integrity of the entire process into question.”

Once again the Amistad Project is drawing attention to the role of Mark Zuckerberg. In Michigan, unlike in some other states (WI and GA) it is not alleged that this was illegal per se, however the argument is made that Zuckerberg's money disadvantaged areas of Michigan outside Detroit and specifically advantaged Democrat interests. The argument is that it was "improper" for the municipal government to engage in blatantly partisan politics by accepting the money:

In September, the Detroit City Council approved a $1 million contract for the staffing firm P.I.E. Management to hire up to 2,000 workers to work the polls and staff the ballot-counting machines at the TCF Center. P.I.E. Management reportedly paid temporary workers at least $50 per hour, far above rates in most rural communities. The lawsuit claims that this money came from Facebook CEO Mark Zuckerberg through the group CTCL, “which paid over $400 million nationwide to Democrat-favoring election officials and municipalities.”

The core argument, however, has to do with absentee ballots. Michigan law does not allow the mailing of unsolicited ballots. However:

Citing state records, the lawsuit claims that Benson’s office sent out 355,392 unsolicited ballots. Northon explained that Michigan law requires two signatures for absentee voting: a signature on an application form and a signature on the security sleeve for the ballot. In this election, officials mailed out more than 300,000 ballots that no one had requested.

Not surprisingly, this led to widespread irregularities, which the Amistad Project broke down into seven categories--including what appears to be large numbers of Trump ballots thrown away or otherwise not counted 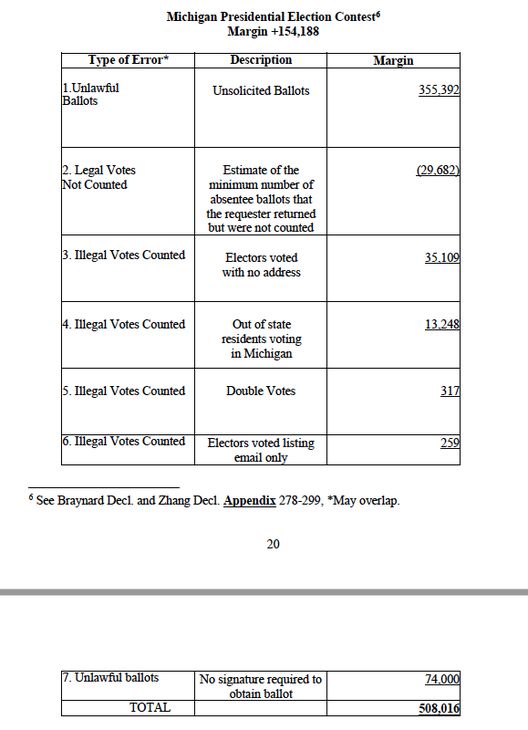 The petition was filed directly with the Michigan Supreme Court. You can read the complete petition here.