ADMINISTRATIVE: Tomorrow's my wife's eye exam day, so I'll be driving. That'll be most of the morning.

That title is a bit of a click bait thing. What I want to do is recommend some longer articles that do get into the twin issues of propaganda and who controls our government. The title comes from a tweet this morning from Dr. Robert Malone:

Roger that. The largest propaganda operation in the history of the world. https://t.co/3zkD6YlPMF

I followed that link to swprs.org, which is the Swiss Policy Research organization. I browsed around a bit, and I want to recommend, briefly, several items.

First of all, I think many will find this useful: On the Treatment of Covid-19. It's divided into three sections--prophylaxis, early treatment, and prescription only.

Now, on to propaganda. The link that I got from Malone's tweet--the quote portion--is this:

What they're talking about is the role that the three large news agencies play in disseminating the news to all of us. Or, to put it a bit differently, the role they play in disseminating to us what our rulers want us to think about in ways that they want us to think. Those three agencies are, of course, AP, Reuters, and Agence France-Presse. We all know about them, or think we do, but this article lays out the interaction between the news agencies, the media news providers, and the people who provide the news--our government. This graphic will explain this visually: 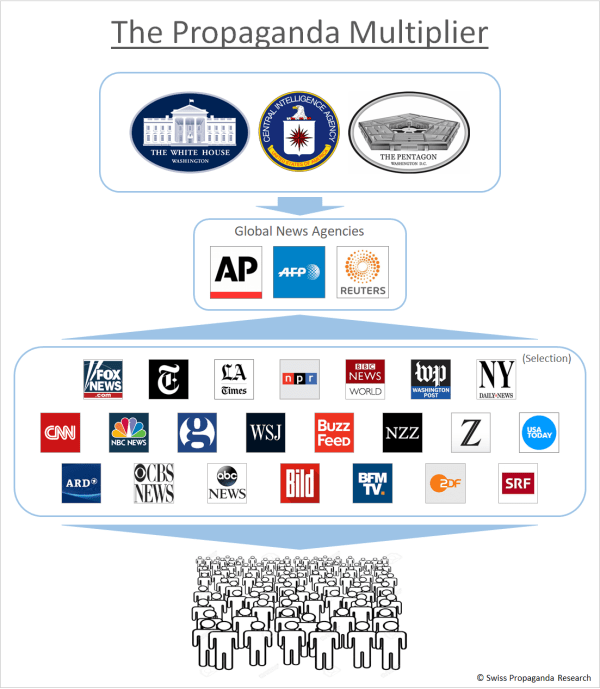 This is a long piece, so I'll insert a few excerpts that I hope will suggest that there are important issues to read about. Bear in mind that while the focus of this article is on foreign policy, there is every reason to suppose that what's being described drives the news business in all areas. So.

“What the agency does not report, does not take place”

The central role of news agencies also explains why, in geopolitical conflicts, most media use the same original sources. In the Syrian war, for example, the “Syrian Observatory for Human Rights” – a dubious one-man organization based in London –  featured prominently. The media rarely inquired directly at this “Observatory”, as its operator was in fact difficult to reach, even for journalists.

Rather, the “Observatory” delivered its stories to global agencies, which then forwarded them to thousands of media outlets, which in turn “informed” hundreds of millions of readers and viewers worldwide. The reason why the agencies, of all places, referred to this strange “Observatory” in their reporting – and who really financed it – is a question that was rarely asked.

For this next excerpt, understand that AP has about 4,000 employees--and it's the largest of the agencies.

Among the most active actors in “injecting” questionable geopolitical news are the military and defense ministries. For example, in 2009 the head of the American news agency AP, Tom Curley, made public that the Pentagon employs more than 27,000 PR specialists who, with a budget of nearly $ 5 billion a year, are working the media and circulating targeted manipulations. In addition, high-ranking US generals had threatened that they would “ruin” him and the AP if the journalists reported too critically on the US military.

That should tell a number of things, among them the high priority that our National Security establishment places on getting their agenda across in a favorable light.

But why do journalists in our media not simply try to research and report independently of the global agencies and the Anglo-Saxon media? ...

Media researcher Noam Chomsky has described this effect in his essay “What makes the mainstream media mainstream” as follows: “If you get off line, if you’re producing stories that the big press doesn’t like, you’ll hear about it pretty soon. () So there are a lot of ways in which power plays can drive you right back into line if you move out. If you try to break the mold, you’re not going to last long. That framework works pretty well, and it is understandable that it is just a reflection of obvious power structures.” (Chomsky 1997)

Nevertheless, some of the leading journalists continue to believe that nobody can tell them what to write. How does this add up? Media researcher Chomsky clarifies the apparent contradiction:

“[T]he point is that they wouldn’t be there unless they had already demonstrated that nobody has to tell them what to write because they are going say the right thing. If they had started off at the Metro desk, or something, and had pursued the wrong kind of stories, they never would have made it to the positions where they can now say anything they like. The same is mostly true of university faculty in the more ideological disciplines. They have been through the socialization system.” (Chomsky 1997)

Ultimately, this “socialization system” leads to a journalism that no longer independently researches and critically reports on geopolitical conflicts (and some other topics), but seeks to consolidate the desired narrative through appropriate editorials, commentary, and interviews.

The next article fits right in:

The American Empire and its Media

The article is talking about the Establishment that governs us, the directing power that animates the American Empire--The Council On Foreign Relations, with its adjuncts the Trilateral Commission and the Bilderburg Group. This is a the driver behind the Deep State:

Largely unbeknownst to the general public, executives and top journalists of almost all major US media outlets have long been members of the influential Council on Foreign Relations (CFR).

Established in 1921 as a private, bipartisan organization to “awaken America to its worldwide responsibilities”, the CFR and its close to 5000 elite members for decades have shaped US foreign policy and public discourse about it. As a well-known Council member famously explained, they transformed the American republic into a global empire, albeit a “bene­volent” one.

Based on official membership rosters, the following illustration depicts for the first time the extensive media network of the CFR and its two major international affiliate organizations: the Bilderberg Group (mainly covering the US and Europe) and the Trilateral Commission (covering North America, Europe and East Asia), both established by Council leaders to foster elite cooperation at the global level.

To give you an idea of how this works:

... media personalities constitute only about five percent of the overall CFR network. As the following illustration shows, key members of the private Council on Foreign Relations have included:

Harvard economist and Kennedy supporter, John K. Galbraith, confirmed the Council’s influence: “Those of us who had worked for the Kennedy election were tolerated in the government for that reason and had a say, but foreign policy was still with the Council on Foreign Relations people.”

Princeton University professor and former CFR member Stephen F. Cohen described the Council as “America’s single most important non-governmental foreign-policy organization”, whose primary role is to “define the accepted, legitimate, orthodox parameters of discussion.” According to Cohen, “the CFR really is what the Soviets used to call the very top-level of the Nomenklatura.”

And no less than John J. McCloy, the longtime chairman of the Council and advisor to several US presidents, recalled about his time in Washington: “Whenever we needed a man we thumbed through the roll of the Council members and put through a call to New York [i.e., the CFR headquarters].”

Or consider this--and don't think Obama was some sort of exception to a mythical rule of presidential independence:

Following up on your conversations with John [Podesta] over the weekend, attached are two documents: —

We have longer lists, but these are candidates whose names have been recommended by a number of sources for senior level jobs in a potential Administration. — A list of women, similarly divided between candidates for Cabinet/Deputy and other senior level positions.

Please let us know if you have any questions.

The email provides concrete evidence that a big banker played a significant role in choosing key staff members of Obama’s administration. Citigroup, Goldman Sachs, and JP Morgan were among Obama’s top donors for his 2008 presidential election.

In other words, the best government money can buy. Can you imagine how angry, outraged, these people were about Trump?

In his famous article about “The American Establishment”, political columnist Richard H. Rovere noted: “The directors of the CFR make up a sort of Presidium for that part of the Establishment that guides our destiny as a nation. () [I]t rarely fails to get one of its members, or at least one of its allies, into the White House. In fact, it generally is able to see to it that both nominees are men acceptable to it.”

Finally, here's a plug for Dr. Malone's Liberty Forum address. It's two hours long, but it's all interesting. The first half is fairly technical stuff, but then he moves on to politics--and I think you'll see that it dovetails with all the above:

When Science is Silenced:

The Story of COVID Vaccines,

from the scientist behind the technology

One has to ask: Why?

Why would governments and governmental agencies purposefully ignore — and in many instances, ban — repurposed OTC drug therapies, while ramrodding at breakneck speed what some have called, at best, an "experimental drug?"

And in a country identified with the right to free speech, why would doctors, scientists and everyday citizens who are questioning public policy regarding the vaccine be likewise ignored, censored and — in many instances like Dr. Malone — banned?

As the leading scientist in cutting edge vaccine technology development and being at the forefront of public health responses over 30 years, Dr. Robert Malone, MD, MS is uniquely qualified to discuss the origins of these preferentially treated genetic vaccine platforms and current government implementation policies. Today, public policy, bioethics, traditional-, social- and other media censorship, academia, "Big Pharma," tech, and myriad sectors interact under unprecedented stress. Are the governmental responses we are witnessing — that reveal emergent threats to individual rights and good government — all part of the "Noble Lie?"