Well, first a brief political update--although, really, it's all politics. And in a very real sense it seems almost pointless. Election 2022 is pointing toward being one of the few most consequential elections in American history, but until that happens most of the real political news is at the grass roots level. As Emerald Robinson recounted recently (How The GOP Committed Suicide Trying to Stop Trump), once Mitch McConnell and the RNC conspired with state GOP organizations to install Zhou in the White House, the stage was set. We're seeing the results of Mitch's perfidy and the only real question is what happens when people get to register their views. The Federalist summarizes the current situation well, and the highly predictable future for the next year:

The administration is stumbling from one disaster to the next, with no end in sight and public opinion plummeting on nearly every major issue. ...

The corporate press, keenly aware that things are not going well for this White House, will soon back away from their critical tone on Afghanistan and resume their usual routine of running cover for Biden. In the coming days we’ll almost certainly see outlandish polls showing that, aside from Afghanistan, Biden is doing pretty well, actually, considering all the crises his young administration has had to face.

But don’t buy this line. Biden has not been overtaken by events, he is not a hapless victim of history or coincidence. Every problem his White House has encountered, it has made worse. Every crisis his administration has faced has been of its own making. And as bad as things have been thus far, they are going to get even worse.

There's plenty more at the link, if you need the reminder. Remarkably, the author leaves out the near collapse of NATO, under the pressure of the Zhou regime's fecklessness. But there are just so many disasters you can cover in one article.

However, turning to the booster stage of the Covid Regime, there has been an interesting development--or non-development. Zerohedge is reporting (without links)--and here are the relevant quotes excerpted:

"We think the ACIP could be leaning toward just a narrow 3rd dose recommendation for high-risk people (healthcare workers, elderly) vs the more blanket recommendation the White House favors."

"Both approaches are being considered, with pros and cons to both strategies,"  Associate Professor Lim Poh Lian, director of the High Level Isolation Unit at the National Center for Infectious Diseases, said.

"What might be good for older adults might have more side-effects in younger persons, so it may not be a one-size-fits-all recommendation. Those kinds of data just take time to be collected, analysed and reported," said Prof Lim, who is also a member of the Expert Committee on Covid-19 vaccination.

So, now they tell us--they want to collect, analyze, and report "data". They want to "look at safety issues". What a concept! But I thought all that was supposed to come before actually pushing injections on a panicked and unsuspecting public? Shows what I know about science--as it's become.

Perhaps the ACIP has been reading the recent study out of Israel. And maybe they've taken a look at comparative data, as in this graph: 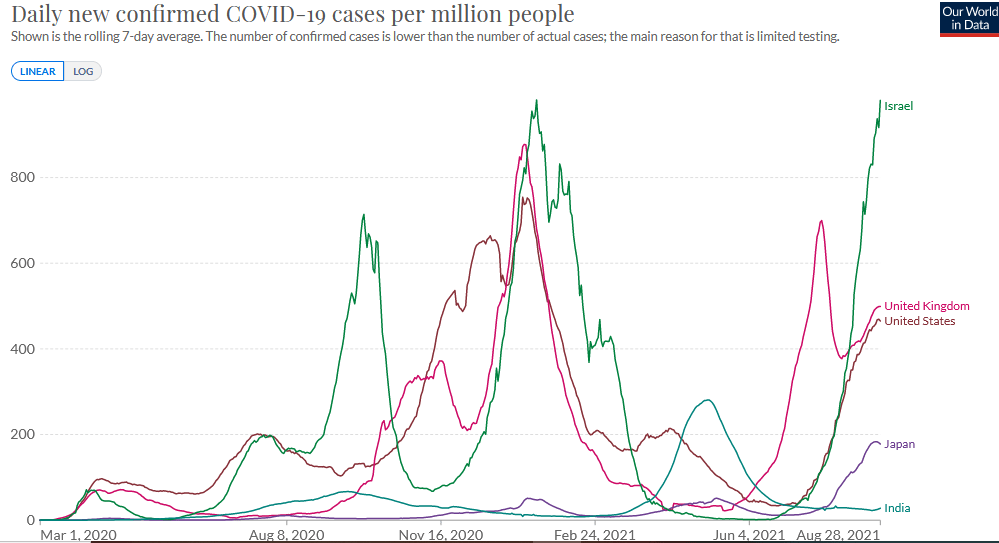 The key to understanding graph is to understand that India has a lowly 10% vax rate, but at the peak of its Dread Delta (formerly The Indian Variant) surge at the beginning of summer the Indian government distributed "copious amounts of Ivermectin". Poof! went the surge. Now, Ivermectin is currently undergoing clinical trials here in the US. In the meantime, highly vaxxed countries--Israel, the UK, the US--are experiencing their own surges, which appear to be disproportionately affecting those who were supposed to be protected--the "fully vaxxed." In addition, we are now getting official confirmation--well, perhaps "admission" would be the proper word--that, as the ACIP notes, there are some very real "safety issues". Unprecedented safety issues.

All of this would explain ACIP getting cold feet, despite heavy political pressure. They want to follow the science. Better late than never.

Karl Denninger, in a lengthy and information dense post this morning, points to some of the issues that ACIP is certainly aware of. We're all aware of the issue of side effects to these gene therapy medications, including the possible disparity between older and younger recipients. That's an obvious issue for ACIP to be considering--as Professor Lim says, "We have to look at safety issues and different segments of the population."

Another issue, of course, is ADE--Antibody Dependent Enhancement. This issue continues to be debated--are the current variants results of ADE, or are they simply products of the natural mutational process that all viruses undergo? What will the future bring? Part of the concern here has to do with whether the current gene therapy injections are effective against these variants--whatever their origin.

Another issue, which really gets to the heart of the push for a boost injection, is that we now know from the Israeli study that effectiveness of these injections simply wanes over a period of time that--in the world of vaccines--is quite brief: 5-6 months at best, even for those individuals who had a strong response to the original injection. The realization leads to the prospect of getting into a development race with the virus itself, which--given the rapidity of mutation in this virus--the virus is likely to win. Thus the renewed interest even in the medical establishment with "natural immunity", which is broader than the narrowly targeted gene therapies. I have no doubt that all this was well understood by the ACIP.

But there's a further issue that must be giving pause to the ACIP with regard to boosting. The risk involved with these injections may turn out to be cumulative rather than static. In other words, it could be--and there is some evidence of this already--that the more injections you receive the greater your risk of side effects becomes. If the pathogenic spike protein remains in your body, then additional boost injections will increase the amount of accumulated spike protein, thus increasing your risk. The ACIP is certainly concerned about this possibility. It's one thing for an 85 year old to accept such a risk, but what about "different segments of the population"? Young adults? Children?So, with that here are some brief excerpts from KD's post--do yourself a favor and read the original:

There's An Off Ramp - But It Has A Price

But, as Israel has now shown with conclusive data, antibody titers from vaccination wane at 40% a month while those from infection decrease at a much slower rate and in fact broaden in terms of recognition to the virus over time.

The broadening is indicative of B-cell recall, which is utterly crucial for lasting immunity.  Antibodies do not circulate forever in the blood and other tissues; they eventually degrade and are replaced -- if your body's immune system has been trained.  Your B-cells are largely responsible for this, along with T-cells and a whole cadre of other components of the immune system.  This is why monoclonal antibody infusions protect you right now, when infected, but do not provide lasting immunity on their own.  The infection itself does, but not the infusion.  If you give the infusion to a non-infected person you wasted it; they have protection for a short period of time but it goes away.

The evidence from these now-published decay rates is that B-cell training does not happen with any of these vaccines.  ...

You can bet the vaccine makers will all do everything in their power to evade disclosure of what they knew and when in this regard because if in fact they knew that B-cell induction did not happen and deliberately set dosing to produce a result intended to game the EUA process that is quite-arguably intentional misconduct which is the bar that must be cleared to void their legal immunity for all of the adverse events PLUS all those who got infected as the defectively-produced immunity waned.

Consider a 40% per month decay rate for these injections and a natural infection that produces a titer of "100" (units don't matter for this purpose, nor does the actual number -- just the ratio.)

If the jab produces an original titer of 1,000 (10x as much) you get the following titer level on a monthly basis for the jabs:

At six months you're probably below the protection threshold.  Note that it takes 12 months, starting from 100 with a 5% monthly decay for natural infection, to reach the same titer.

So why does the titer decay so much slower if you get infected?  Simple: It doesn't actually go away; natural infection trains your B-cells which is a durable response and thus capable of immediately restoring protection if you get challenged with the virus again, which you will.  This is why the Cleveland Clinic, following their employees who got infected, found zero re-infections over more than a year's time among more than 1,000 infected and recovered individuals.  It is also why a recent study found that natural infection and recovery was 13x as protective as the jabs.

This is how every other virus works and with natural infection by this virus most of the titer is to the "N" protein which cannot mutate materially and still be a virus capable of infecting and replicating in humans.  The vaccines do not include any part of the "N" protein and thus cannot produce a response to it.  In other words all of the "escape" and even "enhancement" concerns with the vaccines don't happen if you get naturally infected and beat the bug.

This is, incidentally, why humans and all other animals exist on this rock; our immune system has evolved over millennia to prefer targeting future protection, post-infection and recovery, toward the parts of a virus that don't change very much if at all.  In addition that recall capacity frequently migrates into the marrow where it becomes decades-long if not permanent and we already know that happens with Covid-19 because a small study was done that proved it.  These parts of the immune system and actions by it confer a survival advantage and thus were naturally selected for over the space of hundreds of thousands or even millions of years.  Disbelieving that which is the very reason you survived your first few months after being born, and why humans and all other animals exist, is flat-out stupid.

The vaccines, it appears, fail to produce this B-cell response; that is a very reasonable explanation for why their antibody titers decay so fast.  The manufacturers may have known this, which if true explains why they set the dosing where they did.  Had they set dosing to produce a titer equivalent to natural infection within three months protection, by the Israel data, would have all but disappeared and the EUA-generating trials would have failed as there would have been no statistical difference in infection rates between those who got the actual shot and placebo by the end of the trial.