America's Shame--But Is There Hope?

We rightly criticize and condemn China for sending more than one million Uighurs – Muslims – to “re-education” camps. At the “camps” the Uighurs are “educated” in a process their Chinese elders describe as “washing brains, cleansing hearts, strengthening righteousness and eliminating evil.”

Again, this is sick and wrong, a human rights abuse, something that should disgust us all.

But we have our own ... “re-education” camps that indoctrinate, all for a supposed good, evolved cause. We call our re-education camps public schools.

It seems particularly "sick and wrong" that Americans do this to their children and young people, in multiple ways, and devote vast sums of money to the process. This is America's great shame. Choslovsky provides an example of this sickness, from the Evanston, IL, (home to Northwestern University) government schools:

Here is one example, from Evanston, right outside of Chicago, of what first and second graders are now “taught” in school:  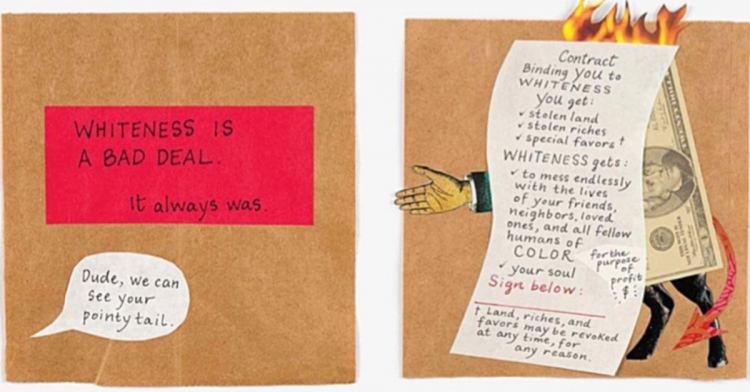 DEEMAR V. BOARD OF EDUCATION OF THE CITY OF EVANSTON/SKOKIE

This is not a one-off or a rogue teacher. This is the curriculum, endorsed by the superintendent and school board.

This is pure, unadulterated hate. You have to ask yourself, What could be behind the mentality that would pay to have children indoctrinated into a cult of hate based on skin color? Choslovsky suggests that woke parents--who are most likely to be active in the school community--have bought into the progressive delusion of the perfectibility of mankind through education. It's an idea as old, and as deluded, as Plato--it's been tried numerous times in history, always with tragic consequences. In America this delusion dates back to the Progressive Era beginning in the late 19th century.

But check out to what degradation this supposedly advanced concept has led in Evanston--and many, many other communities:

Likewise, teachers are forced to acknowledge that “white identity is inherently racist.” They are actually separated by race during training. And if teachers object or question the practice, the district brands them “racists.”

Students are also separated at times by race. During “Black Lives Matter Week,” the science department is required to teach a lesson called, “Black Women and Unapologetically Black.” Fifth grade teachers are even required to indoctrinate – I mean “teach” – that “color blindness helps racism.”

Teachers are instructed “to disrupt the Western nuclear family dynamic as the proper way to have a family” and instead to promote the “Black Village,” which is a “collective village that takes care of each other.”

Anecdotally--and regarding the concept of the "collective village" "taking care of each other"--I recently saw a white female MSM reporter asking an African American woman whether she favored a stronger police presence in response to the out of control crime that is now common to most black inner city neighborhoods (this was Chicago). The woman replied that, no, more police were not needed because the "community" could deal with the situation themselves.

Again, this is the curriculum for teaching seven year olds. It covers more than 7,000 kindergarteners through eighth graders attending 15 schools.

Amidst all of this, sadly fewer than half of the district’s students meet or exceed the state’s math and English standards. And in the name of “equity,” the district recently eliminated geometry for its advanced students.

"Advanced" students not taking geometry? This disconnect with reality is what attempts at Utopian societies always devolve into.

There's lots more about this travesty of education, but the somewhat good news that offers a bit of hope is that one teacher has stepped up to challenge the madness:

If you think this is wrong, there are two things to do, one political and one legal. On the political front, you can use the ballot box and elect school board members who reject such practices.

People are finally realizing that what actually affects their daily lives more is not who sits in the oval office in Washington, but the nameless folks who set policy for the schools down the street, where their kids spend more of their waking hours than at home.

This I do have to take issue with, and it should be surprising that such stupidity is coming from a Harvard educated lawyer. The notion that local matters can be separated from national politics, and especially from the "Oval Office" that plays such a large role in appointing judges is a non-starter. Anyone who thinks local life can be lived without reference to what Congress, the Executive Branch, DoJ, DoE, Immigration agencies, and the Judicial Branch say needs to wake up and smell the coffee. The reality is that this Harvard lawyer is most likely a political liberal who for personal reasons is concerned about anti-white racism, but doesn't want readers to get the idea that to combat this madness you need to reexamine your broader politics. Sorry--you do need to conduct that reexamination. Liberalism is a package deal, to a far greater degree than conservatism in practice is. To walk the liberal walk inevitably involves lockstep.

And if that fails, people can, and should, consider filing lawsuits. To be sure, it takes courage. Stacy Deemar, a 20 year veteran teacher in Evanston, recently did so.

Like the plaintiffs in Brown v. Board of Education, Deemar is stepping up and saying the Evanston practices violate our Constitution’s requirement of “equal protection” under the law and must stop. Her 34 page complaint boils down to one sentence: “District 65 continues to treat individuals differently based on their race.”

This is one example, but we are seeing what appears to be a real grass roots uprising across the county against CRT. Several liberal outcasts have been chronicling this movement, which is also visible in the turn to home schooling as well as to private schools that retain some measure of sanity. And it's not just CRT that is attracting this grass roots concern. Poll after poll are also showing that percentages as high as 75% of people are upset over crime, immigration, and border control. Gun sales remain at record levels--which is a proxy for concern over safety and an indication that people are looking for a practical step they can take, rather than simply complaining. They're spending significant amounts of money and often breaking the mold of their lives to express, in this way, their alienation from what's happening to America.

In a somewhat off beat way, the Prog mentality that has given rise to these aberrational Prog movements that control so much of our lives is also reflected in a comment that Steve Hayward made yesterday toward the very end of his podcast with Kevin Roche. It's something that I've also always suspected is behind the Covid Panic--that Boomers have, for whatever reasons--failed to come to terms with their own mortality. Perhaps, having abandoned belief in an afterlife, they now cling, perhaps even subconsciously, to an irrational hope that by extreme health activism--diet, cycling, etc.--they can somehow live forever. Roche gets into this theme by pointing out how relatively harmless Covid the disease actually is, in the big picture. Then he pivots:

Roche: Hey, none of us are gonna live forever. We can't all be hermits. And now I am hearing among my friends even, who originally were happy to just lock themselves in their houses, I'm hearing more people saying, I'm not doing this anymore--I have to live my life.

It's a small step, perhaps, but a real step back toward the real world. It all counts. And in a holistic way it fits in with the other reality based, grass roots, concerns and activism that we're starting to see. It's all pushback against the State--Big Brother.

We may also be seeing something of this pushback in California's recall election. Recent polling has shown movement against Newsom. That movement is coming especially from Hispanic voters who have traditionally voted Dem. In some ways, I suspect--and hope--that this election will turn into a referendum on the state of the state of California, as well as of the country. Extreme Covid Regime policies, extreme immigration, voting, Prog ideology in the schools, extreme environmentalism--is it creating a perfect political storm of sorts in California?

Monica Showalter discusses some of the recent polling in California this morning. Showalter first quotes from the Daily Caller--and the news is bad enough on its face:

More than half of Hispanics in California say they would vote to recall Democratic Gov. Gavin Newsom, according to an Inside California Politics/Emerson College poll published Tuesday.

The poll of 1,000 registered voters, with a margin of error of plus or minus 3%, showed Californians are split on the issue with 46% in favor of recalling Newsom and 48% are against it. Among Hispanics, 54% said they would vote to recall.

Showalter then goes on to cite multiple sources who point out possible problems with the poll. The major problem is that, while it's true that Hispanic turnout typically trails that of other demographics, the under sample in the poll may have been extreme:

The Globe spoke with Mark Meuser and compared notes on the latest poll and the data.

“First, looking at the data, we see that the hispanic community is 54.4% planning on voting for the recall,” Meuser said. The state of California has approximately 35% registered Hispanic voters. But this poll only made up of 24.2% hispanic voters, Meuser noted. “It appears that this Emerson poll has under sampled hispanic voters.

That's a huge under sample, so the question is: Is it justified by turnout models? Also, is there anything different about this election that could affect Hispanic turnout, in an upward direction?

We can't know for sure at this point, but it's well known that Newsom's repressive Covid Regime had a very disproportionate effect on Hispanics. Again, this is something that may play into the increasing unrest we're seeing, as reflected in polling that shows high voter alienation from the regime.

The other wildcard is the Republican party. Right now they're hewing to an anti-Trump, play it safe, establishment line. There appears to be a growing sentiment of restlessness in the country, that things can't continue like this. A lot can happen between now and November, 2022. For Republicans to imagine they can back into a do-nothing majority could well be a recipe for disaster.