Is China Jiggering It's Census Numbers? And Why?

SinoInsider--a site that is connected to Falun Gong--has published a very interesting (and lengthy) study of the latest PRC census numbers. As with all other matters statistical involving the PRC, census stats are subject to ... fine tuning by the authorities. For various reasons.

The authors of this study

cover a number of reasons behind what they believe are jiggered population statistics, but as you can clearly see their main contention is that the jiggering is primarily intended to cover up the extent of Covid related deaths in China.

For reference, China claims that the total Covid deaths amount to 4,636, as of May 12, 2021. A priori, that does seem difficult to accept. After all, China remains a country not only with an enormous overall population--somewhere in the neighborhood of 1.4 billion--but also a country whose population is older than average and where multiple generations live in crowded conditions. One would expect that older people and those most at risk would have suffered greatly, and that that would be reflected in very high mortality figures. Anything other than that result would logically attract inquiry and require some explanation.

The conclusion of the study is rather sensational. The authors believe that Covid deaths in China over the past year could exceed "8 digits". "Could exceed 8 digits" means that Covid mortality could be greater than 10,000,000. That's a lot of people. It's obviously also not a result that China would be proud of or would consider as reflecting well on the PRC--in other words, it would be a statistic that the authorities would regard as ripe for fine tuning or ... jiggering.

If the authors of this study are even remotely on to something, this is a very big story.

In the nature of all things China, this conclusion must be speculative, relying on "indirect indicators," but that doesn't mean it isn't supported by some measure of solid evidence. As I said, the article is detailed and lengthy, but I'll present below the concluding portions of the argument.

The premise that comes before these excerpts is that the PRC wanted to present a profile of normality in its census, which would entail some growth in the total population. The PRC authorities are aware that China's population will begin to decrease in the future, but that downward turn is not supposed to happen just yet (despite signs that it has). Thus:

3. The CCP may have “succeeded” in producing “population growth” in its Seventh National Population Census to preserve its “great, glorious, correct” image, but its manipulation of the final outcome leaves other troubling data discrepancies:

a) Unusual birth and death rates 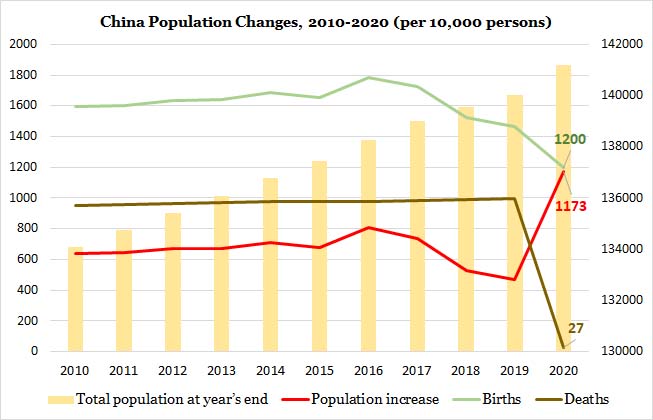 Table 1 shows how abnormal the 2020 population growth and death figures are when compared with figures over the past decade. The 2020 figures are even more suspect in considering the COVID pandemic that year and unusually low official coronavirus death numbers. 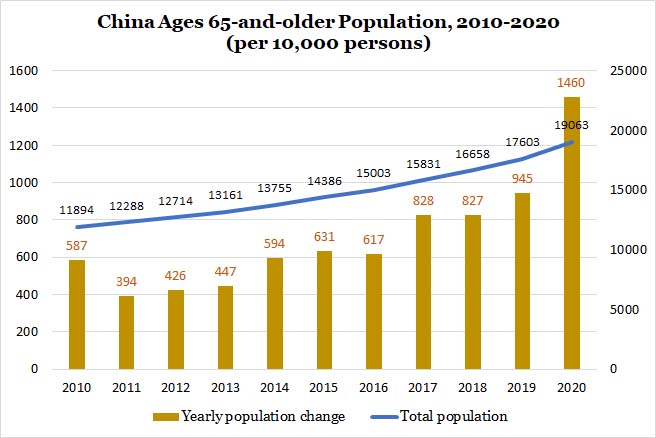 As seen from Table 2, the sharp spike in the ages 65-and-older population in 2020 is very suspicious, especially when compared with growth rates in the three years before. As we noted earlier, those born in 1955 are old enough to be mortally challenged by terrible political campaigns, natural and man-made disasters, and epidemics. Birth rates in 1955 are also the lowest on record between the years 1952 (corresponding to 2017) to 1955 (corresponding to 2020). So it is inconceivable that more than 5 million people joined the ages 65-and-older population in 2020 as compared to each of the previous three years. The 2020 spike also indicates that few people in the 65-and-older bracket died that year, which is hard to fathom when the elderly are particularly vulnerable to COVID-19.

4. A key reason why the CCP had to delay its census release could be that the regime had to find ways to paper over an apparent discrepancy between the actual number of COVID-19 victims and the extremely tiny official tally of COVID deaths (4,636 people nationwide, including 4,512 in Hubei Province, the epicenter of the pandemic, as of May 12). 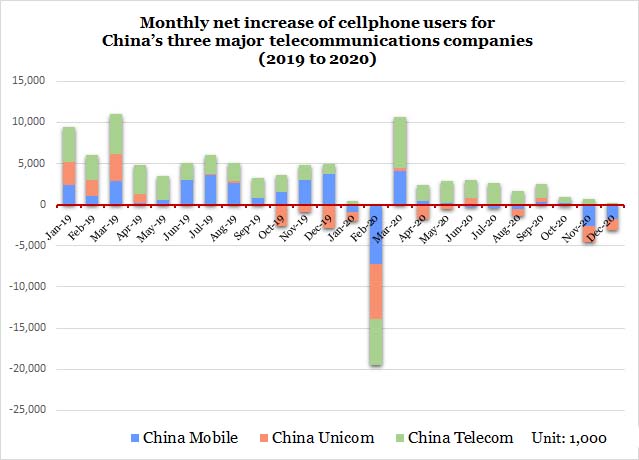 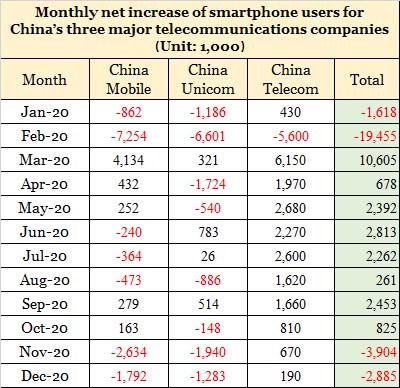 We previously looked at how the CCP sought to cover up the COVID epidemic in China and how indirect indicators offer clues about the actual scale of coronavirus deaths (see here, here, here, and here). The sudden plunge in cell phone users on the mainland in January and February 2020 (down 21.073 million), as well as in November and December 2020 (down 6.789 million), are very suspicious, and it is reasonable to infer that the phenomenon is related to COVID deaths.

From Table 4, we can see a sharp drop in cellphone users in January and February 2020, followed by an increase of 10.605 million users in March. Some have argued that the January-February plunge is related to people with multiple phone lines canceling some to save costs. However, the argument is not entirely valid seeing how the CCP said it had “basically controlled” the epidemic at the end of February and was starting to ease people back into work. People with many phone lines are also unlikely to drop some with lockdowns lasting for a little over a month in some cities. Indeed, the spike in cellphone users in March reflects the relaxation of lockdown measures and people needing a cellphone to comply with health code requirements for work, travel, and school. Meanwhile, the sudden drop in cellphone users in November and December 2020 coincided with cities entering “wartime conditions” and areas classified as “high-risk.” 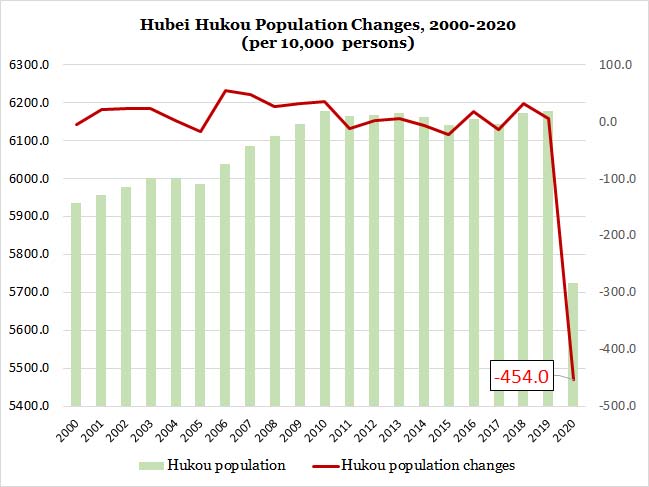 From Table 5, we can see that hukou registrations in Hubei plunged by 4.54 million in 2020. In contrast, Hubei’s hukou registrations stayed in the 61.38 million to 61.78 million range (fluctuation of less than 400,000) in the previous nine years (2011 to 2019). Hubei’s official figures suggest that the province’s population (births, deaths, migration, etc.) remained steady until last year when the epidemic broke out in Wuhan. The plunge in Hubei hukou registrations translates into hukou cancellations in the millions in 2020; hukou cancellations are the result of domestic and international migration, or death. While Wuhan typically sees greater migration as the city is a transportation and industrial hub, migration is an unlikely reason for mass hukou cancellations due to COVID lockdowns and other restrictions affecting domestic migration.

From the various data presented above, we have reason to believe that actual COVID deaths in China far exceed the official figure of 4,636; deaths caused by or related to complications of COVID-19 in 2020 could potentially be in the eight-digit range. Also, given our pandemic death estimate and in accounting for CCP’s data manipulation, we believe that China’s population currently stands at less than 1.4 billion.