UPDATED: Is Cuomo Hoarding Hydroxychloroquine? And Why?

Maybe "hoarding" is the wrong word, but I'm not sure what the right word would be for the stupid thing that he's doing. From Sean Hannity's op-ed Gov. Cuomo, stop denying New Yorkers hydroxychloroquine:

Enough is enough. New York Gov. Andrew Cuomo needs to IMMEDIATELY lift his pharmacy ban that is forcing New Yorkers stricken by the coronavirus into an already overburdened hospital system to get the potentially life-saving drug hydroxychloroquine.

Because of an executive order issued by the Democratic governor, any new prescriptions for hydroxychloroquine must go through the already overrun hospital system. This makes no sense.

I live on Long Island and many doctors are telling me that they want to prescribe this medication to their patients who test positive for COVID-19 – the disease caused by the coronavirus – but do NOT need the patient to come to a hospital. However, Cuomo’s executive order forbids pharmacies from filling the prescriptions.

The governor is creating a much bigger crisis in his state’s hospital system by denying New Yorkers THE CHOICE (in consultation with their doctors) to take this potentially life-saving medication.


Hasn't Cuomo heard the news? There's a pandemic making the rounds, and this pandemic thinks it can make it in New York. It's putting on a pretty convincing performance there.

Forcing all positive testers to show up at a hospital for the only readily available specific medication--when they could be getting it through a pharmacy--is a recipe for disaster. A recipe for a total breakdown of the hospital system, as anywhere up to 15% of those positive testers may end up being brought to the hospital later in serious condition. That could be avoided with Chloroquine+ therapy at home.

Trump has been doing the presidential thing, supporting the governors. It's how our constitutional order is supposed to work. But in a crisis the president can invoke more authority. Maybe it's time he did so with regard to Chloroquine+ therapy.


Ray-SoCal gave me a link to a blog that led to another link to an ER doc in New Orleans' blog. I want to quote some of that blog as a reminder about NUMBERS--their inexorability. Also, for anyone who thinks getting people on ventilators will solve problems. Chloroquine+ has the potential to be a game changer, but more ventilators for sure is not:

We have more than that; you know it, I know it, Yellow Dog knows it. But that means, minimum, this is doubling every three days, and has done so six times in the last nineteen days.

That's eight million cases by the 19th of April, give or take.

And spotting this the low end of only a 1% CFR [Case Fatality Rate], that's 80,000 dead in two more weeks, which surpasses any flu season, and is 4 times worse than the average one.

In perspective, it's nearly a year's worth of U.S. combat deaths from WWII, in just 2 more weeks, if it rolls out that way. It may be better or worse, but it's sure as hell not anywhere close to good yet.

So, can we please finally STFU about how this is "just the flu", and how "the cure is worse than the disease", when opening the floodgates takes the spread of this to Mars, on a rocket ship?

It's doubling every three days now, not just because of testing, but because it can, and this is with most of the country on at least voluntary stay-at-home, to restrain the spread (which is working, when dumbasses actually do it).

You can think happy thoughts when cases and deaths (over 1100 since yesterday) peak, and come down the other side of the roller coaster. Not before.

And if somebody, anybody, thinks we're good if we just crank out 100,000 or 1,000,000 ventilators, because "'Murica!", then please, tell me how you plan to [crank] out the 25,000 to 250,000 trained respiratory therapists you'll need to run that many vents, which you don't have now just sitting around playing cards and waiting to come to your Pandemic Party in ICU or the ER.

And BTW, ... Kung Flu patients on ventilators die at rates between 70% (Seattle) and 86% (worldwide average), to date.

So anyone bad enough off to need to go on a ventilator with this (which means they're also sedated, and in ICU, as either a 1:1 - one nurse:one patient - or 1:2 patient), has between 1 chance in 3, and 1 chance in 7, of surviving to recover and go home. The other 2 out of 3 or 6 out of 7 will simply die, between Day 11 and Day 21 of intubation. Sometimes, even quicker. (Our patient last week lasted 48 whole hours, and coded multiple times before the MDs called it off for good.)

Somewhere between 97 and 99% of you will probably recover just fine. But 1-3% of you, and not all of them "old" by any standard, are going to die in a coma, isolated, with a plastic tube down your throat, and breathing mucus while you drown in your own body fluids.


So here are a few things to do while you digest that:

Remind yourself that this--and all the medical related shortages that we're experiencing--came to us courtesy of the globalists who became rich off sending our jobs and our manufacturing base to China--and will now get bailed out for the umpteenth time.

And of course don't forget that this came to us courtesy of the Chicoms--with whom our wealthy globalists played footsie for the last several decades. It's the price of cheap big screen TVs and such.

And then, read this blog by the ER doc in New Orleans: Clinical Pearls Covid 19 for ER practitioners. Just to be clear on what we're talking about coming to a hospital near you.

Please refer to Worldometer. Nothing complicated, simply the total deaths in the US by day: 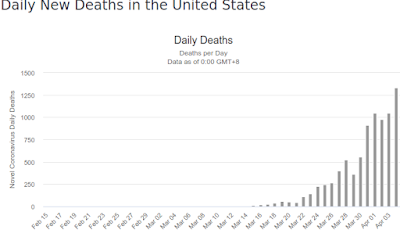 That graph should be concerning. I understand that those who don't believe in modeling apparently believe those numbers--represented by lines on the graph--are simply random. I regard that view as wrong and frankly reckless.

Do I think the Deep State, and CDC is a bought and paid for tool of the DS, would gin up a method of counting the dead that would tend to confirm their response to the pandemic?

Does the pope wear red shoes?


To which I reply: That depends on who you think the pope is--or whether you think the See of Rome is vacant. If you think the guy who wears white and lives in a hotel in Vatican City is the pope, then the answer is: No. He wears black shoes.