ABC News is running with an important story that provides detail on the US Intel Community's (IC) early knowledge of the Wuhan Virus' potential for catastrophic impact on the world--or, at a minimum, on US miltary forces in Asia: Intelligence report warned of coronavirus crisis as early as November. Obviously this story--and it is obvious, if you read the whole thing--is trying to pin the blame for what's happening currently in the US on Trump. So, before I provide some excerpts from ABC, I'll lead with the intro to Zerohedge's coverage--US Intelligence Warned Of "Cataclysmic" Coronavirus Crisis As Impeachment Dominated Headlines:

While Congressional Democrats dominated headlines with their impeachment of President Trump - who was ultimately acquitted by the Senate, US intelligence officials were sounding the alarm that a serious illness was sweeping through China's Wuhan region.


The idea of the ABC reporting seems to be that a president who is being impeached shouldn't miss a beat in anticipating potential--not actual--disease threats. And the perpetrators of what was clearly a constitutionally fraudulent impeachment--indeed, an Impeachment Theater event--should bear no responsibility. In my view that will be a losing narrative, just as the Russia Hoax was. OTOH, it will require skill and determination to turn it aside.

Beyond that, however, another bit of context may be helpful. Apparently the CDC is saying that they were basically misled by the Chicoms and by the WHO. They thought that what was happening in China was another SARS-Classic event that, while serious, could be contained. While wrong, that was not a totally misguided assessment, given the history of past SARS outbreaks in China, from 2003 on. Thus they remained focused on the developing flu season. What CDC didn't yet realize was that SARS-CoV-2 was, in epidemiological terms, a decisive development over SARS-Classic that gave the new virus much greater potential for a pandemic breakout. The thinking at CDC reflected informed epidemiological thinking as found in Michael Osterholm's 2017 book, which classified SARS as a regional epidemic threat but new flu strains as potential pandemic threats--potential global threats.

Thus, Trump--besides being greatly occupied with all the resistance shenanigans and the Impeachment Theater throughout the months of the Covid19 buildup and breakout--from November, 2019, to the end of January, 2020--would have been receiving conflicting accounts of the novel virus: those from the IC and those from the CDC.

All that said, there is definite material of interest in ABC's reporting, mostly IMO with regard to what it tells us about China. Here are the opening paragraph's from ABC, which cover the essential details:


As far back as late November, U.S. intelligence officials were warning that a contagion was sweeping through China’s Wuhan region, changing the patterns of life and business and posing a threat to the population, according to four sources briefed on the secret reporting.

Concerns about what is now known to be the novel coronavirus pandemic were detailed in a November intelligence report by the military's National Center for Medical Intelligence (NCMI), according to two officials familiar with the document’s contents.

The report was the result of analysis of wire and computer intercepts, coupled with satellite images. It raised alarms because an out-of-control disease would pose a serious threat to U.S. forces in Asia -- forces that depend on the NCMI’s work. And it paints a picture of an American government that could have ramped up mitigation and containment efforts far earlier to prepare for a crisis poised to come home.

"Analysts concluded it could be a cataclysmic event," one of the sources said of the NCMI’s report. "It was then briefed multiple times to" the Defense Intelligence Agency, the Pentagon’s Joint Staff and the White House.

From that warning in November, the sources described repeated briefings through December for policy-makers and decision-makers across the federal government as well as the National Security Council at the White House. All of that culminated with a detailed explanation of the problem that appeared in the President’s Daily Brief of intelligence matters in early January, the sources said. For something to have appeared in the PDB, it would have had to go through weeks of vetting and analysis, according to people who have worked on presidential briefings in both Republican and Democratic administrations.

The NCMI report was made available widely to people authorized to access intelligence community alerts. Following the report’s release, other intelligence community bulletins began circulating through confidential channels across the government around Thanksgiving, the sources said. Those analyses said China’s leadership knew the epidemic was out of control even as it kept such crucial information from foreign governments and public health agencies.


My first question is this: The report speaks of "repeated briefings" in the Executive Branch, but I'd like to know whether anyone in Congress was ever briefed. Surely the intel committees get briefed on important intelligence findings? Obviously I don't know for sure, but I'd very much like to know if Congress was ever briefed. After all, we know Congress was being briefed on just about everything else that was going on--or was claimed to be going on--in the Trump administration.

The second matter that arises from this has to do with China and the Covid19 breakout.

Look at the words that are used to describe the intel reporting:

"a contagion was sweeping through China’s Wuhan region"

"it could be a cataclysmic event"

"China’s leadership knew the epidemic was out of control"


It's not news that China's leadership deceived the world about this pandemic. But it's also not news what has happened everywhere this virus has been let loose without countermeasures: It sweeps through regions, it's a catclysmic event, it spreads out of control. And it kills tens of thousands of people.

To me, if this was happening in China beginning in November--and given what we have now experienced regarding the rapidity with which the virus can spread--there would have been no possible way for China to have prevented many tens of thousands of deaths from the virus--if, as is fact, they adopted a strict quarantine only on January 22, 2020. The timeline of 2 months is just too long, especially given living conditions within the affected areas of China and the amount of New Year travel taking place.

I remain persuaded that, even if preparation and action at an earlier date in the US would have been highly to be desired, our response came at an earlier point than did the Chinese government's response. However, the knowledge that the true extent of deaths in China may well exceed 40K--and, really, the numbers could run far higher--should temper our approach to policy here in the US.

UPDATE 1: Jim Geraghty has a very good article covering much of the background to this post. We've alluded to much of it already--including the fact that the US was engaging in the same research as were the Chinese at Wuhan, as well as the debates over the advisability of it. Geraghty's articles provides a lot of useful background: Did We See This Coming?

UPDATE 2: Kristina Wong, correspondent for Breitbart, has tweeted a statement from Colonel Dr. R. Shane Day, the director of the NCMI, denying that such a report exists. Here's the account of that at CNN:

NCMI denied the existence of the report later Wednesday, saying that "no such NCMI product exists."

"As a matter of practice the National Center for Medical Intelligence does not comment publicly on specific intelligence matters," said Colonel Dr. R. Shane Day, the director of the NCMI, in a statement.

"However, in the interest of transparency during this current public health crisis, we can confirm that media reporting about the existence/release of a National Center for Medical Intelligence Coronavirus-related product/assessment in November of 2019 is not correct. No such NCMI product exists," Day added. 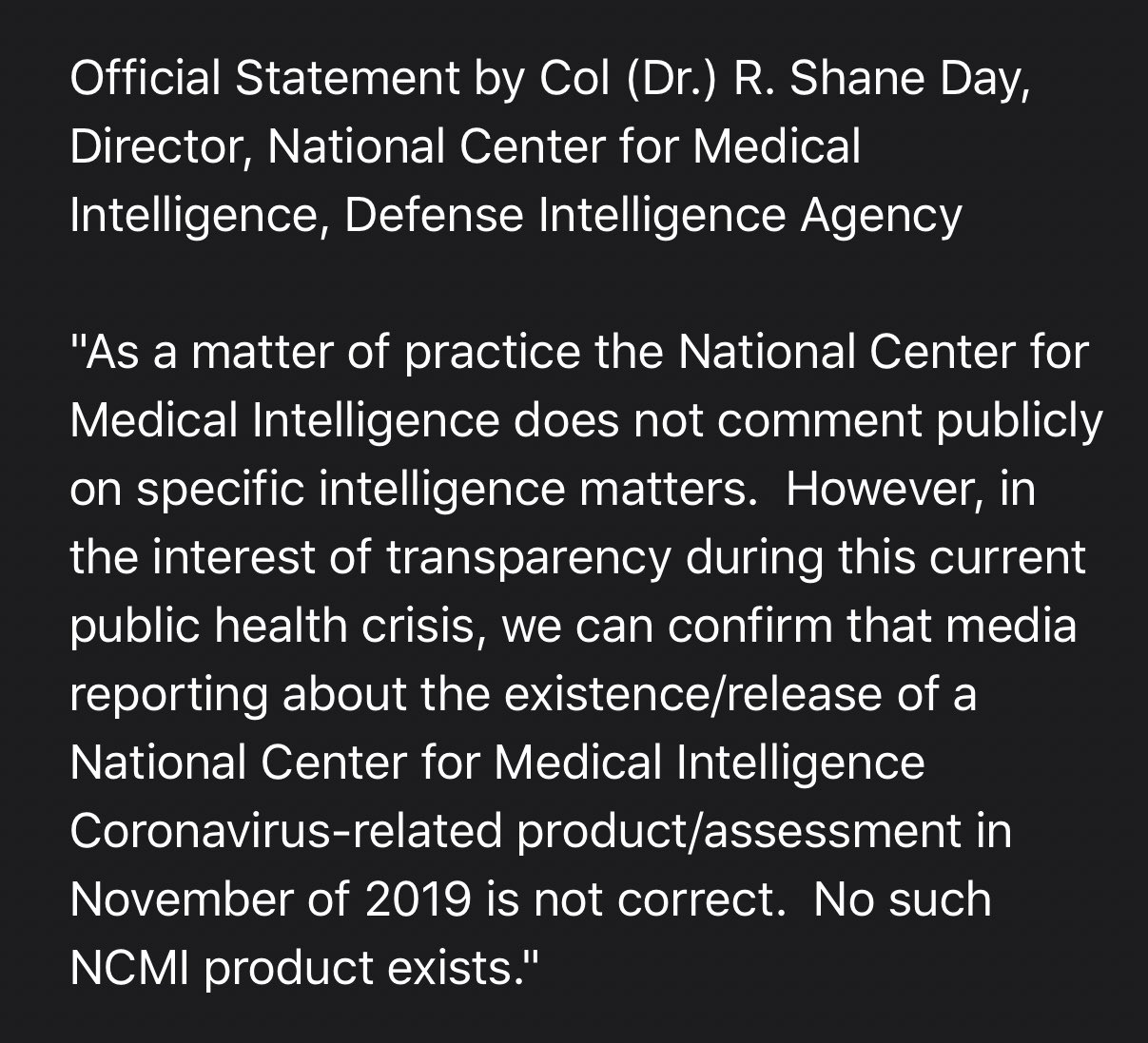