Over at Fr. Z's blog we learn of an important point of canon law. Bishops--local ordinaries as they're termed--retain, even under a dictatorial Vatican occupant, considerable authority in disciplinary matters. And control over liturgical matters is disciplinary. That means that no bishop actually has to follow this directive:

Look… the bottom line is this.  There is sloppy language in this document that, frankly, if carefully read with the interpretive principle odiosa restringi et favores convenit ampliari, there isn’t that much that would have to change in a diocese – depending on the bishop. Sure the document is dreadful: it can be read in a severely restrictive way or be read in a lenient way. Just as that dreadful footnote in Amoris could be read one way or the other.

I would add to the above the provision of can. 87 –

Can. 87 §1. A diocesan bishop, whenever he judges that it contributes to their spiritual good, is able to dispense the faithful from universal and particular disciplinary laws issued for his territory or his subjects by the supreme authority of the Church. He is not able to dispense, however, from procedural or penal laws nor from those whose dispensation is specially reserved to the Apostolic See or some other authority.

So, a diocesan bishop can dispense from disciplinary laws, both universal laws and those particular laws made by the supreme ecclesiastical authority (read: Supreme Pontiff) for his territory and his subjects.  Since the provision that the Traditional Roman Rite ought not be celebrated in parish churches (cf. Traditionis Art. 3) is a disciplinary law, and has not been reserved to the Apostolic See, the diocesan bishop is free to dispense from that norm!

Fr. Z goes on to note toward the end of his post that already a number of American bishops have issued statements suggesting, in effect or even point blank, that nothing is going to change. Not in their dioceses. It's almost as if they were lining up to issue their statements.

The explanation may be found in the most recent post of a noted Italian Vatican watcher, Sandro Magister:

Conclave in View, Everyone Backing Away From Francis

Movers and shakers in the V2 are convinced, says Magister, that a conclave is going to happen sooner rather than later. It seems that a large swath of that world cordially detests Bergoglio. We're not talking about raging idealists here--they're simply fed up with his dictatorial ways and noxious personality, with the hangers on that surround him. They also want their own shot at power and influence. Really! 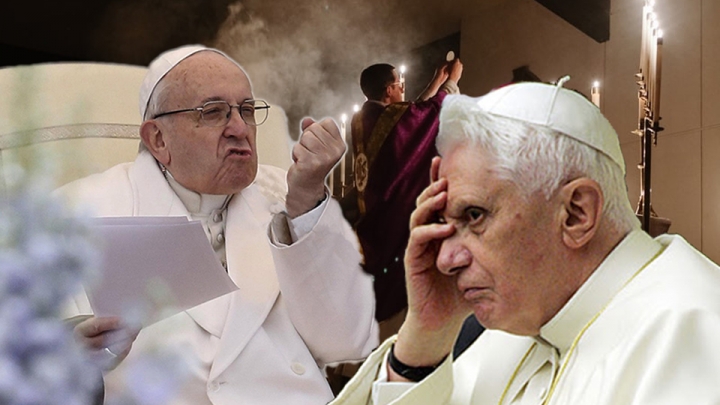 As a result, having raised their fingers to the prevailing breezes, even the far Left wing of the V2--which is pretty far Left--have figured out that their chances of planting their backsides in the chair of Peter, or influencing the selection, may depend on distancing themselves from all things Bergoglio.

How far that distancing could go is suggested by a recent article in a French liturgical magazine, Paix liturgique. The article was written toward the end of June, and dealt with the rumors of an abrogation of the traditional Roman-Gregorian liturgy:

I translated the article for family, and the really relevant portion is this paragraph:

Andrea Riccardi, main character of the Community of Sant'Egidio, who is the complete opposite of a conservative, in a recent book, where he considers the fire of Notre-Dame de Paris as a parable, deals with the announced social disappearance of the Church: La Chiesa brucia. Crisis e futuro del cristianesimo (Tempi nuovi, 2021), The Church is on fire. Crisis and future of Christianity. He analyzes, country by country, in Europe, the collapse of Catholicism. In the conclusion, of course, he expresses an obligatory hope on the theme "crisis is not decline", but he had already let fly many telling one liners: "many Catholics have gone from enthusiasm for Bergoglio to disillusion", "the solution will not come from reform". And then also this observation: "Traditionalism is a reality of some importance in the Church, both organizationally and in terms of resources" [lit. "in the organization as well as in the means"].

In other words, even the enemies of tradition--at least the more realistic among them--recognize that tradition cannot be simply kicked to the side of the road, as Bergoglio and his henchman have attempted to do. That reality may be exactly what some American bishops--who have undoubtedly had time to consider their response--are taking into account. In the post Bergoglio era to get ahead may require a degree of ideological flexibility, a coming to terms with a reality that has "some importance ... both organizationally and in terms of resources."

Let's face it--most bishops have plenty of problems and headaches without adding a pissing contest with the least troublesome and most generous portion of their flock. Many who are not committed ideologues may calculate: this guy is a short timer, so why should I cause myself more trouble than I need to? Those with ambitions may also recognize that a display of flexibility is in their self interest. Thus, Peter Kwaśniewski writes (Traditionis Custodes: The New Atom Bomb):

I believe at least some bishops will be non-plussed by how cold, harsh, and foolish is Francis’s anti-TLM motu proprio, which has all the charm of a decree by Stalin ordering the purge of Ukrainian dissidents. Of course, there are others who will run with it, but I can’t imagine that bishops who have seen the many good fruits of Summorum Pontificum—not least, the steady and often generous financial contributions that flow in from traditional groups—and who enjoy good relationships with priests and parishes that peacefully celebrate the TLM will want to disturb them for the sake of falling in line with a temporary tyrant. Any bishop who genuinely loves the Catholic Faith, any bishop aware of the burgeoning love of tradition among the young and its power to revitalize the Church after the doldrums (not to say freefall) of recent decades, will quietly set aside this painful document and proceed as if nothing has changed—or rather, proceed in the certain knowledge that, as Rorate Caeli tweeted, “Francis will die and the traditional Mass will live on.”

On the pragmatic side, most bishops do not have a superabundance of clergy such that they could afford to alienate a sizeable number of their presbyterate. If enough priests in the more conservative dioceses stick to the Latin Masses to which they have an inalienable and unabrogatable right, what are the bishops going to do — throw them all out? Where will they get pastors? Where will they get future vocations? Do bishops need another huge headache on their hands, a civil war, a smouldering discontent that saps time and energy on all sides? Benedict XVI brokered a fragile peace, one under which a certain measure of non-polemical normalcy was possible. Many will want to keep that peace, such as it is, in preference to renewed hostilities.

I can personally vouch for this coffee--it's pretty good. At least the two varieties I recently tried with a gift certificate are. I like dark roasts:

UPDATE: I liked this from one wag:

Email ThisBlogThis!Share to TwitterShare to FacebookShare to Pinterest
Labels: Bergoglio