I have errands to run today, but here are two worthwhile articles that point toward the future--November, 2022.

The first appeared in the NYPost yesterday. It's basically a simple anecdotal recitation of the attitudes of increasing numbers of parents in New York City. The point is, however, that if NYC parents are getting this fed up, if NYC parents are increasingly asserting their rights as parents against the diktats of the State apparatus, then imagine what parental sentiment across the country must be like.

This is something that I emphasized before Election 2020, and return to regularly. Nothing hits home with parents and thus with voters like matters that affect their children. We're seeing this with the revolt against CRT imposed indoctrination in schools, and the revolt against unscientific masking is also gaining momentum. Candidates and political parties who ignore this reality of human nature do so at their peril:

Fed-up NYC parents demand an end to masking in schools 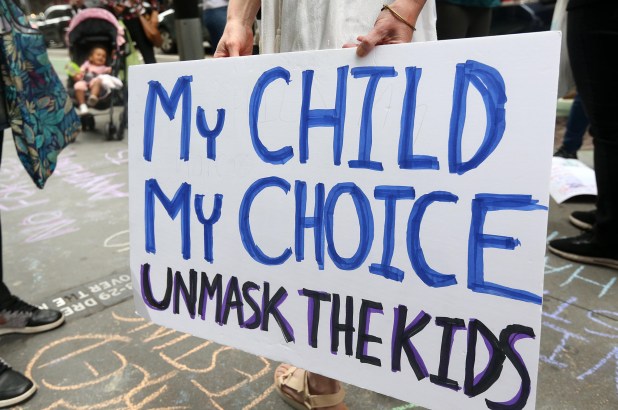 Fed-up New York City parents are demanding no masks in the classroom when school reopens in September.

Calling the coverings cruel, needless and detrimental to learning, some say they are even mulling homeschooling or private education options.

The mask debate comes as US health officials have warned that local governments across the country might start reimposing indoor face-covering requirements to combat the spread of the highly contagious Delta variant that is driving up case numbers in some areas.

Count on it. The government teachers unions will attempt to leverage a ginned up scariant panic into renewed school lockdowns. Parents whose children were herded into government schools are learning what the price is, for submitting to this union led regime.

Another article addresses the situation with police. For most of us, daily life goes on and slowly returns to something approximating reality. Not so for cops:

There's a lot that could be said about the role of police--at all levels--in the modern progressive and authoritarian state. Nevertheless, the police remain an essential service in modern society, as the Defund the Police movement and BLM/Antifa--not to mention the January 6 Event--continue to drive home.

This article is too long to excerpt at length, but is a compelling read:

For the past year, as violent crime has spiked in Chicago, the Police Department has been regularly canceling officers’ days off, mandating 12-hour days and sending police officers to neighborhoods they’ve never policed before.

In interviews with WBEZ, officers say this has sunk officer morale to new lows — and it comes after an extremely difficult year marked by the pandemic, civil unrest and intense scrutiny of police for their treatment of Black residents.

Mandatory overtime isn’t uncommon for CPD officers in the summer, but the frequency has increased this year and last.

The sergeant, like the nearly 10 Chicago police officers from different parts of the city interviewed for this story, spoke on the condition of anonymity. They fear getting in trouble for speaking candidly about the Police Department and CPD leadership.

This situation, too, isn't going away and points toward the upcoming elections.

What a world! What a country!