Dems To Attempt A Pivot To Trump?

That's what multiple sources are reporting, on good sourcing. The idea is, the Dems have finally realized what a trainwreck their Covid policy is becoming and they'll try to blame it all on Trump, as the developer of the vaccine.

Three points on this:

1) Yes, Trump mishandled the Covid Panic and shares some of the blame. I said at the time that he didn't have much choice or room to maneuver, but that's the way life goes.

2) However, the Dems have done so much to own this, have lied so much, that it'll be difficult to shuck all the blame--and, of course, there's plenty to go around. They have more problems with voters, even though this is a big one.

3) If you want a list of stuff the Dems own, start with Fauci and all his lies and flip flopping on policy, then pivot to school and business lockdowns, then let's talk about Wuhan and the China Flu. I'm gonna bet that voters will be of the fool-me-once mindset.

A few days ago Karl Denninger wrote a post that bears directly on what is happening--I Hate Being Right. Of course, this is all the stuff that Yeadon and Bhakdi and Vanden Bossche have been warning about. Still, read this excerpt, bearing in mind that he's talking about the Dread Delta, even though he doesn't name it. Also keep this clear--"low Ct number" = Bad:

The pattern here is one you ought to pay very close attention to.

The Ct numbers being seen in vaccinated "breakthrough" cases are materially lower than that seen in unvaccinated.

This makes sense and it is pure mechanistic proof of why using non-sterilizing vaccines in an active outbreak is stupid, even leaving mutational pressure and evasion aside (which we also know happens.)

A person who has a low Ct (higher infectiveness) without becoming symptomatic is a super-spreader because they have no idea they're infected.  If a non-sterilizing vaccine causes you to delay becoming symptomatic by as little as one Ct point you are twice as infective to others before you know you're dangerous and thus decide to stay home.

If "on average" you would become symptomatic at Ct30 but if vaccinated you get to Ct25 now you will be 32 times as infectious before you know you're sick.

The person who took the shot needs a label on them because they are far more dangerous to others if they become infected -- vaccinated or not.  In point of fact using a non-sterilizing vaccine during an outbreak, or accepting one, is criminal negligence for which those who are jabbed, if an infection is traced to them, should be prosecuted because they have deliberately made themselves unable to distinguish that they are dangerous until they are far more likely to infect others.

A hospital or other medical facility that employs jabbed people thus is committing gross malpractice in that the institution is deliberately causing their employees to be unaware of an infection they contract until they are far more-dangerous in terms of viral spread to others.  This, standing alone, is depraved indifference to human life since these institutions are allegedly professionals and thus should be held to a professional standard of conduct.

Just as with the original outbreak last spring in which I was able to trivially identify medical workers as the largest single vector and, I remind you, successfully predicted a huge explosion of civilian cases in Minnesota on that basis (which subsequently verified) I believe it is going to happen again and once again it will be the health care workers, who have all been "urged" or even "mandated" to take the jabs that will be the vectors into the general population and will end up killing people by the score.

Short version: Vaxxed people are dangerous potential superspreaders, especially of the Dread Delta. However, the Dread Delta could very well be a threat to the vaxxed, because the vax suppresses their symptoms while the disease develops ... and develops. That's why the regime has been telling vaxxed people to act as if they were never vaxxed. Of course, the regime is also trying to blame it all on the Dread Delta, but the truth is that Dread Delta isn't much of a threat to the unvaxxed, because they'll quickly become aware of their symptomatic infection.

This is about ADE--Antibody Dependent Enhancement. Experts have been predicting this from the beginning and urging the regime to abandon the vax the world campaign. If you need to refresh your recollection on ADE, go here.

Now compare Denninger's warning to what Rochelle Walensky is telling the NYT:

New research showed that vaccinated people infected with the Delta variant carry tremendous amounts of the virus in the nose and throat, she said in an email responding to questions from The New York Times.

The finding contradicts what scientists had observed in vaccinated people infected with previous versions of the virus, who mostly seemed incapable of infecting others.

That conclusion dealt Americans a heavy blow: People with so-called breakthrough infections — cases that occur despite full vaccination — of the Delta variant may be just as contagious as unvaccinated people, even if they have no symptoms.

Walensky is still trying to soft peddle the whole thing, but Denninger gets it.

Not only may these vaxxed people be contagious, they may also be at risk of serious virus related injury or even death.

Now, here's an interesting table that sundance posted this evening. It's taken from the study that Dr. Robert Malone flagged, and that I referenced this afternoon. Recall that Malone drew attention to the fact that:

There do appear to be patients that were dropped from the study and analyses.  This is an odd paper - not standard.

That's a pretty broad hint that the results may be even more negative for Pfizer than this paper and table show.

So, here's the table: 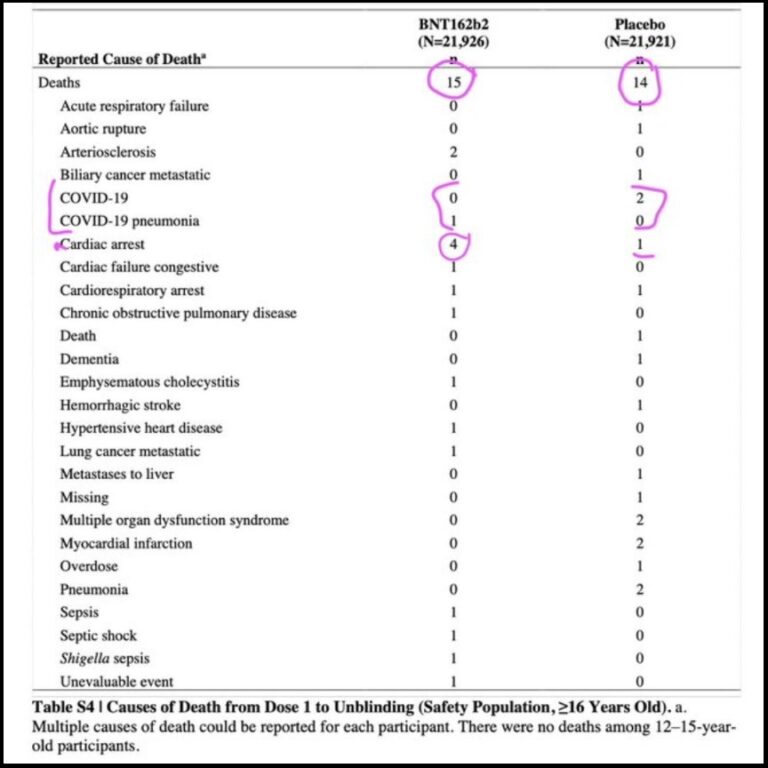 As sundance notes, in this study

44,000 patients were studied. 22,000 were given the vaccine and 22,000 received the placebo. The results amid both groups was almost identical.

Two COVID deaths in 22,000 for non-vaxxed (death rate of .0009%), and one COVID death out of 22,000 for the vaccinated group (death rate .00009%). In essence, COVID is not that dangerous and has a very high survival rate depending on co-morbidities or pre-existing medical issues.

So what's going on with the vax the world campaign? Except that Big Pharma gets super wealthy and spreads the wealth around the political class a bit, in the form of investments and campaign contributions and etc.

You have to wonder just how bad the situation is if it's come to the pivot to Trump.