Oh, and best wishes from my entire family.

As it happens, this exact deal didn't happen. Still, nothing ventured, nothing gained. And if Biden Inc. was about anything, it was certainly about venturing to gain. And so Fox is reporting, based on an email they've obtained:

It's a lengthy article, but this will give you a flavor.

The $10 million transfer to the joint venture was never completed.

Fox News obtained an email Hunter Biden sent on June 18, 2017, to Zhao Runlong at CEFC, asking that they please "translate my letter to Chairman Ye, please extend my warmest best wishes and that I hope to see the Chairman soon."

"I hope my letter finds you well. I regret missing you on your last visit to the United States," Hunter Biden wrote in the attached letter, dated June 17, 2017. "Please accept the best wishes from the entire Biden family as well as my partners."

He added: "We are all hoping to see you here again soon, or in Shanghai."

Biden went on to update Ye, saying that they have "concluded the establishment of SinoHawk Holdings," the Biden joint venture with CEFC, and said he looked "forward" to introducing him to his business associate Tony Bobulinski, who he wrote would "act as the CEO."

"He is a very close friend of James Gilliar and the Biden family and joined our team to focus on the execution of things as a partner," Biden wrote. "He has invested capital all over the world for some of the world’s wealthiest families."

I assume that the coy reference to the "entire Biden family as well as my partners" was to communicate that the entire Biden family would thereby be on the hook--including "The Big Guy." And in fact that seems to have been assumed in the ongoing negotiations. The Federalist expands on the Fox account:

“I would appreciate if you will send that quickly,” Biden wrote, to fund the Biden-led firm Sinohawk in partnership with Bobulinski who would serve as CEO.

The correspondence is dated just before emails published by the New York Post in October show Chairman Ye outlining a $10 million annual contract for Hunter Biden for “introductions alone,” a portion of which would be slated aside for President-elect Joe Biden funneled through Hunter.

Fox News’ blockbuster revelations gives further credibility to the Post’s earlier reporting this year, which was dismissed by corporate media who adopted Democratic talking points to chalk up the stories as Russian disinformation, and suppressed by big tech engaging in election interference in the final days leading up to the November contest.

Samples of how the negotiations were framed, from the NYPost: 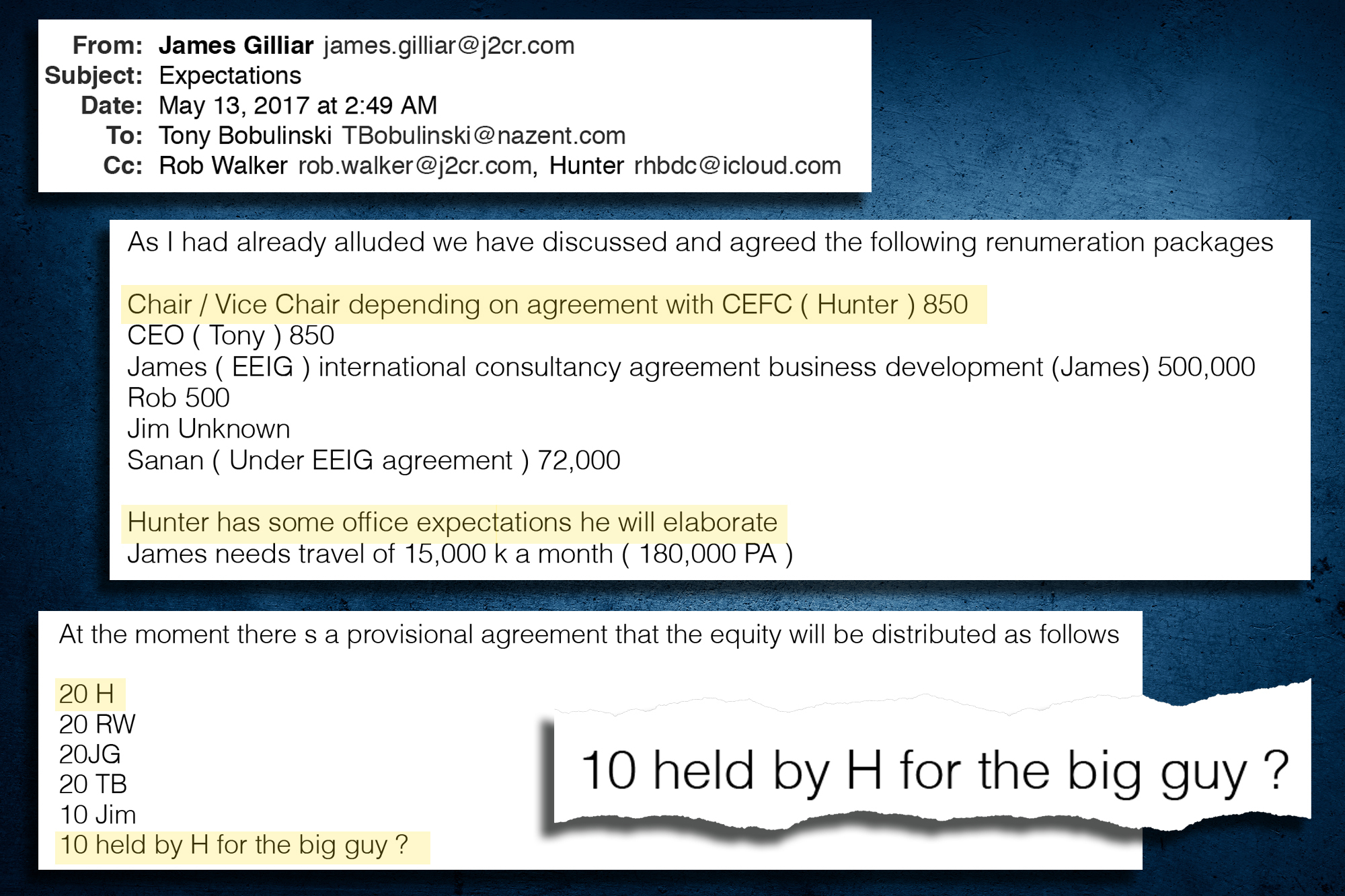 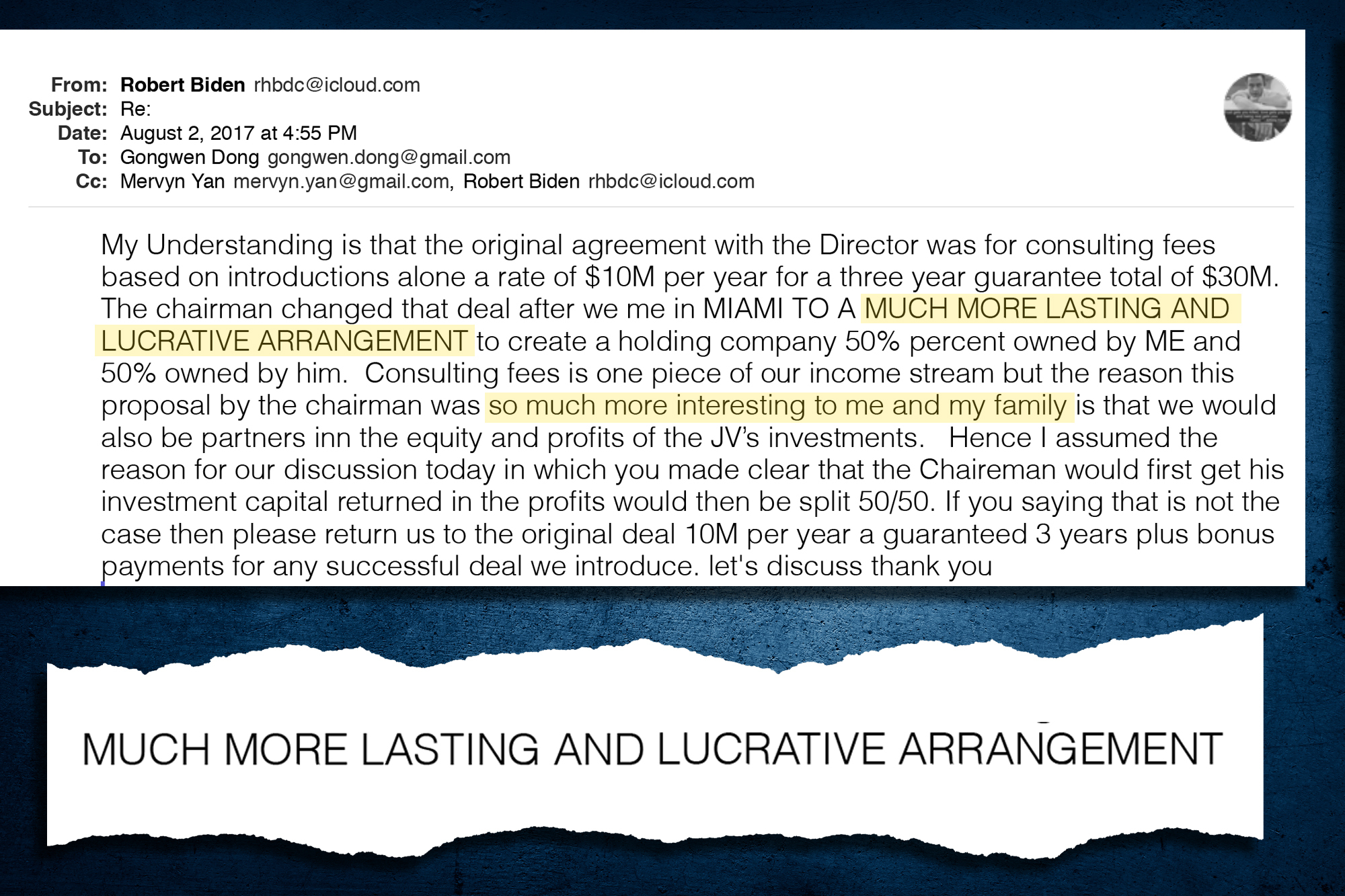 The real question--since this was all pretty much known months ago--is: Is this old news that can properly be ignored, except by right wing cranks? Or has it somehow gained relevance post election? One hopes the Media will send us the answer--quickly. It would be nice to have it confirmed that we really do have the best government money can buy.

UPDATE: Actually, there are some other interesting questions raised by this. For example:

Given the nature of this transaction, would Biden Inc. have hesitated to take advantage of election fraud?

What does it say about Establishment insiders--legislators and, yes, judges of both parties--that they appear to be down with foisting Biden on the nation--certainly to the extent of suppressing any awkward issues that would pose a problem in that regard? These dealings are part of the total context of what's been going on and will continue between the election and January 20. I seem to recall questions being raised about Trump's suitability for office based on known hoaxes. Is the real difference, then, simply a question of insiders versus outsiders? Or what?