Biden Lost 'A Sea' Of Hispanic And Asian Votes To Trump

I'm linking to the Daily Mail, which synopsizes a NYT story. One picture is worth a thousand words, so here's that picture, which shows the percent change between 2016 and 2020 in major metro areas where the precincts were at least 65% Hispanic/Asian. The change is pretty dramatic: 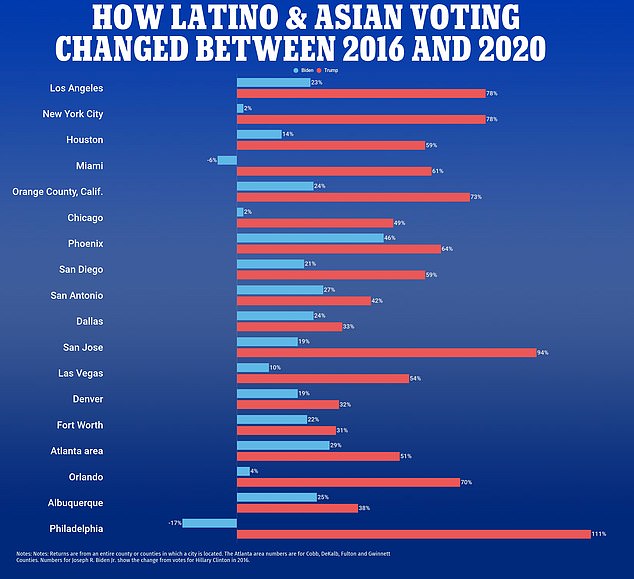 Here's some of the analysis:

Joe Biden lost a sea of Latino, Asian and immigrant votes in the election after being accused of taking them for granted and not putting in enough campaign outreach before November 3.

Detailed voter analysis by The New York Times that was released on Friday revealed how precincts where Latinos and Asians make up at least 65 per cent of the population in cities like Los Angeles, New York, Chicago, Miami and Philadelphia, pulled away from Biden.

He still won the overall Latino and Asian vote, but not by as much as in years past.

Biden did slightly better in precincts with majority black voters, but in many of those areas turnout and victory margins both were down, compared to 2016.

In counties where the population is 65 per cent Latino or of Asian descent, Trump made big gains.

For example, in Los Angeles, a study of 1,544 voting precincts revealed that votes for Trump increased by 78 per cent.

Trump also saw major gains in New York, where 38 per cent of residents are immigrants. Like in Los Angeles, votes for the incumbent in precincts densely populated by Latinos and Asian-Americans increased by 78 per cent, compared to 2016, with Biden being up by just 2 per cent in those areas, compared to Hillary Clinton's results four years ago.

In Chicago, precincts boasting large immigrant populations - including people of Mexican descent and other Latino groups - voter turnout was up this year, and most of the additional voters cast their ballots for Trump.

South Asian, Arab and Eastern European immigrants living in the suburbs of Chicago also favored the Republican president over his Democrat opponent.

And yet Biden "won." Black turnout was down, with Trump making significant inroads; Hispanic and Asian turnout was way up, with Trump making HUGE inroads; Biden had a 1/2 South Asian, i.e., Indian, running mate, but South Asians in IL (previously overwhelmingly Dem) went for Trump--and yet Biden "won." No, I don't buy that narrative either. What I think this narrative explains is precisely why so much fraud was necessary.

Here's an interesting aspect to keep in mind. These new Trump voters have backgrounds in countries where electoral rectitude is not something to be taken for granted--if elections are held at all. I would argue that these people will be receptive to the argument that the Big Steal by the Dems is a threat to everything they hoped for when they came to the US.