John O. McGinnis, a law professor at Northwestern University, writes today that the SCOTUS is now the "Barrett Court." In an admirably lucid article he argues that "the newest justice will change the dynamic among her colleagues." And, interestingly, we may see what McGinnis means by a 'changed dynamic' very soon--in the Pennsylvania election law case.

The way this changed dynamic works is actually quite simple. Chief Justice Roberts has been able in quite a few cases to shape the Court's decisions in ways that he prefers. He has been able to do this by alternately siding with either the four conservative justices or with the four liberal justices. Whichever side he takes in a 5-4 decision, as CJ he gets to either write the decision himself or choose who will write it. He also is able to influence the shape of the decision with the understanding that if the others don't go along with him, he can always go the other way.

if [Roberts] is not in the majority when the rest of the conservatives are, the right to assign the opinion will then pass to Thomas. Thomas remains the most committed originalist on the Court and can use the opinion assignment to put the law on his own preferred trajectory. The diminishment of Roberts’s power thus shifts authority to Thomas. Look for him to write more originalist opinions for the Court. Thomas can also assign opinions to the other strong originalists, including Barrett.

This is why I was so excited to see Thomas at the White House ceremony for Justice Amy. I took it as a signal that the two are of similar judicial philosophies. Of course, in any given case things could get more complicated than this, but the tendency seems clear:

The strengthening of the originalist camp leads directly to more originalist opinions. A justice assigned an opinion has some leeway to write it the way he or she wants, and more originalists will enjoy the drafting pen. Moreover, justices can move the law with powerful concurrences and even dissents, and we will see more such originalist efforts with more justices joining them.

Roberts' Pennsylvania decision was a 4-4 case. With Justice Amy now on board, this 'changed dynamic' could play out in her first major decision. If Justice Amy sides with the four conservatives, if they hold together--and the concurrences by Gorsuch and Kavanaugh in the Wisconsin case suggest that they will--then Roberts will find himself either in the minority or compelled to execute and embarrassing public volte face.

ADDENDUM: There's something about this photo I really like: 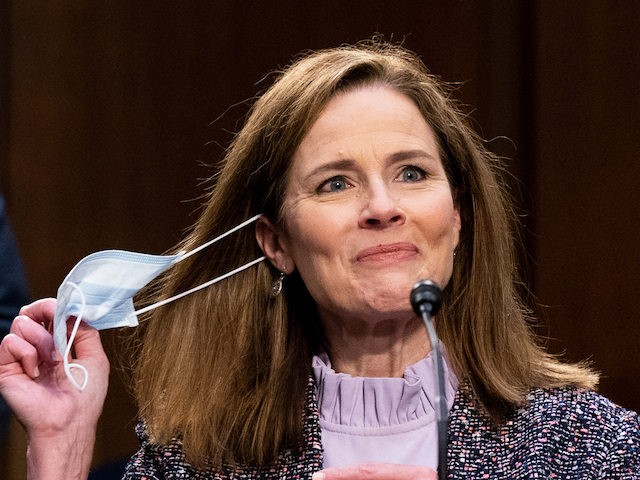