Quick--Can You Name A Federal Agency That Doesn't Spy On You?

I don't think I'd want to bet anything important--like, the price of a cup of coffee--on getting the answer to that question right. Not after reading this: 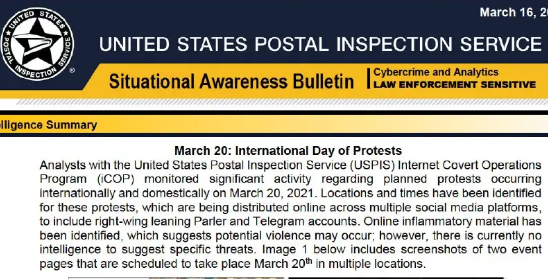 Among other things the USPS--and their cadre of those omnipresent 'analysts'--wants to know is, are you planning to protest Covid lockdowns? How many 'analysts' do you think the government has by now?

Even liberals found it all a trifle bizarre:

"It's a mystery" said University of Chicago law professor Geoffrey Stone - who was appointed by President Obama to review the National Security Agency's bulk data collection program revealed by Edward Snowden. "I don’t understand why the government would go to the Postal Service for examining the internet for security issues."

They wanted a bit of the domestic spying action? Extra funding maybe? Everyone else is doing it--all the cool three letter agencies--so why not us? I'm guessing.

“This seems a little bizarre,” agreed Rachel Levinson-Waldman, deputy director of the Brennan Center for Justice’s liberty and national security program. “Based on the very minimal information that’s available online, it appears that [iCOP] is meant to root out misuse of the postal system by online actors, which doesn’t seem to encompass what’s going on here. It’s not at all clear why their mandate would include monitoring of social media that’s unrelated to use of the postal system.” -Yahoo News

"If the individuals they’re monitoring are carrying out or planning criminal activity, that should be the purview of the FBI," said Levinson-Waldman. "If they’re simply engaging in lawfully protected speech, even if it’s odious or objectionable, then monitoring them on that basis raises serious constitutional concerns."

What interests me in all this is--When did it all start? I find it hard to believe that the Postal Service waited until January 20, 2021, before they got this program up and running. I'd be willing to bet that cup of coffee--or the price thereof--that this was going on under Trump. And that just goes to show how little control even a president has over the government. Especially when that president has been rejected by the Establishment--speaking of which, you won't be surprised to learn that the targets of the Postal Service are very much "right wingers".