I'm sure many or even most readers have seen the articles documenting the continued surge in gun sales--as measured by FBI background checks. It's an imperfect measure, but it probably gives a good general idea of the relative levels of firearm sales. Zerohedge (republished from Epoch Times) has a thorough review of the recent stats, which have set new records--FBI Gun Background Checks Soar To Record High In March Amid Gun Control Push. The all time record was a year ago March--2.3 million--but this year's March totals of 2 million wasn't far behind. Next month could be the month we break through to a new all time record.

A picture is worth a thousand words, so: 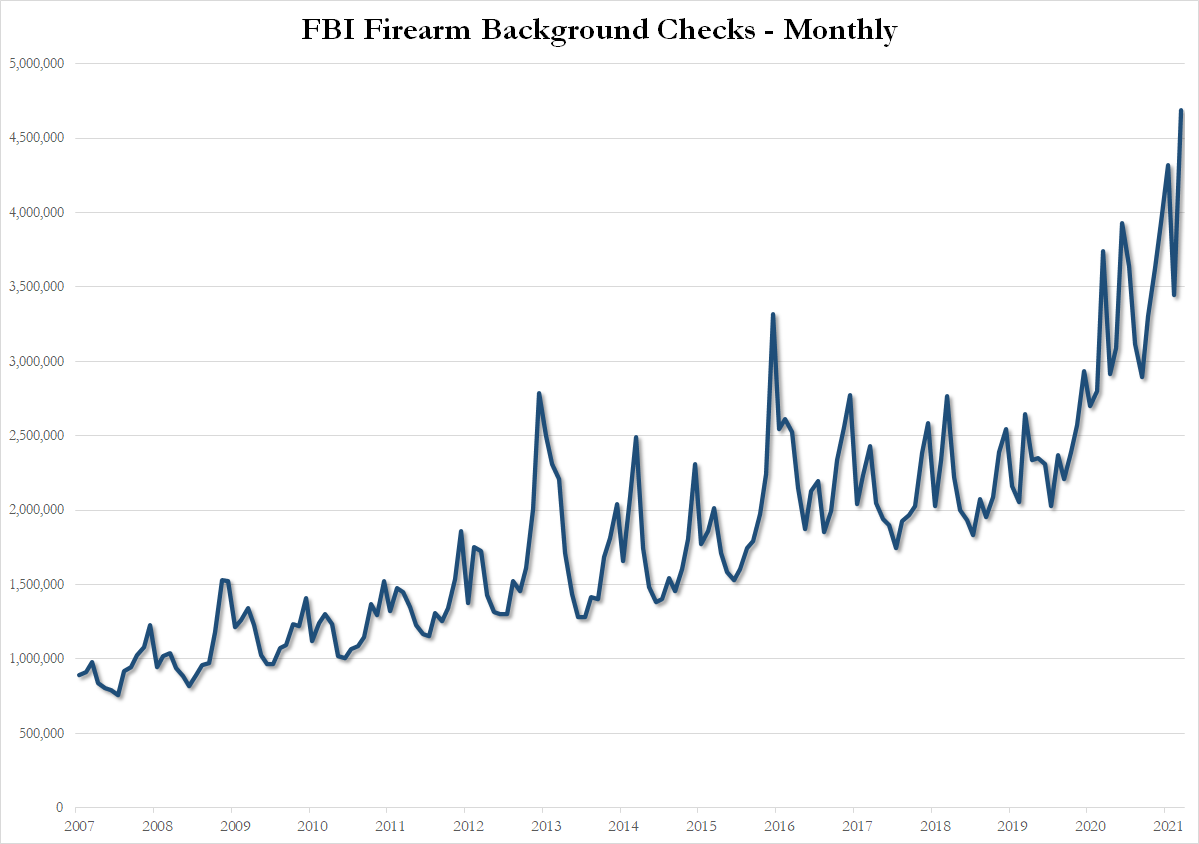 Of course, people buy guns for all sorts of reasons. The article presents two theories on what's fueling the current surge. While there's truth in both views, my guess is that the second one comes closer to the overall reality of what's behind it all:

“I think as long as you continue to see these misguided calls for gun control to chip away the rights of law abiding citizens and not look at legislation that’s going to keep firearms out of the hands of criminals, firearms on the hands of those who are adjudicated mentally defective, you’re going to continue to see Americans go out and exercise their right before that right is seized from them by their government,” Olivia said.

“The latest data released by the FBI shows that Americans continue to react to uncertainty by seeking self protection with a firearm. ..."

And speaking about the need for self protection, I read recently that--a full year after schools were shut down--only about half have reopened. Of course Catholic schools--and presumably many other private schools--reopened on schedule in September. They've been open ever since and have basically experience no problems--that's not something you'll hear a lot about. The difference, of course, is that private schools don't have to deal with government backed unionized teachers. Private schools are about the next generation, government schools are about pensions for government employees who contribute to Dem political campaigns. Big difference.

Government schools in my area--a greater metro suburban area--reopened finally this past week. Reports are that something like 80% of the kids came back. Meanwhile, in the limited reopening of Chicago's government schools attendance is running at something like 1/3--with schools in some of the most "underprivileged" neighborhoods sometimes running as low as 10%. It's an open question how many will ever return. Honest school administrators admit that many millions of children are simply dropping out and not even taking the tests. Come September, will the Dems send out the police to round up truants? And what will be the results.

The harm that the Covid lockdowns does to children is no mystery--it was predicted by child psychologists. The results that are being reported--both in test scores and anecdotally by teachers--bears it all out. While violent crime has surged in our cities, the Dems have been creating a new generation that will have missed--at a minimum and for now--at least a year of the threadbare socialization that's offered by government schools. My question is: What effect will this creation of a generation of unsocialized, or minimally socialized, young people have on crime? My guess is that the effect will be negative for the rest of society.