Below are what I regard as the most significant part of AG Barr's prepared statement for his Senate testimony this morning. It's refreshing in this age of disregard for principle generally to see a straightforward presentation of the hallowed ethical principles underlying the prosecutorial function, as well as an enunciation of the relationship of the Special Counsel to DoJ. All emphasis is mine. In my view Barr has done himself proud in this statement, and has provided a signal service to the country. It remains for his yapping critics to feel shame.

After the Special Counsel submitted the confidential report on March 22, I determined that it was in the public interest for the Department to announce the investigation’s bottom-line conclusions—that is, the determination whether a provable crime has been committed or not. I did so in my March 24 letter. I did not believe that it was in the public interest to release additional  portions of the report in piecemeal fashion, leading to public debate over incomplete information. My main focus was the prompt release of a public version of the report so that Congress and the American people could read it for themselves and draw their own conclusions.

The Department’s principal responsibility in conducting this investigation was to determine whether the conduct reviewed constituted a crime that the Department could prove beyond a reasonable doubt. As Attorney General, I serve as the chief law-enforcement officer of the United States, and it is my responsibility to ensure that the Department carries out its law-enforcement functions appropriately. The Special Counsel’s investigation was no exception. The Special Counsel was, after all, a federal prosecutor in the Department of Justice charged with making prosecution or declination decisions.


The role of the federal prosecutor and the purpose of a criminal investigation are well-defined. Federal prosecutors work with grand juries to collect evidence to determine whether a crime has been committed. Once a prosecutor has exhausted his investigation into the facts of a case, he or she faces a binary choice: either to commence or to decline prosecution. To commence  prosecution, the prosecutor must apply the principles of federal prosecution and conclude both that the conduct at issue constitutes a federal offense and that the admissible evidence would probably  be sufficient to obtain and sustain a guilty verdict by an unbiased trier of fact. These principles govern the conduct of all prosecutions by the Department and are codified in the Justice Manual.

The appointment of a Special Counsel and the investigation of the conduct of the President of the United States do not change these rules. To the contrary, they make it all the more important for the Department to follow them. The appointment of a Special Counsel calls for particular care since it poses the risk of what Attorney General Robert Jackson called “the most dangerous power of the prosecutor: that he will pick people that he thinks he should get, rather than pick cases that need to be prosecuted.” By definition, a Special Counsel is charged with investigating particular  potential crimes, not all potential crimes wherever they may be found. Including a democratically elected politician as a subject in a criminal investigation likewise calls for special care. As Attorney General Jackson admonished his United States Attorneys, politically sensitive cases demand that federal prosecutors be “dispassionate and courageous” in order to “protect the spirit as well as the letter of our civil liberties.”

The core civil liberty that underpins our American criminal justice system is the  presumption of innocence. Every person enjoys this presumption long before the commencement


3
of any investigation or official proceeding. A federal prosecutor’s task is to decide whether the admissible evidence is sufficient to overcome that presumption and establish guilt beyond a reasonable doubt. If so, he seeks an indictment; if not, he does not. The Special Counsel’s report demonstrates that there are many subsidiary considerations informing that prosecutorial  judgment—including whether particular legal theories would extend to the facts of the case and whether the evidence is sufficient to prove one or another element of a crime. But at the end of the day, the federal prosecutor must decide yes or no. That is what I sought to address in my March 24 letter.


4
report recounts ten episodes and discusses potential legal theories for connecting the President’s actions to the elements of an obstruction offense. After carefully reviewing the facts and legal theories outlined in the report, and in consultation with the Office of Legal Counsel and other Department lawyers, the Deputy Attorney General and I concluded that, under the principles of federal prosecution, the evidence developed by the Special Counsel would not be sufficient to charge the President with an obstruction-of-justice offense.

The Deputy Attorney General and I knew that we had to make this assessment because, as I previously explained, the prosecutorial judgment whether a crime has been established is an integral part of the Department’s criminal process. The Special Counsel regulations provide for the report to remain confidential. Given the extraordinary public interest in this investigation, however, I determined that it was necessary to make as much of it public as I could and committed the Department to being as transparent as possible. But it would not have been appropriate for me simply to release Volume II of the report without making a prosecutorial judgment.

The responsibility of the Department of Justice, when it comes to law enforcement, is to determine whether crimes have been committed and to prosecute those crimes under the principles of federal prosecution. With the completion of the Special Counsel’s investigation and the resulting prosecutorial decisions, the Department’s work on this matter is at its end aside from completing the cases that have been referred to other offices. From here on, the exercise of responding and reacting to the report is a matter for the American people and the political process. As I am sure you agree, it is vitally important for the Department of Justice to stand apart from the  political process and not to become an adjunct of it.


UPDATE 1: Not only is Barr, like, totally not backing down, some of his remarks will leave Dems in hysterics as they ponder the implications. Try this one on for size:

— AG Barr on whether @GeorgePapa19 really sparked the FBI counterintelligence investigation
 
8:37 AM - 1 May 2019


Uh oh! Does that mean he doesn't buy into accounts that were "given in the past"? That he wants to find the real truth? OMG! 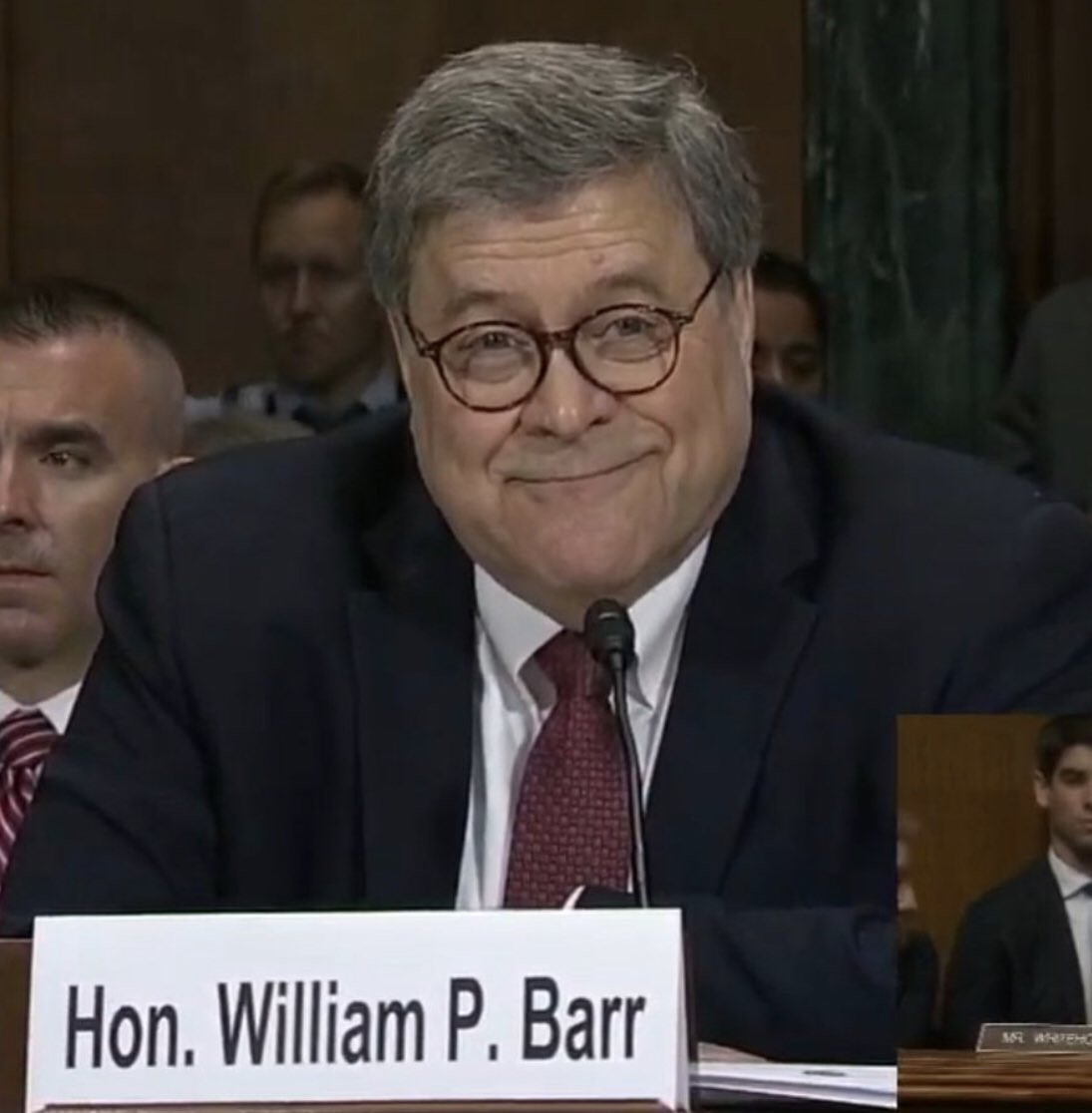 UPDATE 2: Oh my, tell it like it is, Bill--speaking truth to hypocrisy. Dem heads must be exploding:

Grassley: Was it the special prosecutor's job to make prosecutorial recommendations or declinations, rather than pass the buck to the AG?

Barr: Yes, we believe that was his job. If he didn't want to make a decision on an issue, he shouldn't have investigated it.

“We have multiple criminal leak investigations under way”
—AG BARR  

Mueller clearly wanted to give Barr a report he couldn’t release without weeks of work to redact grand jury and classified material.

This would leave a vacuum between delivery to Barr and the public release of the report.

Then Mueller could demand his own summaries be released.
 
...

Barr testifies that Mueller didn’t have an explanation for why he refused to reach a prosecutorial decision on obstruction, despite being asked three times about it by Barr in March.


Wow! I call that unloading on Mueller.

UPDATE 5: More vintage Barr--doesn't get personal re Mueller, but dismisses him with single word answers:

12) Graham: Do you think he [Mueller] did a thorough job?

Barr: Yes and I think he did a thorough job. And had adequate evidence to make the calls.

13) Graham: Do you think the president's campaign in 2016 was thoroughly looked at in terms of whether or not they colluded with the Russians.

14) Graham: The answer is "No" according to Bob Mueller.

15) Graham: He couldn't decide about Obstruction. You did. Is that correct?

16) Graham: Do you feel good about your decision?

Graham: Thank you very much.
/End

BLUMENTHAL: Let me finish my question.

BARR: You didn’t let me finish my answer.

BREAKING: AG Barr testified today that "I'm not going to back off the word spying" to describe covert intelligence operations launched against the Trump campaign and presidential transition, particularly when such secret surveillance is "unauthorized and inadequately predicated."

@AndrewCMcCarthy
 
So he wasn’t saying the letter was inaccurate, but was worried about media coverage and whether his narrative would dictate it. Story of the whole investigation. We can read the report ... the rest is diva noise.
 
7:46 PM - 30 Apr 2019

Danang Dick: Can we have those notes?

Barr: Why should you have them?


UPDATE 10: In response to a question from Sen. Tillis regarding IG Horowitz' investigation, Barr responded:

I don’t want to be too specific; I talked to Mike Horowitz a few weeks ago about it, and its focused on the FISA, the basis for the FISA, and the handling of the FISA application. But by necessity it looks back a little bit earlier than that.  The people I have helping me with my review will be working very closely with Mr. Horowitz.


Hmmm. What would that "a little bit earlier" involve? Possibly the predication for the investigation itself which was the vehicle for the FISA application, IOW, Crossfire Hurricane, since the probably cause for the FISA application would be largely based on the predication for the investigation. And that gets us into Steele dossier territory, Alexander Downer territory, and so forth.

I am not up on the stages of grief, but the Democrats are in one of them, grieving through their loss of the belief that Robert Mueller would deliver them from the illegitimate Trump presidency. They can’t quite give it up. Thus, when they view the slightly-redacted Mueller report–far less than one percent is blacked out, and Congressmen can view the unreacted version at their leisure–they are like the boy in the old joke. They are convinced there must be a pony in there somewhere.