This news came out this afternoon. The meeting is to evaluate the unexpectedly high number of reported instances of heart inflammation (myocarditis and pericarditis) being reported after Covid vaccination, and especially affecting young men. We've mentioned this previously, and there have been multiple reports from Israel on this score as well.

There are naturally several different accounts available, but CTH has a nice short version from Reuters as well as a graph from CDC. Here's the title line from ZeroHedge:

The ZeroHedge post is longer, but here's the Reuter's report as quoted at CTH, which gives you the essence of what's going on:

REUTERS – “A higher-than-expected number of young men have experienced heart inflammation after their second dose of the mRNA COVID-19 shots from Pfizer/BioNTech and Moderna, according to data from two vaccine safety monitoring systems, the U.S. Centers for Disease Control and Prevention (CDC) said on Thursday.”

[…] “We clearly have an imbalance there,” Dr. Tom Shimabukuro, deputy director of the CDC’s Immunization Safety Office, said in a presentation to an advisory committee to the U.S. Food and Drug Administration meeting on Thursday. The overwhelming majority of the cases have occurred within a week of vaccination, Shimabukuro said.” (read more)

Sundance, alluding to Big Pharma's big push to vax young people who are not at any discernible risk, comments:

“All your children are belong to us”…

Now here's the graph from CDC: 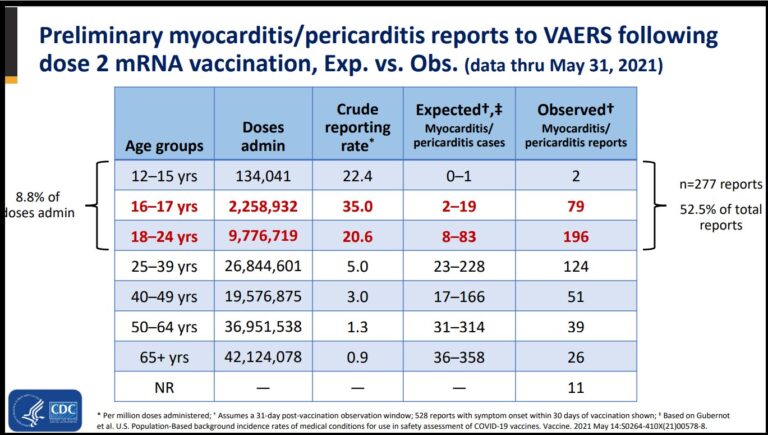 What stands at a first glance is that the expectation was that there might be fairly high numbers of adults suffering these effects, from age 40 and above. Instead, as quoted by Reuters, the effect is being felt by younger people at rates much "higher than expected." At the same time, those numbers overall appear to be quite small compared to the total doses administered (2 doses per person, so persons vaxxed = half the doses administered).

There are a number of considerations here.

First, these numbers reflect the VAERS database reporting, which means these are voluntary reports. The likelihood is that these were reports filed by doctors, so they reflect only those persons who presented themselves to a doctor--and past history has demonstrated that VAERS reporting tends to be far lower than the real numbers. How many more persons are out there who have been affected, and what is their prognosis? Those turning themselves in to a doctor within a week or two are simply those suffering immediately apparent side effects--that doesn't mean that the real number may not be quite a bit higher than is know. I don't know, but I suspect that these unknowns are major reasons for the emergency meeting.

Second, this situation reflects a new development in an ongoing situation--the very high numbers of deaths and serious injuries associated with the Covid vaccines in comparison to all other vaccines. These numbers, again, are based on VAERS reporting, and so are certainly low--how low is not known. However, as above, they only reflect people who present to a doctor because they realize that something is wrong enough to require medical attention. Some side effects are likely not experienced at this point in time. For example, the high concentrations of spike proteins found in the ovaries, testes, and adrenal glands is very concerning, because the spike protein is a pathogen that is likely to cause damage at those locations (as well as the already known issue of blood clots in the brain).

A commenter at FR expresses this view of things:

This is just one of the side effects the vaccine stake-holders are at least forced to admit. Just wait until the reproductive organ destruction for both male and female is finally released. The protein spikes were never supposed to get into the wide-spread circulatory system and imbed in the lining of not just the arteries, veins and the heart, but all other organs including the brain.

What he's talking about is something that we covered in We Made A Big Mistake. If you recall, a prominent Canadian vaccine developer, Dr. Byram Bridle, obtained a Japanese regulatory agency report that detailed where the Pfizer vaccine's spike proteins travel in the body. What Bridle learned was confirmation that, contrary to expectations--you've heard that before, right?--the spike proteins are entering the vascular system and are being disseminated throughout the body. With regard to the heart inflammation issue, what this means is that heart inflammation is simply one more of a wide range of side effects that are being discovered. Thus the alarm and the emergency meeting.

I'll paste in the excerpts from the LifeSite article about Dr. Bridle's discovery, but if you follow the link to my earlier post there's also a transcript of an interview with Bridle, in which he discusses his findings. Note the real bottom line: Contrary to expectations, the spike protein--a known pathogen--enters the vascular system, is widely distributed throughout the body, and winds up in large concentrations in certain areas where it's likely to cause damage. This is not how these vaccines were supposed to work, but it is how they are working:

May 31, 2021 (LifeSiteNews) — New research shows that the coronavirus spike protein from COVID-19 vaccination unexpectedly enters the bloodstream, which is a plausible explanation for thousands of reported side-effects from blood clots and heart disease to brain damage and reproductive issues,a Canadian cancer vaccine researcher said last week.

Bridle, a vaccine researcher who was awarded a $230,000 government grant last year for research on COVID vaccine development, said that he and a group of international scientists filed a request for information from the Japanese regulatory agency to get access to what’s called the “biodistribution study.”

The results of this leaked Pfizer study tracing the biodistribution of the vaccine mRNA are not surprising, “but the implications are terrifying,” Stephanie Seneff, a senior research scientist at Massachusetts Institute of Technology, told LifeSiteNews. “It is now clear” that vaccine content is being delivered to the spleen and the glands, including the ovaries and the adrenal glands.

The high concentration of spike protein found in testes and ovaries in the secret Pfizer data released by the Japanese agency raises questions, too. “Will we be rendering young people infertile?” Bridle asked.

Obviously the issue of infertility won't turn up for at least a year or two. Other conditions may also be discovered as time passes. It's all a huge experiment.

Isn't it interesting that Zhou Baiden wants to push this experiment off on the rest of the world? Altruism?