Stephen Bryen is a former top Pentagon official (read his resume here), including as the founding director of the Defense Technology Security Administration. Within the past week he's been speaking out on the Covid origins matter, spurred by recent revelations. With his wife he wrote an opinion piece for Newsweek, and he also recently gave an interview to Just The News. Bryen's main argument is simply that the US government--at least DoD and the scientific establishment--were not just funders of research at Wuhan. They were partners, and they were partners with a Chinese biowarfare program. He is convinced that there's a lot more to this story than what we've been told thus far. This would certainly explain features of the Covid origins coverup, because it has been clear to me that Tony Fauci could not have constructed his web of lies if not spurred on from more powerful players than himself. It also explains why reputable scientists were willing to spout nonsense for so long. They would not have done that simply to save Tony Fauci's sorry ass. I suspect this was presented as a National Security issue.

What I'll do here is, first, insert what amounts to a precis of the Bryens' opinion piece at Newsweek. Then I'll provide a transcript cum summary of his remarks to Just The News--because that interview goes beyond what he wrote for Newsweek. Please note toward the end his statements re elements of HIV having been added to the Covid genome. As we've noted several times in the past, that is exactly what the Indian scientists were maintaining as early as January, 2020--but they withdrew their article when Fauci labeled it "outlandish." One can only speculate on how much influence was brought to bear on the Indian scientists--and by whom. Bryen thinks we need the equivalent of a War Crimes trial, because what has happened is equivalent--his words--to "a genocide."

So, here we go, from Newsweek:

[Following revelations showing that the Covid virus was engineered in the Wuhan lab] ... Western governments, journalists and scientists, not to mention American research institutions and social media companies, ...

... are engaged in a concerted campaign to blame COVID-19 on an accidental lab leak from the Wuhan Institute of Virology. But this new theory simply transfers a slim line of information from one silo to another, and its proponents rigorously refuse to ask tough but necessary questions.

The first dots to connect are the coordination, money and cooperation between American institutions and the Wuhan Institute. University of North Carolina researchers established a partnership with the institute years ago. ...

What about the money? Zhengli's [sic, her 'last' name is Shi] 2015 study, titled "A SARS-like cluster of circulating bat coronaviruses shows potential for human emergence" and published in Nature, reported funding from the NIH, the National Natural Science Foundation of China and the EcoHealth Alliance. ...

The virus from Wuhan appears synthetic—that is, it does not resemble anything in nature. And it is a killer, as proven by what the world has experienced since late 2019. ...

The evidence points to the uncomfortable conclusion that elements of the U.S. government were working on and supporting a human killer virus.

But there's one more question investigators need to ask: Could COVID-19 have been developed as a biowarfare agent?

The U.S. has a vested interest in supporting the lab leak thesis and the argument that the Yunnan Copper Mine was the initial source for COVID-19. The theory that important research was going on, but the leak was an unfortunate accident, absolves American politicians and elite institutions. But if the virus was part of a biowarfare program, the U.S. has a big problem—because it would mean we spent years and millions of dollars supporting a Chinese military program in the Wuhan lab.

Honest scientists and journalists have to consider American culpability.

Next the transcript from Just The News. It's very accurate, although I've omitted questions and have cleaned it up in certain places for purposes of readability:

The Pentagon knew the Wuhan Institute of Virology was not merely "a civilian operation, but that it was involved in Chinese biowarfare," said Stephen Bryen, founding director of the Defense Technology Security Administration.

Stephen Bryen, the founding director of the Pentagon's Defense Technology Security Administration, believes it's time for the U.S. to confront its own culpability in the COVID-19 pandemic — starting with tough questions about the Defense Department's funding of the Wuhan Institute of Virology, the Chinese lab now widely suspected as ground zero in the spread of the SARS-CoV-2 virus to humans.

It looks to us as if the US is complicit, because we funded the research at the Chinese laboratory in Wuhan. We did it for many years. At least six years, maybe ten--no one knows exactly. There were a number of grants that came from the scientific establishment of our government, but also from the Pentagon. Believe it or not, the most money came from the Pentagon.

The fact of the matter is, we were partners with the Chinese. It wasn't just that we were providing money. It was a partnership. When you're partnered on something it's pretty dramatic. We knew very well that the Wuhan virology institute was not just a civilian operation, but that it was involved in Chinese biowarfare and other activities. In fact when the outbreak came they replaced the head of the lab with a People's Liberation Army (PLA) general, a specialist in virology. It was part of China's biowarfare establishment.

What were we doing there? CIA has been warning about biowarfare for more than a decade. And warning strongly. There have been special panels convened at the highest level, in the White House, about the threat of biowarfare. We had a very good idea of what the Chinese were doing. And other people, Russians, ... A lot of people are doing this, but it's extraordinarily dangerous. Gain of Function research, when you're modifying viruses, something different from nature, it's an entirely new game.

So, what were we doing there, and why was the US government so interested in partnering with this Chinese outfit? I don't think we have the answer. I have my own suspicions, but we don't have the answer.

[Re Fauci's disclaimers of knowledge re what was going on in Wuhan, laughing] Believe what you want. I don't know that that's true. It sounds like the Sergeant Schultz kinda answer. Nonsense. He knew what he was doing. His agencies knew what they were doing. The Defense Department HAD to know what it was doing. So what were they doing, why were they doing it? Why were they taking this kind of risk? We need answers, and I don't think the government can investigate itself. Because the government's complicit.

[Bryen calls for a special counsel]

I think it's a crime, it's a crime what's happened. I don't know that presidents understood what was going on, cuz they weren't told.

[Compares this to war trials of Nazis and Japanese, says this was that bad.] Let's face it.

The other partner was the Chinese government.

There was certainly scientific reason to be interested in GOF research. They chose China [after the US ban] because China was working very hard on SARS type coronaviruses. But we also know that this same laboratory was doing other things. And even when you look at the genome of the SARS virus, of the Covid-19 virus, you see some very funny things. I wonder if our people here in the US knew about those funny things. If you want me to, I'll tell you what those funny things are.

The funny things are that in the Covid-19 or coronavirus that we're being infected with there are also strains of the HIV or AIDS virus that have been put in there by the Chinese researchers. The reason for that, I don't think the US people knew it. But that remains to be proven.

UPDATE: After putting the link for this graph in a comment I decided to the graph in here. This is a graph constructed from the data that Dr. Byram Bridle obtained from the Japanese health regulatory agency. What it represents is the "bio-distribution" for the Pfizer gene therapy injection. In plain English, it tracks where the spike protein--now known to be a highly toxic pathogen that's responsible for the huge numbers of deaths and side effects--shows up in the body for the first 48 hours after the injection. Dr. Robert K. Malone vouches for the accuracy of this graph in a 3 hour episode with Bret Weinstein and Steve Kirsch. Malone also states that, whereas it was initially believed that the spike protein would be biologically inactive, it is now known that it is biologically active and travels throughout the body. The startling accumulation in the ovaries is one reason that responsible scientists fear that women who take this injection could wind up sterile. And the colleges and universities are trying to compel students to be injected. 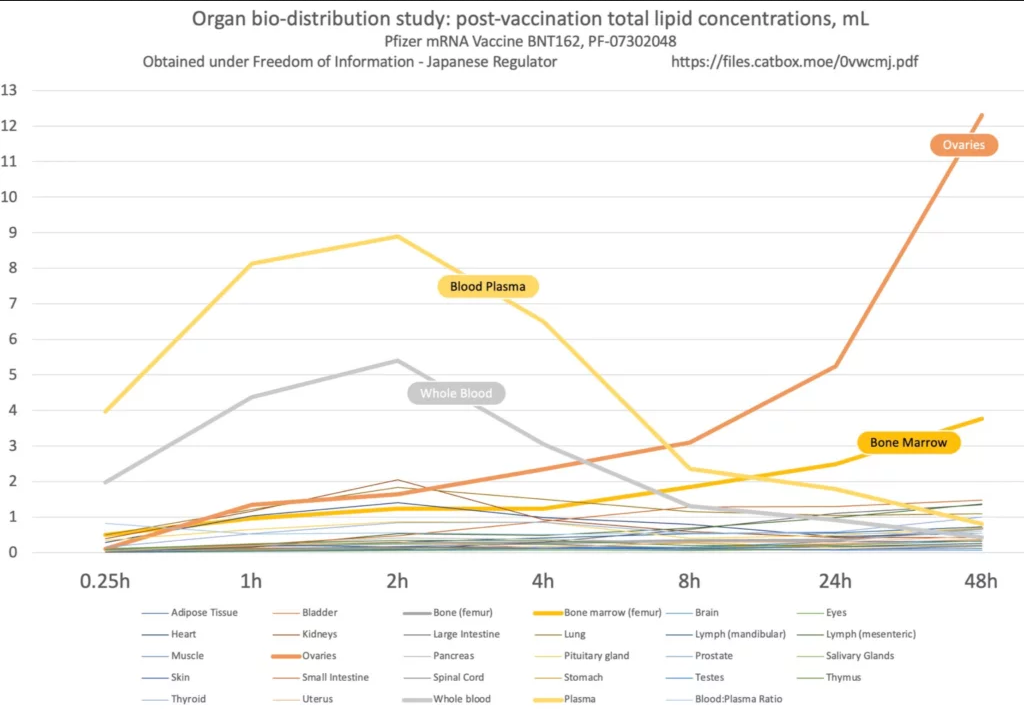