This is interesting. Please note that Senator Paul is incorrect. It is NOT true that there was no difference in the reinfection rates for those who were vaxxed and those who were non-vaxxed-but-previously-infected. We'll quote from the study below. The significance of this study--in part--is that it really does establish that naturally acquired immunity is preferable to vax acquired immunity. Moreover, if we're to believe top epidemiologists, there are many, many millions of people who fall into the "previously infected" category.

This information frees up millions of doses of vaccines for those not yet infected in places with vaccine shortages like India.https://t.co/V5EOqZ1CPm

Now, first we look at the results of the study in a graph. Please note that, despite the dramatic looking lines, the actual real world incidence of Covid infection in the study group was extremely low. Feed into that the reality of extremely low mortality rates for working age people, if you're inclined to wonder what this means for overall risk assessment. Nothing changes from what we already know. Also feed into that what we know--but which the medical establishment is still trying to hide from us--about highly effective and inexpensive medications for treating Covid. 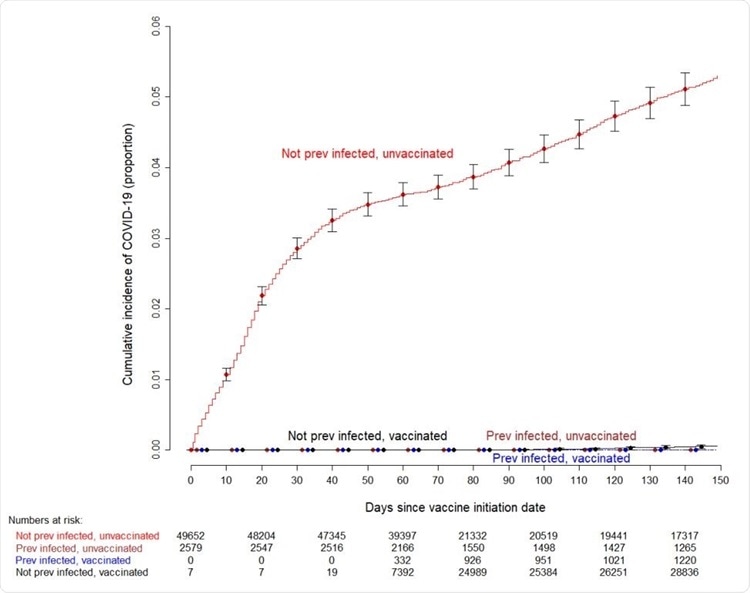 But also note that, while the bottom two lines are extremely close, they are not identical. I quote here from the linked article:

of all infections during the study period, 99.3% occurred in participants who were not infected previously and remained unvaccinated.

only 0.7% of infections occurred in participants who were not previously infected but were currently vaccinated.

not a single incidence of SARS-CoV-2 infection was observed in previously infected participants with or without vaccination.

Here's the bottom line: If you have had an encounter with Covid in the past--and we know that's not the only way to acquire natural immunity--YOU WILL NOT BE REINFECTED.

Never say never in these situations, right? But the chances definitely verge on no chance at all.

Well, isn't that 0.7% infection for the vaxxed population rate pretty good? That depends. In a population as large as that of the US, that reinfection rate actually adds up to quite a few people. Certainly millions. The study, unfortunately, doesn't mention two matters of absorbing interest. First, it doesn't mention what the outcomes were for those in the 0.7% who were infected after being vaxxed--nor does it mention side effects, for that matter. Second, it doesn't tell us whether any effort was made in examining that 0.7% to distinguish Covid as naturally occurring ("breakthrough infection") from the possibility that what looked like Covid was actually caused by the vaccine, through antibody-dependent enhancement (ADE).

Here's the bottom line, in my opinion. It's a legal bottom line. Anyone who has been previously infected simply should not be participating in a medical experiment of this sort. There's no reason for them to do so, and there are very definite risks, up to and including death--as the databases of side effects in both the US and Europe confirm. These vaccines are many times more dangerous than previous vaccines. This is true for all four vaccines. For those who are resisting the efforts to force them to participate in a medical experiment, this is powerful evidence that blanket mandates are utterly unwarranted from a sound scientific standpoint. There are ways to distinguish risk factors, and no one should be forced to participate in an experiment like this.