When Is True Information Not Authoritative?

Apparently when it suits Google. The story today is that Google has been funding Peter Daszak's adventures with bats and coronaviruses in China since about 2010. Which means that when Google suppressed search references regarding the origin of Covid-19 in the Wuhan lab they knew that they were suppressing information that was quite possibly true, and which certainly was highly relevant to the question of Covid origins. Especially given that Indian scientists had already identified the Covid virus as lab engineered by January, 2020. The problem, says Google, is that that information was somehow not "authoritative" and, so, had to be suppressed.

Google can afford to employ the best PR people and the best lawyers in the world. Far be it from me to engage in hindsight advising, but this is one of the those things that can't be walked back and will never look better than dodgy. Suppressing information that you feature in? That's some kinda power.

Tucker Carlson thinks it's dodgy, too. And he says so: Tucker Carlson discusses report that Google funded Peter Daszak and the Wuhan Lab.

There's a nice piece at Zerohedge that looks at this whole phenomenon of truth versus authoritative information, i.e., truth versus narrative:

Late Stage Globalism: When Anything That Is Not Censored Is A Lie

I had to think about that for moment, but then it clicked.

Fortunately, people are going elsewhere to get their information--elsewhere than the establishment media platforms:

Until now the masses seemed to be inculcated with the slow burn of endless propaganda and sermonizing from as far back as the days of Edward Bernays (who coined the word “propaganda”). Now with the pandemic and all this talk about a Great Reset and the New Normal because of a virus that was made more infectious in a Chinese lab funded by US technocrats, this is all beginning to look (in the immortal words of The New York Dolls) like “too much, too soon”.

It may turn out that there is a saturation level of manufactured narrative that the public can be led to believe or tolerate and beyond that point it all begins to look like hyperreality. Not only do fewer people believe it anymore, more of them are done with even pretending to believe it.

With too many things that were presented to us as truthful information over the last year turning out to be wrong, or a lie and almost everything that was dismissed as “already debunked conspiracy theory” turning out to have more substance, we may be crossing that point now.

The biggest audiences to be found aren’t on CNN or MSNBC anymore, but most of the people still watching TV are watching FOX, mainly because Tucker Carlson and Laura Ingraham are calling b/s on nearly every establishment talking point. 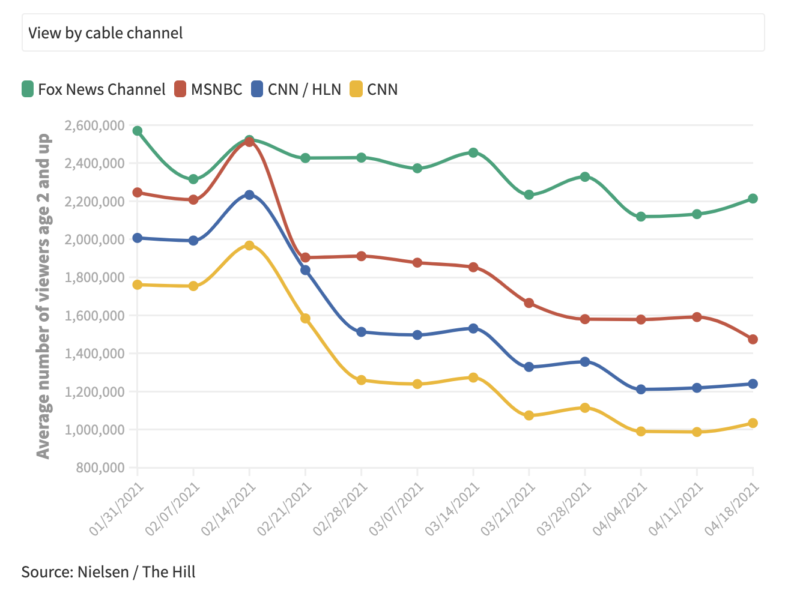 But I’m looking beyond that, outside of network TV. The hottest news outlets are fast becoming independent journalists like Matt Taibbi and Glenn Greenwald, self-publishing via their Substack. That’s mainly email.

Joe Rogan has a larger audience than Rachel Maddow and Don Lemon combined. So too does Steve Bannon, btw. The few times I’ve been on his Warroom I was astounded at the reach of his audience. According to company sources he’s doing between 2.5 and 3.5 million downloads per day. The last people I would ever expect to be tuning into Bannon are telling me “I saw you on Warroom”.

And here's a bit of true and (presumably) authoritative information that maybe people will figure out:

A new data analysis from Harvard University, Brown University, and the Bill and Melinda Gates Foundation calculates how different employment levels have been impacted during the pandemic to date. The findings reveal that government lockdown orders devastated workers at the bottom of the financial food chain but left the upper-tier actually better off.

The analysis examined employment levels in January 2020, before the coronavirus spread widely and before lockdown orders and other restrictions on the economy were implemented. It compared them to employment figures from March 31, 2021.

The picture painted by this comparison is one of working-class destruction.

The data are damning. They offer yet another reminder that government lockdowns hurt most those who could least afford it.

Here's an idea. Why don't we hold an election on truth, who's been suppressing it, and why it all matters.