The flood of information and commentary has been overwhelming--even if it basically just confirms what has been known by anyone who cared to know within a month or two of the onset of Covid Panic.

It's impossible to cover it all, and much is repetitive. However ...

A good place to start is this relatively short piece regarding Gulf War Syndrome. Gulf War Syndrome, as it happens, was a reaction to a government sponsored anthrax vaccine. The developers took shortcuts and failed to do basic safety checks.

Sound familiar? Consider: the VAERS reporting system for Covid vax "adverse effects" is at ~ 4,500 dead and counting, while vast numbers of people at no risk--the young and very young, those who were infected and now have natural immunity--are now being pressured to put themselves at needless risk, with possible lifelong consequences especially with regard to reproduction. Other groups being pressured to vax up--pregnant women and the aged, for example--were excluded from the all too brief safety trials. Would your government really do things that stupid?

Glenn Reynolds is one who doesn't need much convincing. And, being a law professor, he presents his views in the most measured of terms:

ARROGANT, INCOMPETENT, AND POLITICIZED EVEN WHEN NOT ACTUALLY CORRUPT: THAT’S THE KIND OF PEOPLE WHO RUN OUR INSTITUTIONS NOW.

Notice how cautious he is, true to pedigree? He leaves out: CRIMINAL.

Reynolds also links to an excellent summary at Legal Insurrection of what we've learned this week:

While the propagandist media is busy fawning over Fauci as some sort of superhuman godlet who was single-handedly battling WuFlu in some kind of one-man cage match against President Trump and the Wuhan coronavirus, these emails reveal a startling truth. They tell the story not just of Fauci’s blatant, politically-motivated lies to the public but also the great lengths the legacy media and Big Tech went to shut down any discussion of the virus’s origins or mask use efficacy. It was not about stopping the spread of “misinformation” but was a calculated political ploy to shut down the truth.  But we knew that.  And now we have proof.

Now Big Tech is facing a reckoning because it essentially stifled reasonable debate, including methodological and scientific studies, that countered national Democrats’ desired narrative. As a result, Facebook had to walk back the bans and allow this “misinformation” to be shared because the silenced reports have turned out to be correct.

Please don’t get excited. Big Tech won’t learn from this debacle. Instead, they will continue to decide what people can and cannot discuss. National Democrats, who will always insist on their partisan political narrative over truth, will continue to dictate these decisions from on high.

The truth may out, but the Democrats will have achieved their goal by the time it does. So what do they care if their media activist arm and their Big Tech enforcers have egg all over their faces?

Is the author wrong in his baseline judgment? It would take someone more foolhardy than myself to assert that. I'm not foolhardy, but perhaps I'm a bit naive (remember Bluto Barr and Bullsh*t Durham--I do to my shame and regret). Would it be too much to ask whether our Nine Black Robed Guardians of truth, justice, and the First Amendment should find a suitable case and weigh in on this debacle of our constitutional order?

Here's a tweet from the LI piece that pretty much says it all:

It boggles the mind at what could be so sensitive that a bureaucrat’s take on mask wearing from April 2020 would need to be redacted from the #Fauciemails 🤔🤔 pic.twitter.com/qjr7gU5Efy

What doesn't boggle the mind is the notion that something is being hidden from the public.

And then there's Sharri Markson hammering away. Is it about time for Kristian Andersen to be called in front of the Senate? For one brief, shining, moment he tried to clue Fauci in to the reality of the Covid origins. Then, it seems, he realized that the dispensers of government grants had other ideas:

Scientist Kristian Anderson told Fauci SARS-CoV-2 has “unusual features” that “potentially look engineered”.Not long after this email, the scientists authored a piece insisting the virus was natural and Fauci said the same publicly. This is a massive cover-up.(Buzzfeed FOIA) 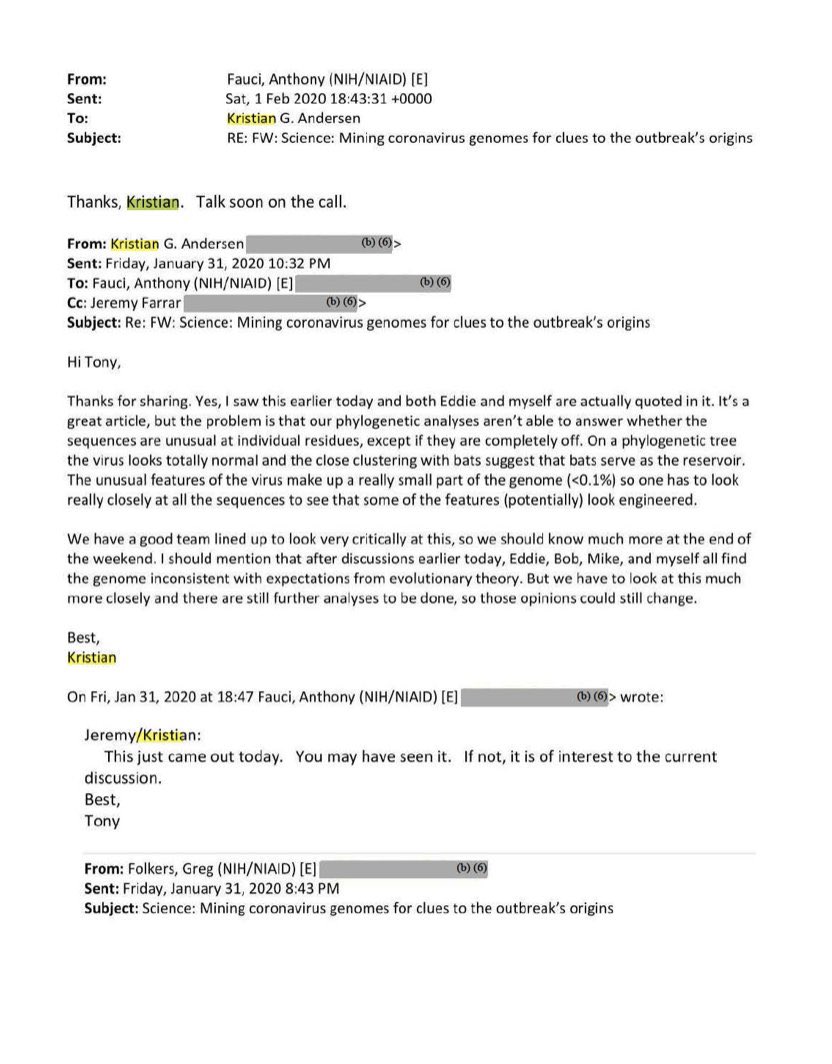 This email also says the genome of SARS-CoV-2 appears “inconsistent with expectations from evolutionary theory”.Yet, other scientists who raised this same point were shut down and ignored, while journalists investigating it were accused of peddling a debunked conspiracy theory.
Fauci misled the public by failing to say the virus may have been the result of gain-of-function experiments at a Wuhan lab.No one knows more about this research than him - including the risk of a pandemic.But he never once mentioned it during conversations in the Oval.
Fauci wrote in 2012 that gain-of-function research could spark a pandemic but he felt the benefits of it outweighed the risks.Now we learn he knew about the unusual features of Covid-19 early last year but didn’t say a word.This is a monumental cover-up. He needs to resign.
It is incomprehensible for an official charged with protecting the public health of Americans to decide a pandemic is a risk he is willing to take.He covered-up a possible lab origin not just from the public but from the most senior White House national security officials.
How can Biden possibly keep as his presidential adviser someone who was willing to risk a pandemic to conduct gain-of-function research?Research deemed so risky the Obama admin hit pause on it in 2014 before Fauci lifted that quietly in 2017.Unacceptable.
And here’s @K_G_Andersen’s response

Kristian G. Andersen
@K_G_Andersen
·
Jun 2
I know it's super mundane, but it isn't actually a "massive cover-up" Sharri. It's just science. Boring, I know, but it's quite a helpful thing to have in times of uncertainty.
Quote Tweet

Sharri Markson
@SharriMarkson
· Jun 1
Scientist Kristian Anderson told Fauci SARS-CoV-2 has “unusual features” that “potentially look engineered”. Not long after this email, the scientists authored a piece insisting the virus was natural and Fauci said the same publicly. This is a massive cover-up.

"Just science?" Those are words that could come back to haunt Andersen. Or bite him in the ass. Marina Medvin understands:

This level of medical deceit to effectuate political control is unprecedented in American history.#FauciEmails

And while a ton of credit goes to Rand Paul, "firing" doesn't seem to fit the case, considering the enormity of what has gone down:

Finally--Never Forget. Never forget that this came in the wake of four solid years of Deep State, DC Establishment, Global Elite, and complicit Media generated hoaxes and disinformation campaigns. Of determined efforts to overthrow the elected president of the US and institute the Great Reset, culminating in a hoax election.