Yes, for you Latinists, I know the original, re Carthage, runs a bit differently--but this will do.

Everybody's talking about the Trade War with China, but that's only half of the story. Just like WW2, American is engaged in a Two Ocean War. If you listen to the news about how China's economy is tanking under Trump's pressure, you may also hear a second story line: Germany's economy is also struggling to stay above water.

Germany first became a problem for Europe and the world in 1870, although I suppose you could trace it all back to the French Revolution. In a sense you could say that there's been a Great European War ongoing since 1870, and that WW1 and WW2 were simply inflection points. With the end of the Cold War and the reunification of Germany it looked like the German Empire had finally and definitively won that war--subjugating all of Europe, even Britain, to its iron will and its economic engine. Our post Cold War presidents acquiesced to the state of affairs, and turned the other cheek to German aggression.


Back in 2016 I told everyone who would listen that Trump was determined to break Germany. His rhetoric on German trade warfare coupled with security freeloading and ironfisted hegemony over the EU made that clear. Nor were Trump's intentions missed by the Europeans. This photo from May 30, 2017--remember? that was two weeks after the Deep State officially declared war on Trump, via Team Mueller--is captioned Trump blasts Merkel: A timeline of the face-off that threatens to change the world order:

That standoff continued into 2018. Here's that famous photo that CTH loves so well--and note that Trump's buddy Abe is right there, front and center, taking it all in. It's captioned, Angela Merkel berating Donald Trump at the 2018 G7 summit in Canada, but Trump looks more amused than anything else: 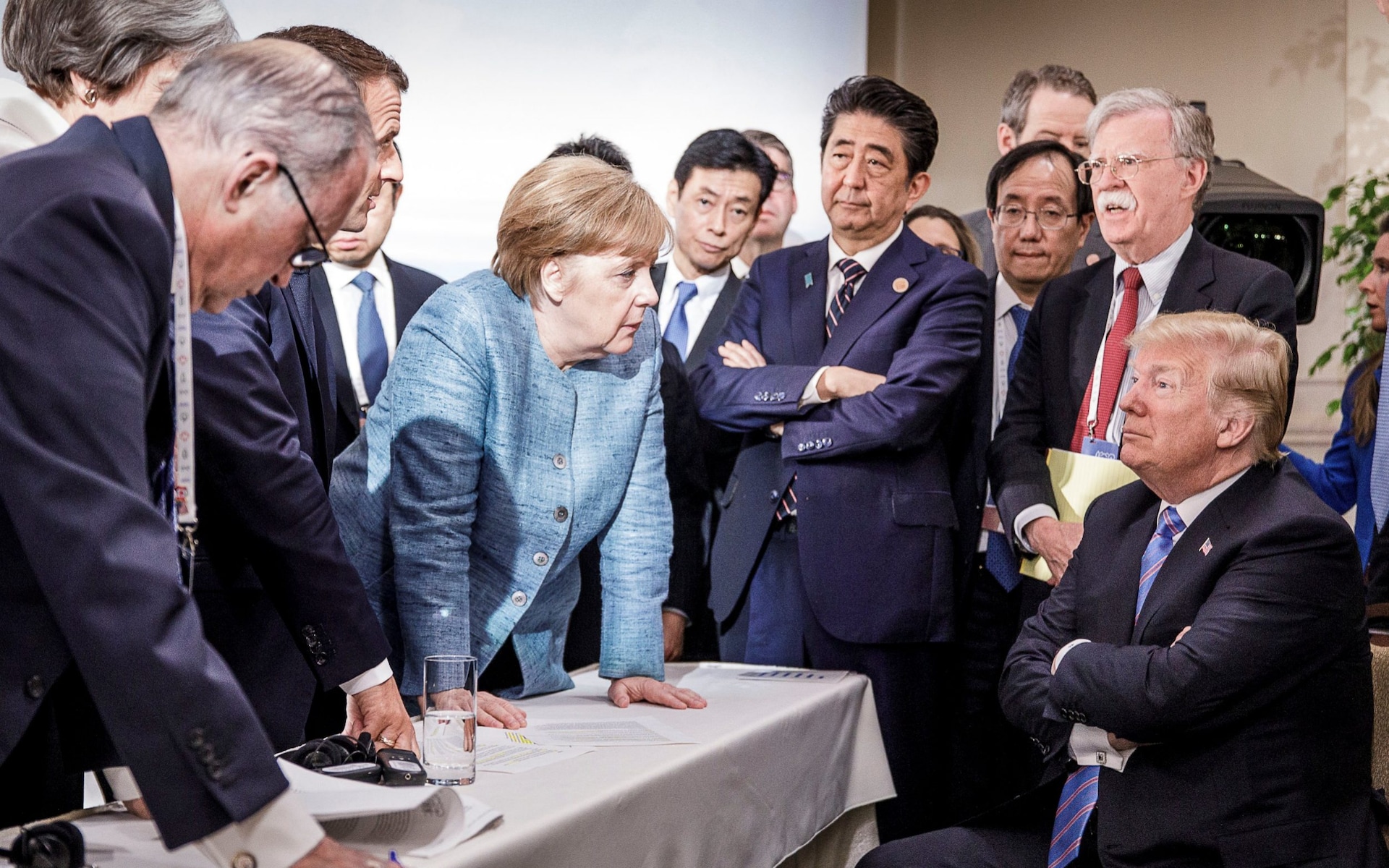 Trump has stayed the course, because this is central to everything he wanted to accomplish, and we're starting to see results. He has assiduously worked the EU countries. The recalcitrant May has been humiliatingly pushed out of office and it looks like Brexit will happen. Italy is cooperating in the Russia Hoax investigation, and Salvini has become a leader in the European struggle to throw off the German yoke and put a stop to the Merkel/Soros torrent of migration. The Danes just received a jolt from Trump, and in the meantime Trump will be visiting his good friends in Poland (Can Slovenes and Poles communicate? Melania may be doing some diplomacy of her own.). Poland has raised the issue of reparations from Germany again, and Trump may be moving US bases there.

Earlier this summer, when Russia Hoax news was a bit slow, I started work on a blog about all this. I've scaled it back, but here are some of my notes.

First, credit to Zerohedge--they've been following this story. This linked blog isn't really worth reading--it's shallow, but the title tells the story:

May Is Just A Pawn - Trump's Real Target Is Merkel

However, my go to Italian commentator, Antonio Socci has some good blogs, from an Italian perspective. I've translated some excerpts. This one, from July 4, 2018, was prescient. Socci saw what was coming, and he demonstrates a better understanding of Trump than virtually anyone in the US. Trump knows geopolitics:

HUGE MUST READ: WHAT IS HIDING BEHIND THE TRADE WAR BETWEEN THE USA AND THE EUROPEAN UNION

The "economic war" that has broken out between the Unites States and the European Union is much more than a controversy caused by the unprecedented German trade surplus. Much more than a question of tariffs, it's the return of history.

In fact, Germany, which is certainly a great country, has once again become a big problem. Not only for Europe, but also for the United States. And Trump has every intention of winning the tug of war with Merkel, scaling back Germany's imperial designs (Brexit has already gone in this direction: Britain is historically hostile to continental powers).

Germany will lose the confrontation with the US, which could also prove to be a harsh blow for the entire current European Union of Maastricht.

The laws of geopolitics are inexorable and nations that seek continental supremacy, like Germany, should learn from the mistakes of the past.


Then this summer another story that's been simmering for years bubbled to the surface--don't lose track of this one:

How Deutsche Bank could turn into another Lehman Brothers

Stock enthusiasts would be wise to keep a close watch on what is happening at Deutsche Bank, which shook up its business and said it planned to lay off thousands of traders and other workers.

One of Deutsche Bank’s main problems has been the derivatives it holds. Derivatives are just what the word implies — they are securities derived from other securities, and they are very complicated.

But the important fact to remember is that Deutsche Bank traded these derivatives with other financial firms. So, is this going to be another Lehman Brothers situation whereby one bank’s problems becomes other banks’ problems?

Pay close attention to this.

If the situation gets out of hand, the Federal Reserve and other central banks will have no choice but to cut interest rates even if it’s not the best thing for the world economies.

Deutsche Bank is the most important bank in all of Europe, it has 49 trillion dollars in exposure to derivatives, and most of the largest “too big to fail banks” in the United States have very deep financial connections to the bank.  In other words, the global financial system simply cannot afford for Deutsche Bank to fail, and right now it is literally melting down right in front of our eyes.  For years I have been warning that this day would come, and even though it has been hit by scandal after scandal, somehow Deutsche Bank was able to survive until now.  But after what we have witnessed in recent days, many now believe that the end is near for Deutsche Bank.  On July 7th, they really shook up investors all over the globe when they laid off 18,000 employees and announced that they would be completely exiting their global equities trading business…

GERMANY IS THE PROBLEM AGAIN

If we consider the reality of things we have to recognize that in Europe there is a problem: put bluntly, that problem is Germany. That is especially the case today when the Germans have taken over the leadership of the European Commission themselves.

The other European countries are afraid to confront the hegemonic power. But that's how problems grow worse. ...

The more we fail to understand the "Germany problem" ... the worse it will be. History and geopolitics teach.

Today the American president, Trump, is the only one talking about it. In a recent issue of "Limes" [An Italian journal of geopolitics] an essay by Theodore R. Bromund of the Margaret Thatcher Center for Freedom (Heritage Foundation) was released. The title says it all: "America and Europe have the same problem: Germany".

The summary adds: "In Washington's eyes, Berlin has returned to being too powerful, thinking it can do without the US and flirting with their enemies. The EU as the primary vehicle for imposing Germany's naive, selfish, mercantile and pacifist vision. The irremediable divergence between the respective interests”.

Obviously the US defends its interests. But - as Bromund writes - it is undeniable that throughout the twentieth century the fundamental problem of Europe "which brought it to destruction" was "the strength of Germany"; it is known that after 1945 various remedies were sought ("the simplest one was the division of Germany into two states ") and it is evident that today "all the devices designed to contain Germany have fallen, faded or become vehicles of German power".

For example, "the European Union, founded to curb German power, has become the primary means by which its economic component is exercised - so irresponsibly here" (as Margaret Thatcher feared).

Therefore, explains Bromund, the current clash between the US and Germany is not something Trump discovered, but is "the reflection of a basic geopolitical problem".


So, while watching China, keep an eye on Germany, too. Trump is up to a lot more than just managing the Russia Hoax. But the Russia Hoax may well be understood as the Deep State's last ditch effort to thwart Trump's geopolitical goals.

UPDATE: CTH has a nice post up that relates directly to the above: President Trump and Prime Minister Boris Johnson Discuss “Big Trade Deal”… Merkel isn't mentioned a single time, and Germany is referred to only once, yet that's what the post is largely about--and China, of course. Teaser quotes:

For the past 30 years the U.S. was a sucker to keep letting the process remain in place while we lost our manufacturing base to overseas incentives. The investment process from Wall Street (removal of Glass-Stegal) only made the process much more severe and faster.

 Fast forward to 2017 through today, and President Trump is now engaged in a massive and multidimensional effort to re-balance the entire global wealth dynamic.

Unfortunately, putting ‘America First’ is now also against the interests of the U.S. multinationals on Wall Street; so President Trump has to fight adverse economic opponents on multiple fronts…. and their purchased mercenary army we know as DC politicians.

No-one, ever, could take on all these interests. Think about it… The EU, Asia, World Bank, International Monetary Fund, China, Russia, U.S. Chamber of Commerce, the World Bank, Iran, U.S. Congress, Wall Street, the Big Club, Lobbyists, Hollywood, Corporate Media (foreign and domestic), and the ankle-biters in Never Trump…. All of these financial interests are aligned against Main Street USA and against President Trump.

Name one individual who could take them on simultaneously and still be winning, bigly.


Trump made no secret before the election that this was his aim. Once he was elected he moved immediately. And so did the Deep State.