Catherine Herridge has a twitter thread in which she provides images of two internal FBI email exchanges early in the work day of January 4, 2017. Those email exchanges involve Peter Strzok, Lisa Page, and James A. Baker. First, here is an image of the emails: 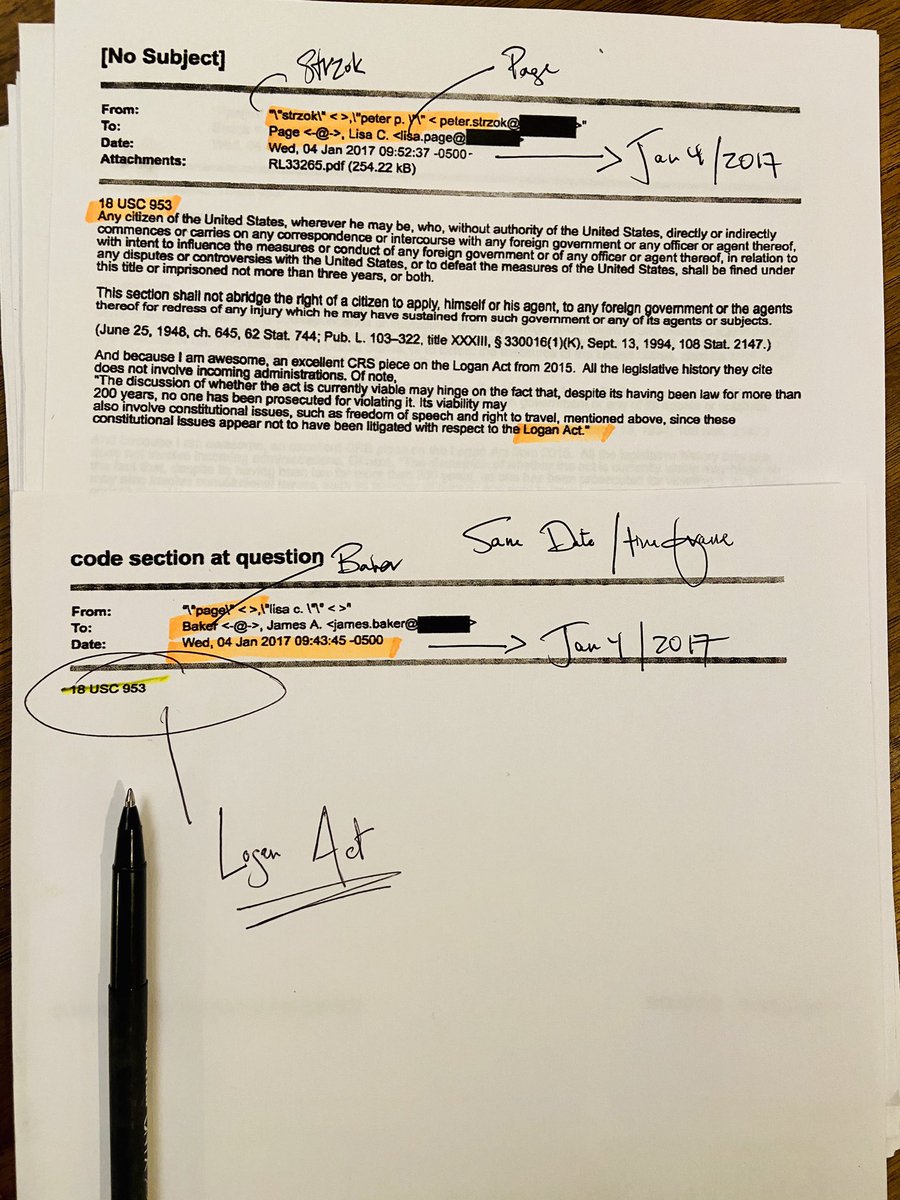 Now, bear in mind that James A. Baker was at the time the top legal guy at the FBI--he was General Counsel, which means that he was disgraced former FBI Director James Comey's personal lawyer for official purposes. Lisa Page's exact position in the organizational pecking order is a bit more ambiguous, but as Counsel to the Deputy Director, Andy McCabe--who was in charge of day to day operations--she would ipso facto have a lot of clout.

The first email is from Lisa Page to James Baker, and is captioned: "code section at question." I wonder whether Page means "code section IN question"? The entire text of the email is simply the United States Code citation to the Logan Act: "18 USC 953".

How did they come up with this Logan Act business? Apparently not from Sally Yates or anyone else at DoJ. We discussed this entire context not long ago in The Plot Against Flynn Traced To The Oval Office. Here are two very relevant passages:

Andy McCarthy has a must-read article up this morning: Flynn and the Anatomy of a Political Narrative--a title which, in a sense, doesn't do justice to what McCarthy does in his article. McCarthy draws on newly revealed testimony as well as--crucially--information drawn from a NYT article that came out shortly after Flynn's resignation. By putting these sources together what emerges is a picture of Obama himself at the center of a conspiratorial web targeting the Trump administration through the framing of Flynn. ...

Where did the idea of using the Logan Act come from? Not from DoJ, which would have had to approve a prosecution. McCarthy quotes McCord's view that it actually originated in the office of disgraced former DNI James Clapper:

McCarthy puts that together with more from the NYT article that tells us a lot about who the key plotters were:

For the legal analysis of Flynn’s exchanges with Kislyak, the president’s aides [again, probably to be read, Rice or someone deputed by her] consulted the FBI, not DOJ:

The Obama officials asked the F.B.I. if a quid pro quo had been discussed on the call, and the answer came back no, according to one of the officials, who like others asked not to be named discussing delicate communications. The topic of sanctions came up, they were told, but there was no deal.

No misconduct, which means: no evidence of a crime, no predication, and therefore, no investigation may legally be conducted. No interview of Flynn, because that's an investigative step. In other words, if this plot to frame Flynn and damage or even remove Trump were being run "by the book", it would all have been dropped right then and there with the knowledge that Flynn's actions were those that were "by the book." But Comey was never one to do things "by the book," as the "dumbfounded" Yates discovered when Comey went ahead and dispatched Strzok and Pientka to interview Flynn against her wishes.
Here's a final takeaway from this. It would appear to be very much in the interests of Yates and McCord to cooperate with John Durham, to separate themselves to the greatest degree possible from the plot to screw Flynn. And when I say "cooperate" I mean "cooperate fully," because once you start cooperating there's no drawing lines. Not here, anyway, where Yates and McCord would be in no position to draw any lines with Durham.

I think this gives us an idea of what was behind Page's email to Baker at 09:43:45. Somebody, whether Bob Litt at ODNI or someone at the NSC, had got in touch with the FBI (McCabe? Because this seems to start with McCabe's counsel, Page) and told them to bone up on the Logan Act in preparation for the Oval Office meeting the next day. Since Baker will be the one briefing Comey, Page emails Baker regarding the Logan Act.

The next step that we see, however, is a lengthier email from Strzok to Page just a few minutes later, at 09:52:37. It has no caption, but it's all about the Logan Act. That must mean that Page, as soon as she had emailed Baker, immediately contacted Strzok (text? phone?) to tell him what was up.

In less than ten minutes Strzok emails Page providing the text of the Logan Act as well as a precis of an article on the statute gleaned from the Congressional Research Service (CRS). Strzok does two things:

1) He points out that nothing in CRS suggests that the Logan Act could apply to an incoming administration, and

2) He quotes a passage from CRS which points out all the constitutional problems with the Logan Act. Among other things, CRS correctly notes that no one has ever actually been prosecuted under the Logan Act--not just never convicted, but never prosecuted. The very few attempts were dropped before things ever got to a trial--wiser heads having prevailed.


We presume, therefore that James Baker did his homework and came to the same conclusions that Strzok pointed out as emerging from the CRS presentation: That the Logan Act certainly doesn't apply to an incoming administration and may not apply to anyone, due to its well known constitutional infirmities. To proceed against Flynn on the basis of the Logan Act would be a very risky undertaking, both legally and politically. Thus when Obama takes Comey and Sally Yates aside the next day, at the Oval Office meeting, and the topic of the Logan Act is raised, Comey--who, whatever else you may say about him is not a stupid lawyer--responds forthrightly that the Flynn - Kislyak calls "appear legit."

If Comey had been smarter politically he would have said to himself, Whoa, I cannot allow myself to get involved in a plot with knuckleheads raising a Logan Act issue! But he went ahead when he saw that's what Obama and the Deep State--probably including several GOP senators--clearly wanted. He tried, in effect, to finesse the matter by pretending that the contact with Flynn was pure routine, while hoping to find some false statement in Flynn's answers that could somehow be put to use.

The rest is history, but the fallout from it is still not complete.