The Structure Of The Deep State

Prompted by comments from Titan 28 and Joe, I offer a sort of organization chart of the Deep State, as well as some interesting tweets from Greg Rubini which, effectively, illustrate how that organization chart expands beyond the halls of government. In particular, what's important to take away from this is the web of interlocking supervision and control that we see, a web that any president will be hard pressed to handle.

Here's just one example. The FBI is a key part of the Deep State. It's one of the member agencies of the Intelligence Community, and the lead counterintelligence (CI) agency. As such, it is supervised by the Director of National Intelligence (DNI), who is a cabinet level appointee who reports to the President. At the same time, the FBI is an agency of the Department of Justice, and the FBI Director reports not just to the DNI but to the Deputy AG. As such, the FBI is the federal government's lead law enforcement agency--a role which is fully compatible with its CI role, despite what you may hear to the contrary.

Does this give some idea of the complex web I referred to? The AG, for example, may not be a formal member of the IC, but the crucial role of the FBI in CI means that the DNI cannot afford to ignore DoJ. After all, the FBI may end up investigating other IC members and and answering in that regard to the AG!

And that's just one partial example.

So, who are members of the IC, and therefore at the center of the Deep State? Wikipedia can provide us with a handy list:


Notice that all these agencies fall under a Department--all except the CIA, which is an "independent agency". What's that, you ask? If you follow the link, above, you'll find that Wikipedia has an answer for that, too:


Independent agencies of the United States federal government are agencies that exist outside the federal executive departments (those headed by a Cabinet secretary) and the Executive Office of the President.[1] In a narrower sense, the term may also be used to describe agencies that, while constitutionally managed by the executive branch, are independent of presidential control, usually because the president's power to dismiss the agency head or a member is limited.


Established through separate statutes passed by the Congress, each respective statutory grant of authority defines the goals the agency must work towards, as well as what substantive areas, if any, over which it may have the power of rulemaking. These agency rules (or regulations), when in force, have the power of federal law.


Once again, if you followed the link above, you'd get a list of these agencies, including such familiar entities beyond the IC and the CIA as: EPA, FTC, GSA, NASA, and on, and on, and on. How does all this fit within our constitutional order? Please, don't ask!

Imagine any president trying to ride herd over that alphabet soup of agencies, especially when their career bureaucrats are recalcitrant, or outright members of a Resistance!

And then there's the National Security Council. Check that out, to see who belongs, who attends regularly, etc. Some IC agency heads belong, others have department heads who attend and, presumably represent their interests--for example, the AG attends, so you can bet that the FBI Director wants to have some input into deliberations through the AG.

As if that weren't complicated enough, all these agencies undergo "oversight" by House and Senate committees--which means confirmations, budgets, priorities, etc. Can you say divided loyalties?

So this is what Trump is dealing with--or trying to. And it doesn't stop there. Check out this twitter feed by Greg Rubini. The Deep State doesn't stop where the boundaries of government agencies stop, because there's a revolving door of political appointees, whose careers in government span administrations.

By the way:
Christopher Steele is a good friend of Michael Hayden,fmr CIA & NSA Director (NeverTrumper).Hayden met Steele in London, in 2008.Hayden & Brennan are friends.Connect the Dots... 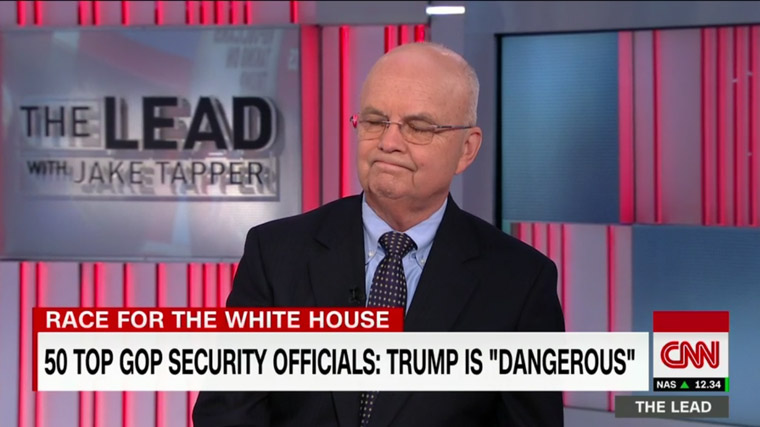 2. Hayden is a VERY important player in this WAR against Trump.(Spy Operations, Impeachment Hoax)VERY important.And he stays behind the scenes... 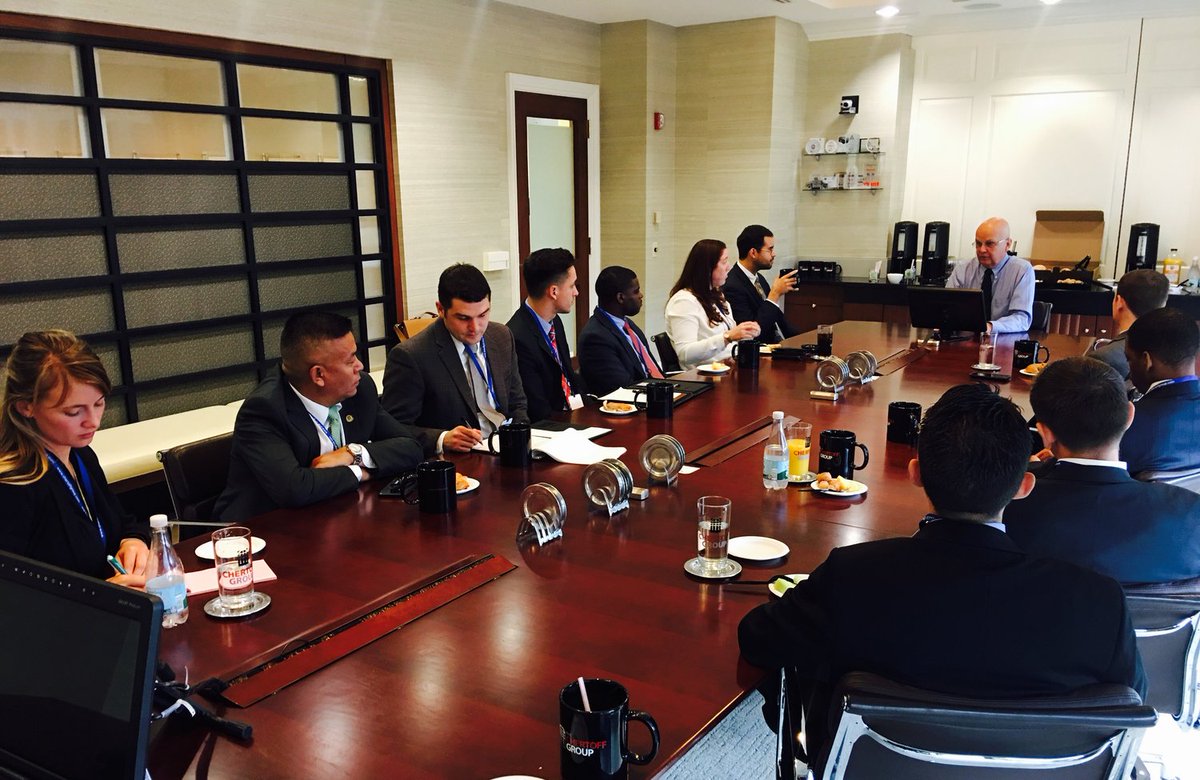 3. This is what John Brennan thinks of Michael Hayden:(from the RabidDoggg mouth): 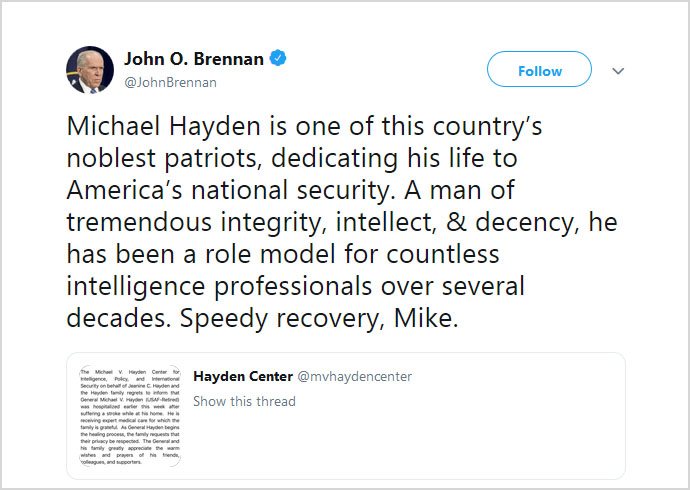 4. if you want to understand how important Hayden is,consider this:Michael Hayden was NSA Director from March 1999 to April 2005,during the Bill Clinton and George W. Bush Administrations,and CIA Director from May 2006 to February 2009.
5. That is 10 years at the Top Levels of the US Intelligence Agencies.
6. Hayden is the guy who DESTROYED the NSA, and transformed
the NSA into a MONSTER.
Ask the Hero - and fmr NSA Technical Director William Binney...correct, Dr. Dave Janda? @docdhj
7. Michael Hayden is the guy who started the ILLEGAL NSA spying
on American citizens.The guy who used the NSA against us.
8. Now re-read the whole Thread, and tell me:Between Hayden and Brennan, who do you think is calling the shots? 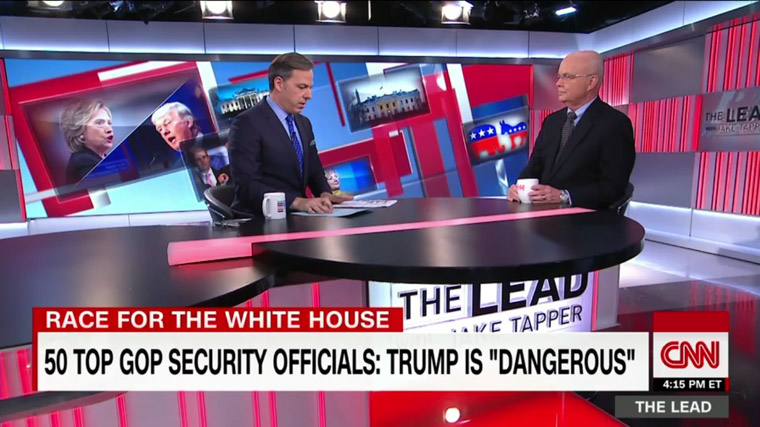 9. btw: the CNN interview of the screenshots at #1 and #8 was on
Aug 9, 2016What was going on, at that time?
10, I would like to tell Devin Nunes @DevinNunes, to Sen. Lindsay
Graham @LindseyGrahamSC, and to AG Willam Barr to keep an
eye on Hayden, not just on Brennan & Comey, and also on
Michael Chertoff and on Michael Morell (frm CIA Deputy Director)
Thank you 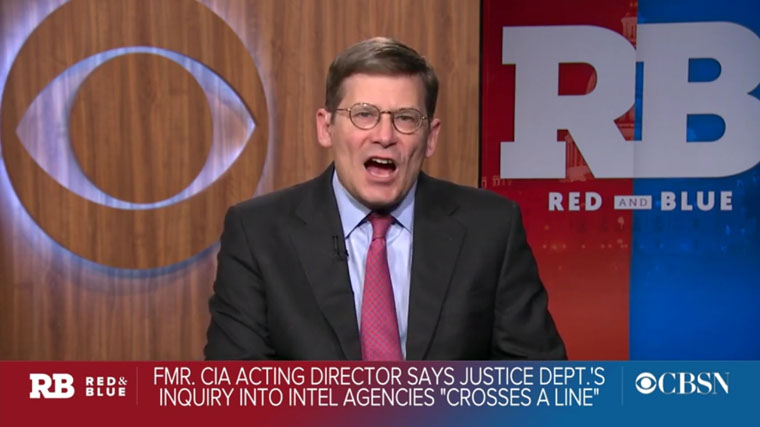 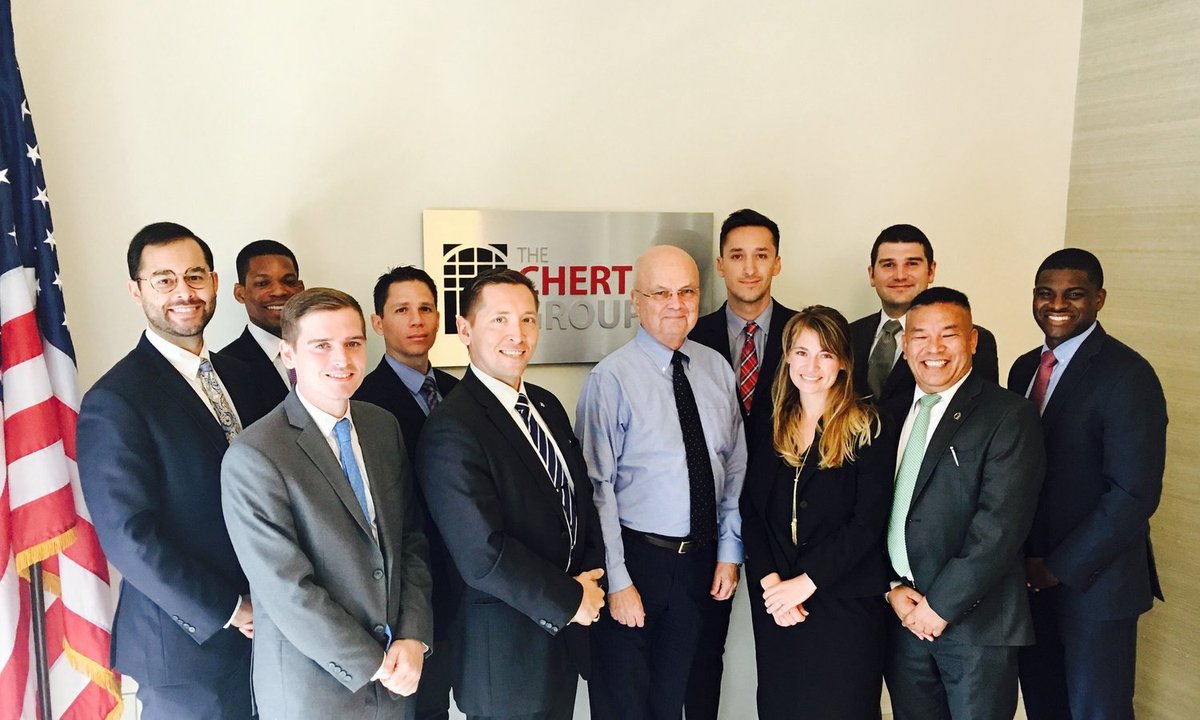