As we've become used to, Barr kicks the liberals to the curb.

Mueller didn't prove obstruction on his own theory, but

That theory was nonsense to begin with.

It was all Andrew Weissmann trying to somehow make the president look bad.

Good luck with that.

And I absolutely loved Barr's terse explanation why his friend "Bob" wasn't there--he's not the Attorney General.

Attorney General William Barr on Thursday corrected a reporter’s assertion that special counsel Robert Mueller’s report was “his,” reminding him that Mueller authored the report on behalf of the Justice Department.

“There’s a lot of public interest in the absence of the special counsel and members of this team. Was he invited to join you up on the podium? Why is he not here?” asked the New York Times’ Eric Lipton. “This is his report, obviously that you’re talking about today.”

“No it’s not,” Barr shot back. “It’s a report he did for me as the attorney general. He is required under the regulation to provide me with a confidential report. I’m here to discuss my response to that report and my decision to — entirely discretionary to me — to make it public since these reports are not supposed to be made public.”

The #obstruction statute DOES NOT EVEN APPLY to an #FBI investigation!

The only two courts that have addressed this issue have decided squarely AGAINST #Weissmann's bogus theory.


The point she's making is that Weissmann relies on 18 USC §1512 (c). Problem: That statute pertains to "officials proceedings." The two courts Powell refers to held that an FBI investigation isn't an "official proceeding" for purposes of the statute.

The title of Powell's book is Licensed To Lie. Appropriate when it was first written and still appropriate now.

UPDATE 3: From the report via this excellent post by law prof Glenn Reynolds--and this must really hurt the lunatic left. At the same time Team Mueller tries to smear Trump they have to admit to ... exemplary behavior on his part. Exemplary. Let that sink in Lefties and NeverTrumpkins:

... as the Special Counsel's report acknowledges, there is substantial evidence to show that the President was frustrated and angered by a sincere belief that the investigation was undermining his presidency, propelled by his political opponents, and fueled by illegal leaks. Nonetheless, the White House fully cooperated with the Special Counsel's investigation, providing unfettered access to campaign and White House documents, directing senior aides to testify freely, and asserting no privilege claims. And at the same time, the President took no act that in fact deprived the Special Counsel of the documents and witnesses necessary to complete his investigation. Apart from whether the acts were obstructive, this evidence of non-corrupt motives weighs heavily against any allegation that the President had a corrupt intent to obstruct the investigation."

... normal people should be pleased and relieved that there was no collusion, even as they should be angry that a huge chunk of our political class seriously maintained that the President of the United States was a Russian puppet. That claim, based more on a desire to undo the 2016 election than on any actual evidence, was a poisonous corruption of our political discourse, and those involved should be -- but won't be -- ashamed.


UPDATE 4: Will Chamberlain has a theory on how and why Barr became AG--it's all about obstruction: 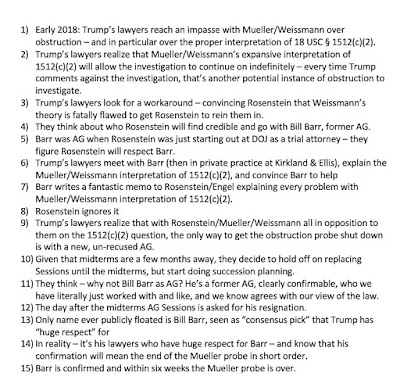