Here are links to two excellent reads. The first appears at Gateway Pundit and serves as an excellent summary to the Ukrainian Connection to the Russia Hoax--which, not surprisingly is very much a Soros connection as well: Ukrainian Lawmaker Admits in Recording That Government Agency Linked to Soros Was Helping Hillary Clinton in 2016 Election. The information is dense--it's the big picture information that's only now coming out--but here's a teaser excerpt:

The Ukraine Crisis Media Center was founded in March 2014 by the Ukraine government and George Soros’ International Renaissance Foundation to give reporting on the Ukraine conflict the ‘correct’ spin. Soros has founded media lobby groups all over the world modeled on Media Matters for American, which he founded with John Podesta after the Lewinsky scandal nearly brought down Bill Clinton.

Leshenko [sic] provided this info [so-called 'Black Ledger' pages linked to Manafort] to Clinton campaign staffer Alexandra Chalupa, as Epoch Times reports, who then passed this info on to Yahoo News reporter Michael Isikoff. Isikoff broke the story on Yahoo on Aug. 18, 2016, one of the first public mentions of purported “collusion with Russia” by the Trump team. Manafort had to step down as Trump’s campaign manager the next day.

Chalupa also passed the Black Ledger info on to Glenn Simpson at Fusion GPS, who passed them on to staffer Nellie Ohr. Ohr passed the info on to her husband Bruce Ohr, Epoch Times reports.  On May 30, 2016, Nellie Ohr sent an email to Bruce Ohr and Justice Department staffers under the subject line “Reported Trove of Documents on Ukrainian Party of Regions’ ‘Black Cashbox.’”

Bruce Ohr then used this Soros-derived info to begin the Justice Department surveillance of the Trump campaign code-named “Crossfire Hurricane”.

George Soros had invested billions in Ukraine before the conflict broke out 2014, and was one of the primary players in the conflict with his nemesis Vladimir Putin. “With his Open Society Foundations, Soros was not only instrumental in helping bring down the government in Kiev, he also stands to make a sizeable profit out of Ukraine, especially thanks to his close ties to the new Poroshenko government. In January of this year, he met privately several times with the Ukrainian leadership,” neopresse wrote in 2015.


The second article is a nice Don Surber take-down of the insufferable NeverTrump Peggy Noonan, who week after week writes ad hominem screeds against Trump behind the WSJ subscription wall. This week Noonan's screed amounts to a paean to the Establishment--the unelected people who Noonan thinks should be running the country. It's a fun read, but there's also a very serious point to it all: Noonan blames Trump for the attempted coup.

In the accompanying photo Noonan appears not to be wearing pearls, so she can't clutch them, but it still captures her distress nicely: 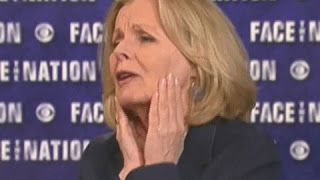 Noonan's unwitting self parody is amazing. Again, a teaser excerpt:

She wrote, "I’m thinking of the old ambassadors, mostly men in their 60s, 70s and 80s. They’re woven into the town, solid citizens, friends of journalists, occasionally sources, and they know things. They’re mostly retired, and at lunch at clubs in town often begin sentences with 'And so I told Zbig . . .' There’s a bit of lost glory with them, but they care about America, are personally invested in it, love it with an old-school love, and respect systems, knowing that creativity — in art, science and diplomacy — can only be born within a certain immediate order."

Zbig is Zbigniew Kazimierz Brzezinski, who advised LBJ and was Carter's national security adviser. On his watch, we doubled down on Vietnam (LBJ) and lost Iran and the Panama Canal under Carter.

But he made the cocktail circuit.

Noonan wrote, "Their fears about him weren’t assuaged by trusty old hands inside the White House because those hands weren’t there. They didn’t join the administration, because they didn’t want their résumés tainted

The message from DC is clear: work for The Donald and you end your career.

Hers is a roundabout way to blame President Trump for the attempted coup by the Deep State and the Fourth Estate, which awarded her a Pulitzer for her contributions to this effort.

... It was in this atmosphere that the Steele dossier, with its whacked out third-rate spy fiction, became believable, that sober-minded officials reportedly wondered if they should wear wires when they met with the president.

"He destabilized the entire town."

Gérard Araud ... the French ambassador to the United States ... told The Atlantic, "There is a misconception about Trump which is American and French: saying Trump is an accident, and when Trump leaves power, everything will go back to business as usual. That’s the dream of Washington, D.C."

That will not happen. The Old Washington failed. It gutted the Fly Over nation by replacing Americanism with globalism. This pleased all those sophisticated ambassadors at those trendy parties (and got deals in Ukraine for Biden's idiot son) but the Midwest and South were flattened.


"He destabilized the entire town," upset all the right thinking people, and brought poor Peggy's world crashing down.
Posted by mark wauck at 1:41 PM