The WSJ featured an article on Thursday by Marty Makary, a public health doctor at Johns Hopkins who has been heavily involved in tracking Covid cases:

We’ll Have Herd Immunity by April

Covid cases have dropped 77% in six weeks. Experts should level with the public about the good news.

The article seems not to be behind the usual WSJ paywall, so check it out. Here's my take from it.

It appears that if you read between the lines, Makary is basically presenting the views of immunological and virological experts such as Michael Yeadon and Sucharit Bhakdi (and others). Makary is careful to avoid transgressing the established orthodoxy by suggesting that there isn't actually any real point in mass, coerced vaxxing. However, that is the logical conclusion of most of the data that he presents.

Here's the chart in which he presents that 77% drop in "cases" in the last six weeks--and please note that he doesn't discuss the fraught issue of how to determine what a "case" actually is. However, he does stipulate:

the consistent and rapid decline in daily cases since Jan. 8 can be explained only by natural immunity. Behavior didn’t suddenly improve over the holidays; Americans traveled more over Christmas than they had since March. Vaccines also don’t explain the steep decline in January. Vaccination rates were low and they take weeks to kick in. 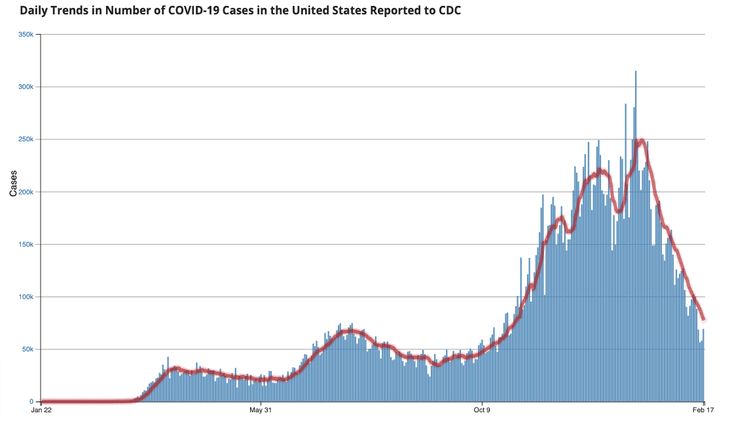 The key phrase is "natural immunity." That's what experts like Yeadon and Bhakdi have been talking about, and that's what Makary will go on to discuss.

You'll recall that, early on, we were told that the only way to develop immunity to the new coronavirus was to develop "antibodies." Brace yourselves--it turns out that's not exactly true. We, or those who were paying attention, learned about T-Cell immunity--a phenomenon that is well known to researchers but was being concealed from the public.

Here's the thing about T-Cell immunity--it can be acquired "analogically" and it lasts for a long, long time. When I say "analogically" think of milk maids who were constantly exposed to cowpox and therefore developed immunity to the different, but very deadly, human disease of smallpox. Similarly, humans are constantly exposed to the common cold coronaviruses develop T-Cell immunity to coronaviruses of all sorts--not just to the coronaviruses that causes the common cold, including Covid. This is what Makary is talking about when he uses the term "natural immunity".

Stated succinctly, the prevalence of T-Cell immunity due to the prevalence of coronaviruses in the global human population means that Covid will spread widely but will only affect extremely susceptible people--those with compromised immune systems and serious co-morbidities. Many people will exhibit no symptoms at all from their exposure to Covid, which is to be expected--at any given time we are all exposed to viruses. Others will experience this new coronavirus as similar to the other coronaviruses that are endemic in human populations, but not serious. Here's Makary talking about this:

There is reason to think the country is racing toward an extremely low level of infection. As more people have been infected, most of whom have mild or no symptoms, there are fewer Americans left to be infected. At the current trajectory, I expect Covid will be mostly gone by April, allowing Americans to resume normal life.

Note that Makary says we will be allowed to live normally after April. What he doesn't explain is why we should have ravaged human life in America for the past year. Does he really think that was a scientific and medical necessity, or is he toeing the current public health line to avoid being canceled?

Researchers at Sweden’s Karolinska Institute found that the percentage of people mounting a T-cell response after mild or asymptomatic Covid-19 infection consistently exceeded the percentage with detectable antibodies. T-cell immunity was even present in people who were exposed to infected family members but never developed symptoms. A group of U.K. scientists in September pointed out that the medical community may be under-appreciating the prevalence of immunity from activated T-cells.

Covid-19 deaths in the U.S. would also suggest much broader immunity than recognized. About 1 in 600 Americans has died of Covid-19, which translates to a population fatality rate of about 0.15%. The Covid-19 infection fatality rate is about 0.23%. These numbers indicate that roughly two-thirds of the U.S. population has had the infection.

In my own conversations with medical experts, I have noticed that they too often dismiss natural immunity, arguing that we don’t have data. The data certainly doesn’t fit the classic randomized-controlled-trial model of the old-guard medical establishment. There’s no control group. But the observational data is compelling.

Michael Yeadon, speaking from the UK, expressed shock that in government panels on Covid response there were no experts in immunology. In other words, among the various "experts" there were no experts who could speak authoritatively about how immunity to a virus is developed and, therefore, how this new coronavirus should be handled. These experts dismissed what they didn't understand. It's precisely this mechanism of "natural immunity"--T-Cell immunity, which is well understood on a scientific level--that makes the notion of vaxxing entire populations so questionable, as Yeadon, Bhakdi, and others have argued. Makary isn't about to go there, but he hints at this problem of the politicization of Covid policy:

Many experts, along with politicians and journalists, are afraid to talk about herd immunity. The term has political overtones because some suggested the U.S. simply let Covid rip to achieve herd immunity. That was a reckless idea. But herd immunity is the inevitable result of viral spread and vaccination.

Note that I didn't bold "vaccination" as being central to "herd immunity". That's because the whole question of vaccine effectiveness is so questionable with regard to this class of viruses. But the real point is that when Makary speaks here of "herd immunity" what he--and Yeadon and Bhakdi and other experts--mean is "natural" T-Cell immunity. What they all recognize is that when Covid broke out from Wuhan it was not being loosed on a "virgin" population without immunity--as we were led to believe. It was being loosed on a population with broad "natural" immunity. The resultant hysteria was artificially ginned up for non-scientific reasons.

All of the above is obviously good news. It's the non-scientific reasons that bring us to the bad news. We're all aware of the political reasons. However, just yesterday American Thinker ran an excellent article that goes into all the reasons why Big Pharma would be very much in favor of Covid fear and loathing. There's big money in this:

Yes, they [our "National health leaders] were feverishly working on a vaccine. But why were they not as frantically looking for a cure or treatment? And why were they continuous knocking down every possible treatment that was suggested?

She then goes on to document the close--and lucrative--connections between CDC, NIH (think: Anthony Fauci) and Big Pharma. It's the old, old story of government "regulatory" agencies being "captured" by the very industries they're supposed to be "regulating". It suggests why most major industries welcome government regulation: it provides tangible benefits by solidifying their business dominance against newcomers and competitors. It also provides profit in the form of subsidies.

During the fiscal years of 2014 through 2018, the CDC Foundation received $79.6 million from companies like Pfizer, Biogen, and Merck. Since it was created in 1996, the nonprofit organization has accepted 161 million from corporations.

An article published by Science Magazine In 2018 states that the FNIH filed a donation with the Internal Revenue Service for 19.1 million. According to the magazine the filing does not name the donor, but FNIH told Science it was the Bill & Melinda Gates Foundation in Seattle, Washington.

The vaccine companies and the Bill and Melinda Gates Foundation have come out with several vaccines and stand to make a lot of money from it. It turns out that the U.S. government pledged more than $9 billion to five U.S. pharma companies and $1.95 billion to Pfizer alone. But these companies only receive the money when the vaccine is competed.

Now not only will they receive the $9 billion, they will all receive the revenue from the distribution and sales. If you estimate that each vaccine dose will cost around 100 dollars and a billion people worldwide take it, that’s a hundred billion dollar market. It’s also important to point out that this is not a one-time vaccine. It looks like it will be a yearly vaccine with a booster, multiplying the profits.

That got me thinking about the potential cures that have already been looked at and disregarded by the medical community.

She goes on to document just how cheap some of those potential cures actually are. Which leads to her concluding observation:

So, what does this have to do with the CDC, the NIH, the pharmaceutical companies, and the Gates Foundation? They have all invested a lot in the production and success of COVID vaccines. Billions ride on its successful completion and administration around the world. And let’s not forget that Pfizer and the Bill and Melinda Gates Foundations are major donors for the CDC and NIH. If effective prophylactics and therapies tame Covid and drastically reduce the death toll, there would be less demand for the vaccine. I wonder if Pfizer and the Gates Foundation would still be willing to donate if the CDC and NIH were funding studies and promoting the use of these cheap, generic drugs as an alternative to vaccines?

Good question. So, the bad news is this: Covid may have been tamed by "natural immunity", as experts have persuasively argued, but who will tame the administrative state in which regulatory agencies are captives of the industries they regulate? Will the politicians who accept campaign contributions from those industries be up to that task? American ain't ready for that kind of reform. All this is just one glimpse among many that are possible of how corrupt our entire system has become, and how little relationship it bears to the constitutional order that we suppose still endures. Don't hold your breath for the Zhou Baiden regime to address any of this--its members are all in line with their hands outstretched.