UPDATED: You Shouldn't Oughta Testify For The Defense ...

Anyone who has followed the Russia Hoax at all, and the shenanigans of Team Mueller in particular, will be familiar with the name Andrew Weissman and the with charges of unethical conduct that have been leveled against him throughout his career. I refer to some of that background in Why Andrew Weissman? An excellent account of his actions in the Enron Case--unanimously overturned by the SCOTUS--can be found in Licensed to Lie, by Sidney Powell. Margot Cleveland, who writes regularly for The Federalist, has been working to unearth documentary evidence of Weissmann's misconduct in that case, and today she struck paydirt. As I remarked to a friend, I can't imagine any agent engaging in this kind of conduct unless directed to do so by a prosecutor. Which is in no way an excuse. And yet Weissmann has remained untouched through it all, and today is gunning for the POTUS. Robert Mueller knew exactly the kind of guy he needed to help him bring down a POTUS, and Weissmann fit the bill:

We filed a motion to unseal Weissmann's wrongdoing in the Enron cases. Newly unsealed: the affidavit from an Enron employee's lawyer describing "threats" from the FBI if his client testified for the defense. Great work from @FultonforTexas and @ProfMJCleveland More to come. 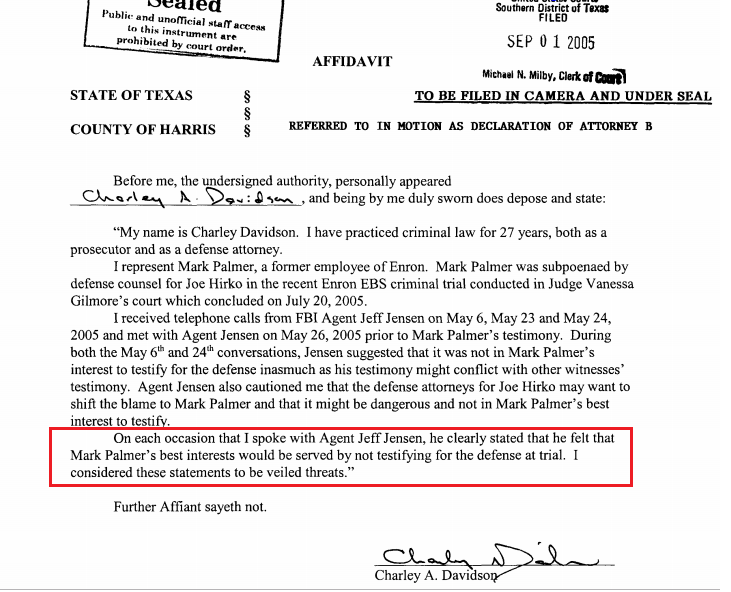 
UPDATE: Margot Cleveland has an article up at The Federalist that goes into more detail regarding Andrew Weissmann's "inappropriate" conduct in the Enron case (really a complex of several related cases): Explosive New Documents Reveal Andrew Weissmann’s Misconduct In Enron Case. Among other things, the article details Weissmann's "inappropriate" efforts to force a defense attorney off one of the cases and interfere in an attorney-client relationship--the defense attorney had previously embarrassed Weissmann by winning an acquittal against Weissmann. Weissmann sent an email to a co-attorney for a cooperating witness whom the first attorney was also representing. In the email Weissmann accused the other defense attorney of having a "conflict of interest"--because the attorney in question had been seen speaking with another defense attorney (there were multiple defendants)! Weissmann stated that the cooperating witness had two alternatives:

“instruct[] his lawyers who they can speak to and who they cannot; ... determine[] that his attorney has not acted in [the cooperating witness'] best interests and get[] rid of him.”


The attorney in question treated Weissmann's email as a veiled threat. Cleveland notes:

the court refused to find “the email was an improper threat.” Nonetheless, a federal appellate court noted that “Weissmann would have done well to have brought the issue to the court’s attention instead of emailing Rice’s lawyer.”


So, pushing the envelope right to the edge, inappropriate behavior just skirting sanctions. It's an illustration of how far federal judges may be willing to bend when faced with the full weight of the DoJ, to look the other way in the face of "inappropriate" conduct by the Director of a major DoJ Task Force that was constantly in the national news.

Cleveland further cites a report by an expert witness concerning what appeared to be the misuse of multiple grand juries for inappropriate purposes--intimidation of possible defendants and witnesses:

Especially troubling to [the expert witness] was the Enron Task Force’s use of “multiple grand juries working over several years” not to “return fresh indictments or start new cases, but to make the threat of indictment real and tangible” to the nearly 90 unindicted co-conspirators. In its reply to my motion to unseal the documents, the Department of Justice downplays these facts, by stressing that the Fifth Circuit held that the Enron Task Force’s conduct did not violate the defendants’ constitutional rights. In fact, the DOJ spent nearly one-third of the approximate 30-page brief defending Weissmann’s conduct even though that discussion was entirely irrelevant to the question of whether the documents should be unsealed—something the DOJ agreed was appropriate.

In any event, although it is true that Weissmann’s conduct in the Enron case did not reach the level of a constitutional violation, that doesn’t mean it was appropriate. Nor was Weissmann’s disconcerting behavior isolated: Weissmann has demonstrated a “reckless win-until-reverse modus operandi that has destroyed countless lives. Weissmann’s tactics sent four Merrill Lynch executives to prison, until a federal appellate court overturned their convictions and freed the men—but not before upending their lives.”