Is "Overreaction" Good And Necessary?

Another similarly paradoxical way to put that question would be to ask: When is overreaction not an overreaction?

That's the issue that Nassim Nicholas Taleb explores (I got this via Steve Sailer, Taleb on Why Panic Is Good). Taleb argues that what may rationally appear to be a strictly irrational--panicked--response to a risk may, on closer examination, turn out to be a quite rational precaution. Thus the title of his brief essay--The Ethics of Precaution: Why you are harming others by not "overreacting."  Here it is: 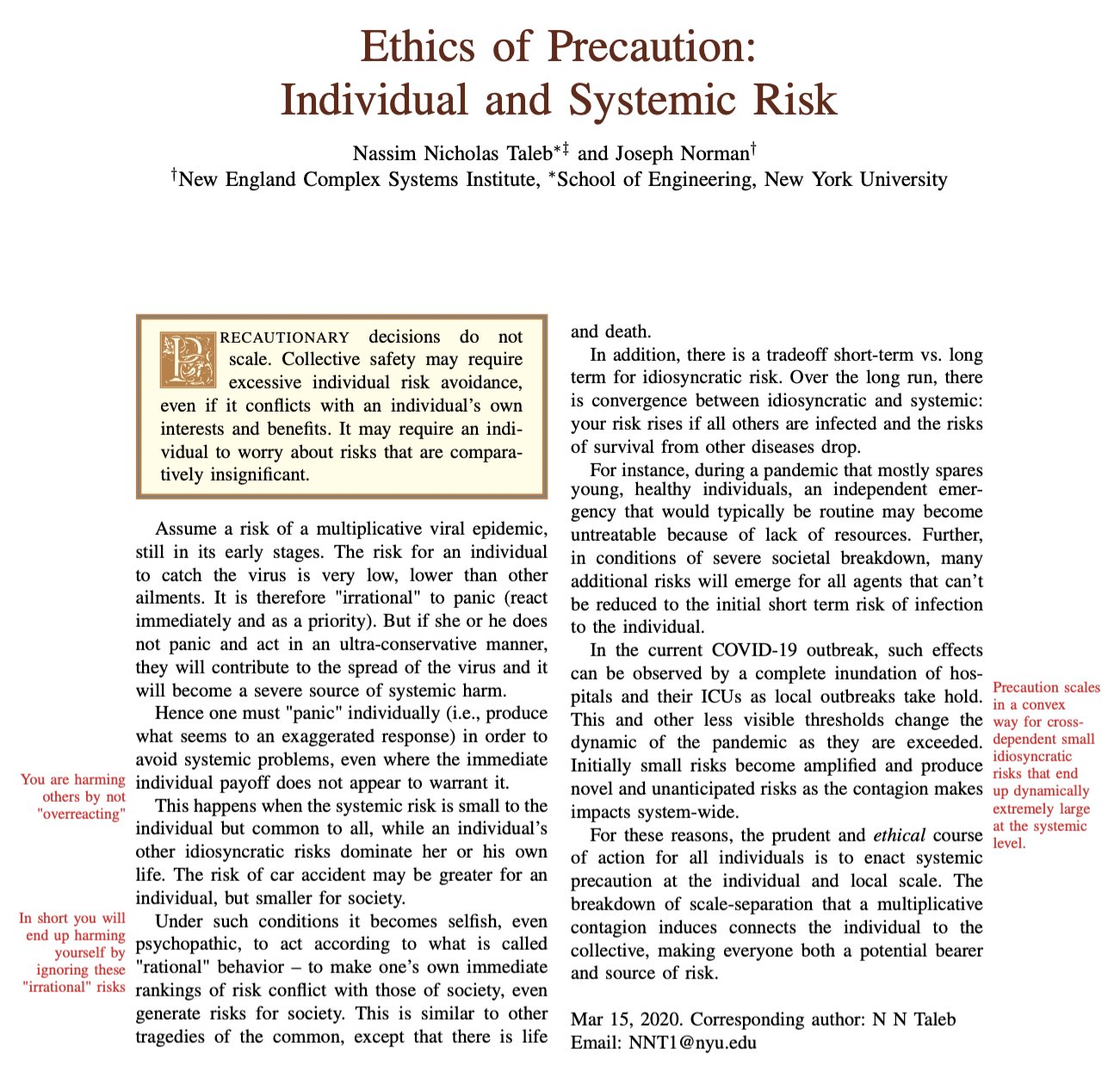 And speaking of precautions, at The Federalist today Ben Weingarten reports that the Trump Admin Dresses Down Chinese Ambassador About Wuhan Virus Lies. Among other things, he writes:


This escalation by the Trump administration followed growing efforts in recent weeks by Chinese officials and state-run media entities to delink the virus from China, obfuscate, and blame-shift about a global pandemic that originated on its shores, spread in no small part due to a Chernobyl-like response from its leaders, and for which it still has neither provided an accounting for the virus’s origin, nor allowed independent authorities to investigate it.

It must be seen as part of a growing, pivotal effort by the Trump administration State Department, along with among the Department of Justice and others, to engage in the information sphere against a CCP that has taken advantage of our open society, while preventing us from participating in theirs.

The Trump State Department has sought to openly and honestly discuss the totalitarian nature of the CCP regime, ...

Coronavirus should crystallize the reality of the danger Communist-ruled China poses to the U.S. national interest, the necessity of forthrightly countering it, and the revolutionary effort the Trump administration has undertaken to reorient the relationship by putting America First.


Don Surber, with some help from the NYT and CNBC, puts this in more pointed fashion--Follow the money. The virus did.

The New York Times reported last March, "For decades, Italy felt the brunt of the Chinese economic juggernaut that the United States argues poses a threat to the financial and political future of the West.

Red China was dumping cheap products to kill industries, thus Red China eventually has a  monopoly. Politicians and think-tank pundits cynically defend this as the free market. But Red China closes its market to foreigners.

CNBC reported last March, "Italy’s decision to be the first major European economy to join China’s massive investment and infrastructure project, the Belt and Road Initiative, can only exacerbate tensions between Italy and its neighbors."

The story also said, "China sees the BRI as a way to efficiently and easily export more of its goods to lucrative markets; its critics see the initiative as a vanity project that increases indebtedness among its participating countries. They also complain that the BRI gives Chinese companies unfettered access to other markets and economies, but that its own is still largely closed to foreign investment.