To my mind it seems very unusual that Flynn should change lawyers at this very late stage in the proceedings. I can't begin to say what's up. After all, Flynn was recommended no jail time and has vociferously maintained his guilt--under oath. I've always thought that Flynn was poorly served by his lawyers, Eric Holder's firm. Wait and see what develops.

NEW - General Flynn is getting new lawyers. Flynn "is terminating Covington & Burling LLP as his counsel and has already retained new counsel for this matter" Interesting development at this stage... 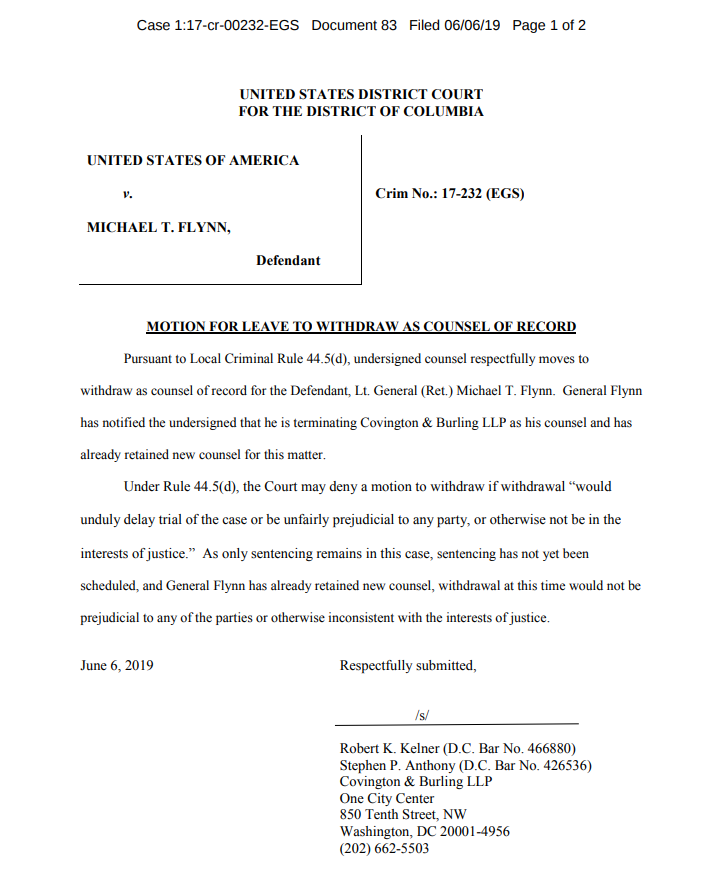 UPDATE 1: Jack Posobiec says he's been told that Flynn's new lawyer is very high profile, appears regularly on TV, name will be known to all of us.

Will Chamberlain predicts Flynn will withdraw guilty plea. That makes sense to me. In my last Flynn post I stated "God helps those who help themselves." Maybe Flynn has decided to help himself instead of knuckling under.

UPDATE 2: Techno Fog is now noting a Minute Order from earlier today in the Flynn case--he speculates, as he did the other day, that the transcripts may have been turned over to Judge Sullivan under seal (because of classification issues). To understand what Techno Fog is saying, note that the minute order from 6/4 says "the government is not required to file any additional materials or information on the public docket." The 6/6 minute order grants the governments motion to file documents under seal, i.e., NOT on the public docket.

With the information we have, can't be 100% certain the transcripts were produced to Judge Sullivan. (Leaning that way, however.) We'll see. Court Order below. The Motion for Leave to File Documents Under Seal isn't on public docket. 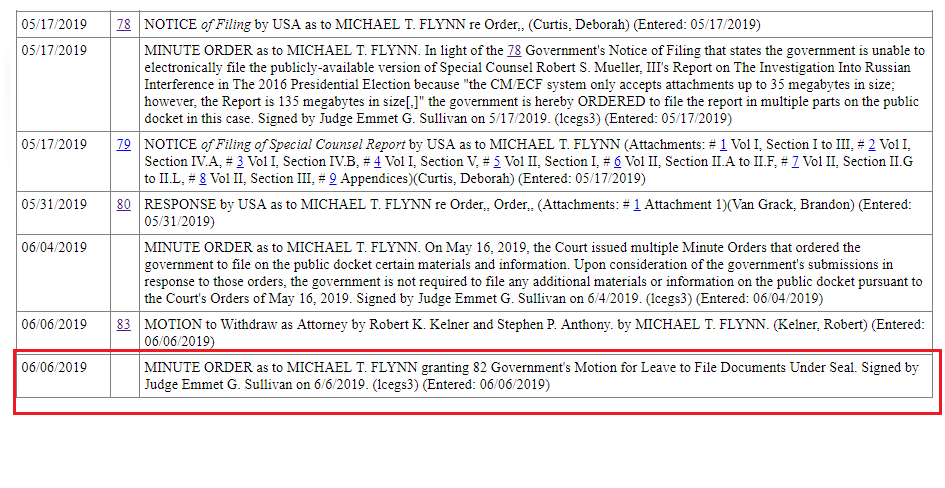 UPDATE 3: Of course, "not at liberty to discuss" doesn't necessarily mean, Yes.

In a text message to @POLITICO Rudy Giuliani said he was not Flynn’s new lawyer. Alan Dershowitz replied that he’s not representing Flynn. Joe DiGenova in an email wrote, “We are not at liberty to discuss.” https://politi.co/2IAOTKr  w/ @joshgerstein
11:06 AM - 6 Jun 2019

UPDATE 4: Very interesting point. In the write-up Flynn appears to be very forthcoming. Indeed, one wonders--why is he telling the FBI this stuff? Still, it's easy enough to see that if Flynn had multiple meetings with Russian and other diplomats, maybe he'd forget or mistake some details. The point, of course, is that they were looking to "get" Flynn.

Techno Fog‏ @Techno_Fog
Flynn "volunteering" info that he and Kushner had a "sensitive meeting" w/ the Russian Ambassador at Trump Tower is significant -- It may show why Strzok thought he was telling the truth: because he was volunteering - and not hiding - the extent of his contacts w/ the Russians.