Despite the fact that Judge Sullivan totally shot himself in the foot with his absurd speculation regarding the possibility of General Flynn being charged with treason, it does appear that Sullivan remains focused not only on the misconduct (read: possible criminal conduct) by Team Mueller and the FBI, but also on the legal insufficiency of the charge against General Flynn--False Statements to the US Government, 18 USC 1001.

In that regard, legal tweeter Techno Fog flagged this fascinating exchange--note that the "Kelner" who responds to Judge Sullivan is one of Flynn's attorneys, Michael Kelner:

Near adjournment, Judge Sullivan mentions that he will likely have "many, many, many more questions" - including: 1) how the gov't investigation was impeded 2) What was the material impact of the crimes /end 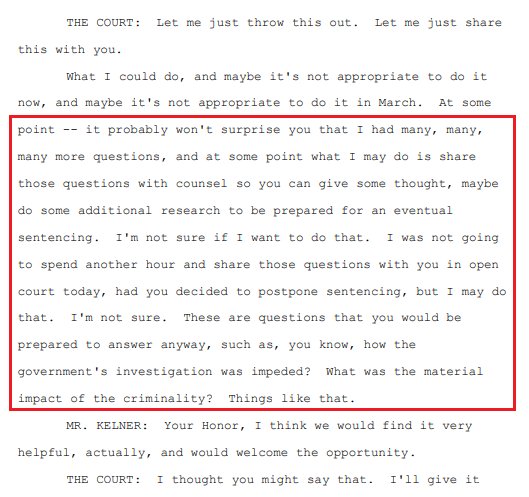 
The important point Sullivan has in mind comes toward the end, when he says:

"These are questions that you would prepared to answer anyway, such as, you know, how the government's investigation was impeded? What was the material impact of the criminality? Things like that."


Obviously Flynn's lawyer, Kelner, likes what he's hearing, is very much in favor of "things like that," and he says so:


"I think we would find it very helpful, actually, and would welcome the opportunity."


The reason Kelner likes this train of thought is because what Sullivan is talking about actually comes very close to the legal insufficiency of the entire case. This doesn't mean that Flynn will be changing his plea, because his statements at this hearing made a future plea change very difficult. Nevertheless, Kelner likes this development because it works to get Sullivan back to the agreement of zero jail time, after Sullivan had suggested that he might ignore that agreement.

But lots of things can change during the three months before the next status hearing, so let's take a quick look at the actual text of "1001", as far as it's relevant to the Flynn case and to Sullivan's remarks:

(a) Except as otherwise provided in this section, whoever, in any matter within the jurisdiction of the executive, legislative, or judicial branch of the Government of the United States, knowingly and willfully—

(2) makes any materially false, fictitious, or fraudulent statement or representation;


The issue that Sullivan was posing to the attorneys is this: if what Flynn said to the FBI had no "material impact" on the government's investigation--did not "impede[d]" the investigation in any way--then how should that affect "an eventual sentencing"?

Obviously this has to do with the fact that the FBI agents showed up at Flynn's office to question him only about things they already knew. That was the strategy agreed upon with their boss, McCabe, and which they adhered to. They questioned Flynn about matters that they already knew--in fact, had a recording of--and if Flynn's account didn't jibe with what was on the recording then they simply repeated Flynn's words.  This was, according to Mueller (p. 3), in order to "prompt a truthful response." Actually, Mueller himself was making a false statement to the court when he wrote those words, because the agents weren't actually attempting to "prompt a truthful response" at all--they were trying to lock Flynn in to an inaccurate statement that could later be deemed a false statement and charged under 1001. They were adhering to McCabe's instructions to not challenge McCabe's responses, but to induce him to say "yeah, uh huh," when they repeated an inaccuracy.

Now, we can agree for the sake of the argument that it's only fair that the lack of any "material impact" of Flynn's words on any investigation should be taken into consideration for "an eventual sentencing." However, more to the point of my previously strongly expressed view of all this, I would maintain that what we have seen here is not an investigation at all. Yes, I know that DoJ officials presented three separate investigative theories to the House, that Mueller claimed that the FBI agents were engaged in "a national security investigation", and that the lawyers for Team Mueller--when challenged by Sullivan on exactly this point--suggested that the FBI had been looking at what might "potentially, potentially" have been a violation of the Logan Act. But we're all adults and any adult with a legal background knows that, as Michael Walther puts it, invoking the Logan Act is "the prosecutorial equivalent of announcing a snipe hunt."

My point is simply this: an investigation is an attempt to ascertain the truth. Here the FBI had a recording of a conversation. They knew the truth when they walked into Flynn's office, and they sought no further truth beyond what they already knew. For Mueller to suggest that they were attempting to ascertain the truth of what had been said in that conversation by questioning one of the participants is utterly disingenuous--something we have sadly come to expect from the agencies and agents of our "Justice" Department lately. An individual's recollection will never be more accurate than a recording. Therefore, the only point in questioning Flynn was to try to frame him up for a supposed false statement and charge him under 1001, and I'm going to say that a fair reading of the 302 leads to the same conclusion the interviewing agents initially expressed: Flynn wasn't lying. He was coerced into a guilty plea by unscrupulous prosecutors.

Now, look at the text of 1001 again. One of the first things it says, and crucially, is: "in any matter within the jurisdiction of the executive." Fine. The FBI is part of the executive branch of the US government, but the jurisdiction of this particular agency, the Federal Bureau of Investigation, does not extend to "any matter"--it extends only to matters for which Congress has given the FBI jurisdiction. Typically, that means the investigation of some crime or matter concerning national security. The inability of DoJ and Team Mueller to come up with a single consistent rationale strongly suggests that this was not an investigation of either a crime or a national security matter over which the FBI has jurisdiction. Yes, the FBI has jurisdiction in national security matters, but only when a threat to that security is involved--as the Attorney General Guidelines clearly state in its introduction. Nobody knew better than the FBI that Flynn's conversations with Ambassador Kislyak posed no threat to national security, and that means that the FBI was acting outside its mandate when it interviewed Flynn. It was setting up a False Statement trap, not conducting an investigation, and that's what Judge Sullivan should be looking at. Hopefully he'll come to that conclusion sometime during the next three months.

Judge Sullivan posed a challenge to the attorneys at the hearing. I suggest that Judge Sullivan faces his own challenge that he may have to face on his own, if justice is to be done and the rights of US citizens are to be protected against an abusive FBI that sees its mission as being a sort of roving Federal truth patrol.

UPDATE: Scott Johnson at Powerline notes that others are aware of the issues raised in this blog:

Why did Comey and the FBI go to such extreme lengths to catch Flynn in a lie, when he had violated no federal law?

Under questioning before the House Judiciary Committee, Comey claimed that the FBI has the duty to “understand why it appeared to be the case that the National Security adviser was making false statements about his conversations with the Russians to the Vice President of the United States.”

But as Gowdy and others made clear, it is not the FBI’s job to make sure politicians tell the truth to each other. If it was, the FBI would be so busy it would never get to its real mission of investigating federal crimes.

Though he resisted this inference during the hearings, Comey’s answer suggests that his order to investigate Flynn was part of a broader counterintelligence investigation into the Trump presidential campaign….


In fact, Mueller, in his sentencing memo reply, did state that Flynn "knowingly made false statements to FBI agents in a national security investigation." But all that really means, in effect, is that it's turtles all the way down. IOW, if the FBI had no proximate reason for interviewing Flynn--and, as I've stated repeatedly, the confusion evinced by DoJ officials strongly suggests that they were at a loss to explain their rationale--then our inquiry shifts further back for the justification. If, as Mueller claims, the interview was part of some "national security investigation," the judge should be asking what the grounds for that investigation were. And if, as seems reasonable, Mueller's "national security investigation" is simply the continuation of Comey's "broader counterintelligence investigation into the Trump presidential campaign," I think we know by now where that ultimately leads us: back to the "dossier." This is one more reason why Flynn's guilty plea does the nation a disservice. We need to get to the bottom of this. Acting AG Whitaker would do well to get this ball rolling.